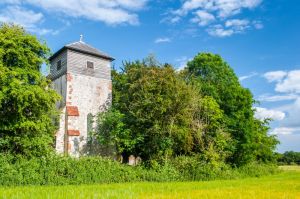 A late 12th or early 13th-century church set in fields, almost unchanged from the day it was built. When St Michael's was threatened by closure some four decades ago, a group of local people formed a charitable trust to look after it. A program of careful restoration undertaken by the trust has revealed very rare 13th-century wall paintings hidden beneath the grime of centuries.

Finding Up Marden church is half the battle - we drove right by it, not realising it was hidden in a belt of leafy trees a hundred yards down a farm track. Luckily we met a local who told us to go back to the top of the hill.

Up Marden isn't so much a hamlet as a few scattered houses and farm buildings spread out over several miles of agricultural land. Lost among the fields is this peaceful relic, slumbering away as if it has been here since the dawn of time and shouldn't be disturbed.

The interior is a delight; it is a simple two-celled building with a narrow nave and chancel, separated by a deliciously narrow triangular arch that might easily be mistaken for Saxon work. It is not; rather it is a hasty emergency repair dating from the 16th century. The original 13th-century arch is immediately above the triangular opening.

On the north wall facing the south door is a large wall painting of St Christopher carrying the Christ child. To the west are further paintings taking up much of the space between the ceiling and the north door, though these are more faded. There is a simple chalice font, upon a modern base, several interesting wall monuments, and an original 13th-century piscina with what looks like a painted consecration cross beside it.

St Michael's is not a spectacular church, far from it. But come here on a sunny afternoon and see if you don't find yourself wanting to linger in the churchyard, put your head back and listen to the birds, and let life slowly meander by; its that kind of place. 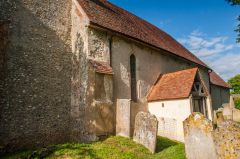 More self catering near Up Marden, St Michael's Church >>

More bed and breakfasts near Up Marden, St Michael's Church >>