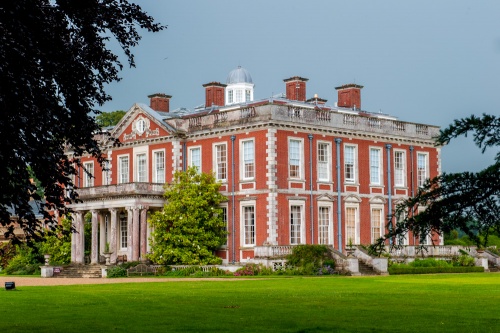 Stansted Park is a delightful 17th-century mansion that recreates the experience of an Edwardian country house. Stansted was built for Richard Lumley in 1688 and rebuilt as exactly as possible following a fire in 1900. Visitors see a variety of formal rooms but also get a chance to see 'below stairs', delving into servants quarters.

The Stansted estate (not to be confused in any way with Stansted Airport in Essex!) dates back to the time of the Norman Conquest. For 5 centuries following the Norman invasion, Stansted was owned by the powerful Earls of Arundel. It then passed to the Lumleys, who owned it for a further 200 years.

The estate was owned by a succession of families until 1924 when Stansted was purchased by the 9th Earl of Bessborough, Vere Ponsonby. The 10th Earl inherited on his father's death in 1956, but in 1983 he gave the house and estate into the care of a charitable Trust.

The house was designed by William Talman for Richard Lumley in 1688, though it has undergone several alterations and additions since then. Most of the major alterations were the work of Richard Barwell, who made his fortune in India before returning to England and purchasing Stansted in 1781.

Barwell, nicknamed 'The Indian Nabob', lavished money on Stansted. He called in Capability Brown to rebuild the house and gardens, and when Brown died, Barwell called on James Wyatt to finish the job.

The result is an elegant Queen Anne style house with a grand portico and the addition of a long wing. Much of Barwell's elegant house was gutted by the 1900 fire, which left the house a ruined shell. Stansted was rebuilt on the existing foundations, to plans by Arthur Blomfield. One of Blomfield's innovations, aside from modern conveniences like electricity and a lift, were the new, spacious servant's quarters.

There are six staterooms on view to visitors. These include the Main Hall, where you will see family portraits, including the sisters Georgiana and Henrietta Spencer, painted by Angelica Kauffmann. Even more impressive perhaps is the Blue Drawing Room, lined in gorgeous blue silk.

Near the house, close to the garden centre, is the 19th-century Gothic chapel, rebuilt in 1804 by Lewis Way. When the chapel, on the site of the medieval chapel built by the Earls of Arundel, was reconsecrated in 1819 the first service was attended by poet John Keats.

I have visited most of the major stately homes in England and most of the 'minor' ones as well, but I have rarely enjoyed myself more than when I visited Stansted Park. Though the day was dull and wet, the house and grounds were a delight. The house felt light and spacious, with an air of dignity and elegance. The interiors were full of interest, and the guides were among the most friendly and helpful I have ever met.

The glimpse into life 'below stairs' was extremely well done. Though many stately homes offer a tour through servant's quarters, Stansted seems to show much more about how the servants lived and worked. If you have small children they will enjoy the quiz - our 10-year-old daughter loved it! It was an absolute delight to visit Stansted Park, and I highly recommend a visit.

More self catering near Stansted Park >>