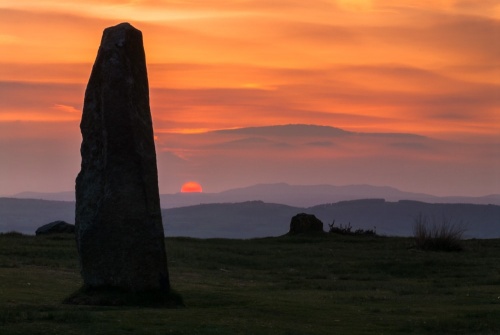 Mitchell's Fold is an ancient stone circle set on a plateau on the Shropshire border with Wales, between Corndon Hill and Stapeley Hill, offering fantastic panoramic views of the Black Mountains of Wales to the west. An outlying stone stands to the south of the circle.

The circle was originally composed of around 30 stones, of which 14 remain. None of the stones is terribly high; the tallest is about 2 metres in height. The circle is about 27 metes in diameter and was erected between 2000-1400 BCE.

Like most stone circles, there are local legends associated with Mitchell's Fold. One legend associates the circle with King Arthur and states that Arthur drew the sword Excalibur from one of the stones at Mitchell's Fold to become king.

Another tale tells that one of the stones was a witch who was turned to stone as punishment for milking a cow through a sieve. The other stones were set around the witch stone to stop the witch from getting away. This legend is carved into a stone at the parish church in nearby Middleton.

Nearby are the remains of Hoarstone Stone circle, composed of 37 undressed sarsen stones.

Our Visit: One of the most glorious evenings of my life was spent watching the sun set beyond Mitchell's Fold Stone Circle. While that shouldn't influence your decision to visit the circle, I'd be remiss if I didn't mention that if the sunset is a good one, the views from Mitchell's Fold are utterly compelling. 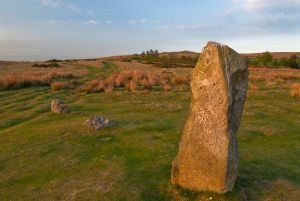