HERITAGE HIGHLIGHTS:   A king was born here, and a Prince who would have been king died here, too. 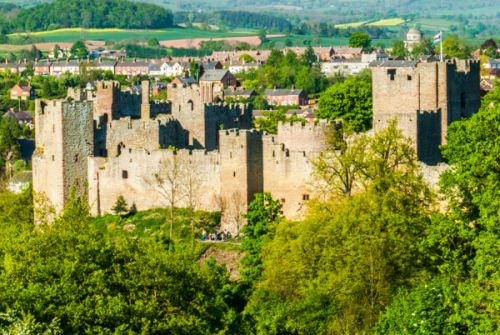 Ludlow Castle stands like a colossus atop a high bluff over the River Teme. The first fortifications here were probably by Roger de Lacy, Earl of Shrewsbury, shortly after 1086. By the time de Lacy was banished by William II in 1095 a curtain wall with defensive towers had been built around a bailey.

Ludlow was built in stone from the beginning, rather than hastily thrown together in earth and timber and later converted to stone as with most other Norman fortresses.

The curtain is defended by a ditch cut into the solid rock of the cliffs, crossed by a single drawbridge. Outside this ditch, or moat, is a larger outer bailey, itself surrounded by an extension of the curtain wall. There is only one large entry through the outer curtain, from Castle Street, while the other sides of the site are protected by the high, steep cliffs.

The outer bailey contains Mortimer's Tower, originally the west gate to the castle, and St Peter's Chapel, added in the 14th century. Within the 11th-century inner curtain wall is a sturdy stone keep, originally used as a gatehouse. Beside the gatehouse is the Judge's Lodging, added in the Elizabethan period. 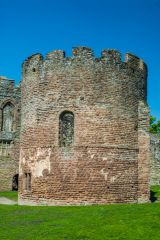 The Round Chapel
Standing in the middle of the inner bailey is the Round Chapel, dedicated to St Mary. This is a very unusual circular building, retaining beautifully carved Norman doorway arches. Although it was not unusual for a Norman church to have a semi-circular apse, building an entire chapel on a circular plan is exceptionally rare.

The round design was inspired by the circular plan of the Church of the Holy Sepulchre in Jerusalem, and St Mary's is one of only five medieval round churches in England. Though the church has been heavily damaged and worn with age, the richly carved arches and capitals make this small building one of the true highlights of early Norman architecture in the country.

The North Range
This part of the castle boasts some of the best surviving medieval domestic buildings in England. The range was begun by Peter de Geneville shortly after 1280, and completed by the early 14th century. It stands against the Norman curtain wall and gives access to the battlements. The core of the range is Roger Mortimer's Great Hall, reached by a set of stairs from the bailey. The hall is lit by three large windows on both sides and is open to the rafters. Heat was provided solely by a central hearth. Below the hall is an undercroft used as a storage area. 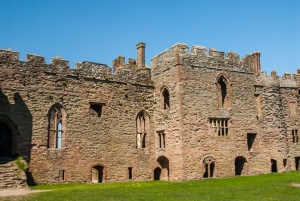 On either side of the Great Hall are wings with smaller chambers for accommodation. The Solar Wing housed private quarters for the lord and lady of the castle. A later Great Chamber Wing took over that function and parts of the Solar Wing were converted to a storeroom and buttery, or food storage area. The kitchen was in an entirely separate building, which was inconvenient but lessened the ever-present risk of fire.

The original medieval buildings were rebuilt by the Council of the Marches in the 16th century, when the Great Chamber Wing became the private residence of the Lord President of the council. The Great Hall was kept, but fireplaces inserted along the walls to replace the central hearth.

History
Ludlow's location in the turbulent Welsh Marches led to inevitable conflict. In 1138 supporters of Queen Maud held Ludlow against King Stephen. The king laid siege to the castle but was unable to take it.

A fascinating story of the siege tells us that one of the defenders threw a grappling hook down from the gatehouse tower. The hook snared the son of the King of Scotland, who was fighting with Stephen's army. He was about to be hauled up the wall into captivity when King Stephen himself rescued him.

In the mid-12th century three powerful Marcher lords claimed the castle; Walter de Lacy, Hugh de Mortimer, and Joce de Dinan. Joce rode out to ambush and capture Mortimer, but in his absence, de Lacy marched in and occupied the castle. Dinan in turn laid siege to Ludlow but could not dislodge the de Lacy garrison. 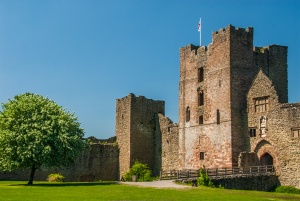 The Keep and outer bailey

Roger Mortimer inherited Ludlow in 1316, and many of the domestic buildings within the inner bailey were erected during his ownership. Mortimer was executed in 1330 by Edward III but the Mortimer family retained their estates. The male line died out in 1425 and Ludlow was granted to Richard, Duke of York. During the Wars of the Roses, the duke's soldiers suffered a heavy defeat at Ludford Bridge, just outside the town, and Ludlow was sacked.

But better days were ahead; when Richard's son took the throne as Edward IV Ludlow became the administrative centre of the Council of the Marches.

Edward sent his youngest son, also named Edward, to Ludlow to act as a royal figurehead in the region. But Edward and his elder brother Richard, the "Princes in the Tower", were kept here before they were removed to the Tower of London. After the Tudors took the throne, Henry VII sent his heir, Alfred, to Ludlow, just as Edward IV had done before him. Sadly, Arthur died at Ludlow, leaving the throne to his younger brother, Henry VIII.

The castle sustained heavy damage during the Civil War, but the Council of the Marches continued to use it as their base until the council was abolished in 1689.

Visiting
One thing that you won't find out in most guides to Ludlow Castle is that there are two great places to view the castle from a distance. One is from the riverside directly below the castle, immediately north of Dinham Bridge, where there is a small green space and riverside path.

Our family spent a magical couple of hours relaxing by the river here on a long summer evening, and the castle reflected in the water below is an absolutely stunning sight. The other good place to get a sense of the sheer scale of the castle is from the hillside on Whitcliffe Road, on the opposite bank of the River Teme. The slope of the hill offers wonderful views over the town of Ludlow across the river.

It is well worth strolling around the town of Ludlow itself. Quite apart from the historic buildings, which are stunning, the town is an excellent example of Norman town planning. For there was no town here when the castle was built; the regular grid of streets outside the castle was carefully laid out by the Normans.

VIEWS FROM THE BATTLEMENTS 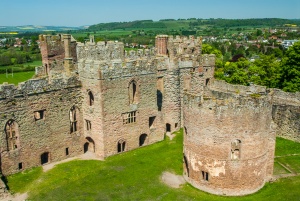 The Round Chapel and North Range 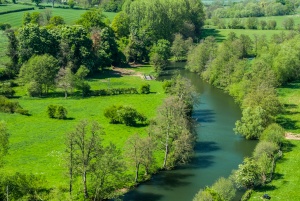 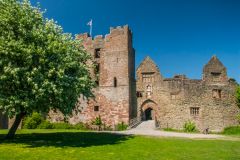 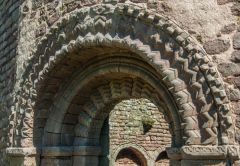 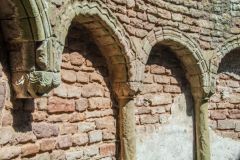 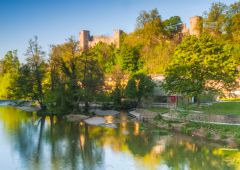 More self catering near Ludlow Castle >>

This attractively presented semi-detached cottage is located in a quiet cul-de-sac within 10 minutes? walk of Ludlow town centre and can sleep five people in three bedrooms.
Sleeps 5 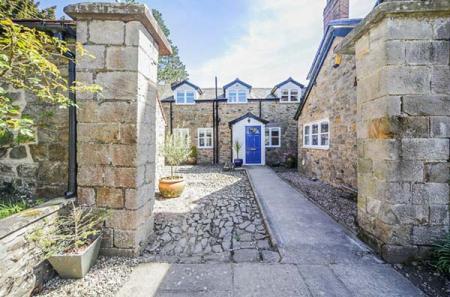 This Grade II cottage is in the village of Knowbury near to Ludlow and can sleep four people in two bedrooms.
Sleeps 4