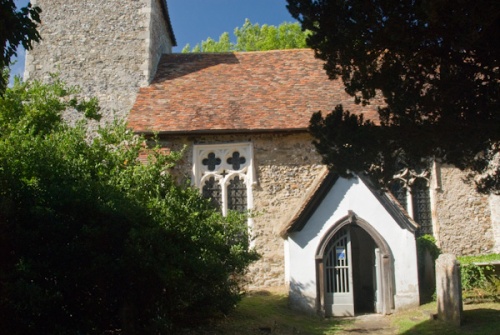 The ancient church of St Mary, Fordwich, is no longer used for regular worship, but its historical importance has been recognised and the church is now cared for by Churches Conservation Trust.

The church stands beside the River Stour, surrounded by trees, so that only the shingled spire can be seen from a distance. The exterior of the church is a bit of a hotch-potch, composed of Kentish ragstone, flint, brick, tile, stone, and render. There is a plain west tower, where you can see traces of a pre-Conquest entrance, now blocked up.

There is a gabled north aisle, added in about 1200. In this north aisle are two narrow Saxon windows. There is also a larger three-light window from 1503.

The chancel is lit by a pair of 13th-century windows and a larger 15th-century window. The south porch may be 14th century, but it has been much remodelled over the years.

The arcade separating the nave from the north aisle is supported on pillars dating from the 13th century, or possibly earlier. Over the door of the tower arch is a set of bread shelves. These were used to store bread to be given to the poor every week, according to the terms of a bequest from Thomas Bigg, who died in 1669.

These and other bequests are recorded on a set of benefaction boards on either side of the tower arch. These make fascinating reading. They include a gift by Stephen Bigg (d. 1646) of 20 shillings annually, to be given to 'six poor householders in Fordwich and 6 in Sturry from land rent', and also to provide funds for poor boys and girls to become apprentices. These bequests, most from the 17th century, are still fulfilled each year. 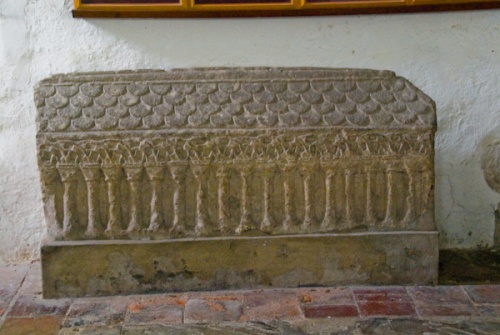 The interior of St Mary is filled with attractive box pews, most of which can be dated on stylistic terms to the 18th century. The easternmost pew on the north side of the nave belongs to the Corporation (the town government). Here you can see a wrought iron holder for the corporation's gilded mace, which is displayed each year on Mayor's Sunday.

The tympanum above the chancel arch is painted with a royal coat of arms of 1688, and the text of the Ten Commandments. In the north aisle is also the parish chest, probably 17th century. The font is of ancient origin, probably 12th century. It is a solid square bowl structure of grey Bethersden marble, topped with a 17th-century cover.

The quatrefoil windows in the nave, and the north-west window of the north aisle, retain medieval stained glass, most of it from the 14th century.

There are several interesting memorial brasses about the church, including an effigy of Aphra Hawkins, who died in 1605. Her effigy shows her clad in lovely period costume, standing on a pedestal beneath her coat of arms. There are also three hatchments, including two from the 17th century; those of Robert Darrell (1688) and Valentine Norton (1650).

And now we come to the reason that most people will visit St Mary church; the mysterious Fordwich Stone. This fascinating treasure is located against the north wall of the north aisle. It is a very narrow rectangular block of limestone, 1.7 metres high (about 5.5 feet), covered in exquisite carvings to represent a dummy tomb.

The stone has traditionally been known as St Augustine's tomb. St Augustine was a 6th-century missionary who did much to bring Christianity to Britain. He died and was buried at St Augustine's Abbey at Canterbury, from whence the stone is alleged to have come.

A tomb-shaped stone like this would have been placed over the relics of an important figure such as a saint, so it is always possible that the Fordwich Stone was actually used to denote the final resting place of Augustine.

No one knows when the stone first came to Fordwich. It is known that it was removed to Canterbury Cathedral after 1760, and then returned to Fordwich in 1877. It is, without doubt, a shrine, but was it the shrine of St Augustine? We shall never know for certain.

The stone is beautifully carved, with rounded shingles on the sloping top, giving way to rows of classical pillars in the central section of the stone, which rests on a plain base. It truly is a wonderful piece of craftsmanship, and well worth coming to see.

St Mary's Church stands beside the Fordwich Arms and the timber-framed Town Hall, on the bank of River Stour. Parking is just about impossible in Fordwich, but I can highly recommend strolling the Stour Valley Walk footpath from nearby Canterbury.