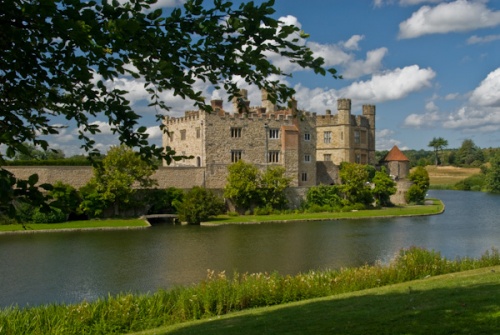 A former royal palace begun in the 12th century, Leeds Castle has to be one of the most beautifully situated medieval castles in England, projecting into its natural lake, and surrounded by 500 acres of beautiful parkland and gardens. Leeds has been owned by a succession of monarchs, and no less than six queens of England.

There was a Saxon royal manor here as early as 857 AD, After the Norman invasion, the manor was held by the Crevecoeur family (literal translation, "breakheart"), who rebuilt the manor as a stone dwelling. That early castle saw action during the turbulent conflict between King Stephen and Queen Maud, and in 1139 Stephen captured it from Maud's supporters.

From 1278 the castle belonged to the crown. In that year Edward I began building the barbican and the unusual fortified mill. Edward gave Leeds Castle as a dower gift to both his wives, Eleanor and Margaret, thus starting a tradition that frequently saw the castle owned by the queen of England.

Among queens who have owned Leeds Castle (apart from Eleanor and Margaret) are Isabella of France, Joan of Navarre, Anne of Bohemia, and Catherine of Valois. Despite ostensible royal control, Isabella, queen to Edward II, was refused entry by the constable of the castle in 1321.

The king had to besiege the castle to wrest it from the constable's power. He also wrested the constable's head from his shoulders! From that point, Leeds seems to have gained a reputation as being a "ladies castle". 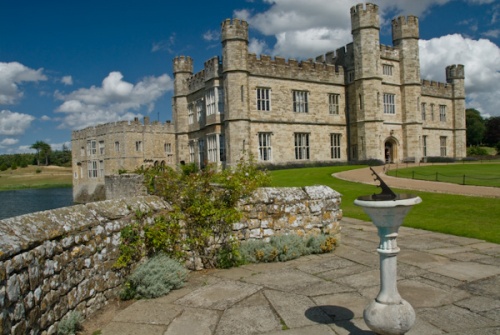 Leeds Castle was greatly enjoyed by Henry VIII, who added many of the Tudor windows. Henry stayed at Leeds on his way to his famous meeting with Francis I of France at the Field of the Cloth of Gold in 1520. Marvellous paintings in the Banqueting Hall portray the event.

After Henry's death, the castle was granted to a courtier by Edward VI, and it passed out of royal control forever. Over the years it saw service as a garrison, a convalescent home, a prison, and an opulent private home. Some of the most powerful families to own the property include the Wykham Martins, Culpeppers, and Fairfaxes.

In the 17th century, the castle was sold to Sir Anthony St. Leger, whose descendants built an estate house on the largest of the islands in Leeds lake. This house was later sold to the Culpeper family, who successfully managed to support both sides in the Civil War and the subsequent Restoration.

Finally, in the 20th century, the house passed to Olive Wilson Filmer, Lady Baillie, who spent considerable time and money refurbishing the interior and turning the living quarters into a sumptuous treasure trove stocked with ceramics, paintings, furniture, and tapestries.

Lady Baillie was a famous society hostess in the 1920s and 1930s, and many famous guests stayed at Leeds Castle during her tenure. It was Lady Baillie who established the Leeds Castle Foundation, which has administered the castle since her death.

The castle is set on a pair of small islands in a large lake. The lake is probably not natural, it was created sometime before 1272. The bulk of the buildings are still as they were laid out by Edward I, with later additions by Henry VIII, and a good deal of Victorian work to make the effect a bit prettier and less fortress-like!

The lake narrows to form a moat crossed by a drawbridge to an imposing gatehouse. Beside the bridge are the ruins of an unusual barbican with arches for the three roads that used to converge on this spot. 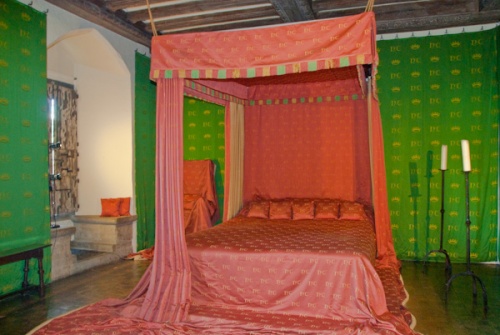 Within an outer bailey are two residential blocks, Maiden's Tower, built by Henry VIII, later used as a bakehouse, and a massive neo-Gothic block added by Fiennes Wykeham-Martin around 1820. This opulent block of rooms stands on the foundations of medieval apartments. Beyond this mansion, a passage leads to the smaller island. This passage replaces an earlier causeway and drawbridge.

On the smaller island is a D-shaped shell keep known as the Gloriette, built around a small courtyard. The lower parts of the keep were the work of Edward I, but the upper sections were rebuilt by Henry VIII. Though the interior contains some original timbers and panelling, it has been largely altered by subsequent generations to create a comfortable dwelling place.

The extensive parkland surrounding the castle was landscaped in the early 18th century. Many of the trees that were planted then still remain. The park is split by streams and lakes that are home to over 30 species of waterfowl. The Duckery provides habitat for ducks, geese, and swans. There is a lovely woodland garden, at its best in spring when daffodils, narcissi, and anemones are in bloom, and an English Cottage Garden. Leeds Castle is also home to the National Collection of Bergamot.

In the gardens is the yew Maze, planted and trimmed to resemble a topiary castle. Within the Maze is a secret underground grotto. The Leeds Castle vineyard was mentioned in the Domesday Book, and after a break of five centuries, the fruits of the vineyard are once again being used to produce fine wine.

Younger children especially will enjoy the maze, which exits through an underground grotto with appropriately eerie lighting effects. They will also enjoy the regular falconry exhibitions involving birds of prey from the aviary. There is a pay and play golf course, hot air balloon flights, a vineyard, dog collar museum, craft centre, and 'Go Ape', a high wire forest adventure area.

Leeds Castle is a very popular attraction, especially on sunny summer weekends, but it is well worth a visit at any time; the combination of a beautiful setting and a superlative historic treasure of a castle makes for an unforgettable day out. 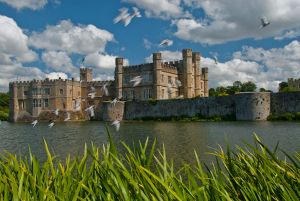 More self catering near Leeds Castle