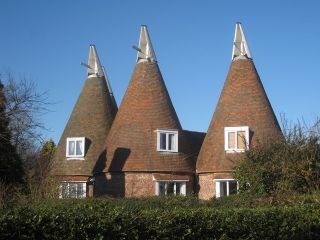 Ewhurst
Ewhurst is a large village just east of Cranleigh, near the Surrey border with East Sussex. It lies on the edge of the Weald. The name is a combination of the Old English 'iw', for yew, and 'hyrst' for a wooded hill, so perhaps the name might be translated as Yew Wood.

The earliest settlement in the area was at Holmbury Hill, where the remains of an Iron Age hillfort have been discovered. The Roman road of Stane Street runs through the parish, and a villa has been excavated at Rapsley.

The village of Ewhurst developed in the late Saxon period. At the time of the Norman Conquest, it formed part of the royal manor of Gumshall. Continued growth during the early medieval period led to Ewhurst splitting off as a separate parish in 1291.

The heyday of Ewhurst's wealth was the late medieval period when the Weald was a centre for ironworking and glass-making. This prosperity resulted in the numerous examples of half-timbered houses to be seen in the area.

The parish church of St Peter and St Paul dates to at least 1121 and perhaps earlier. The doorway is Norman, the font may date to the 13th century, and the pulpit is Jacobean.

More self catering near Ewhurst >>

More bed and breakfasts near Ewhurst >>