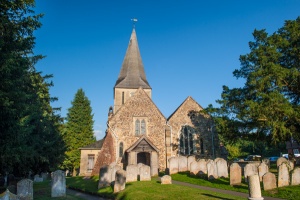 It is hard to imagine a more beautiful English village than Shere, sitting astride the River Tillingbourne, and the church of St James perfectly compliments the array of timber-framed and whitewashed cottages that line the lanes of Shere. 'A History of the County of Surrey calls St James' church 'second to none in Surrey for beauty and antiquarian interest', and you wouldn't get any argument on that assessment from me.

There was almost certainly a Saxon church here, but the current church of St James dates to around 1190 and is cruciform in plan. The church is approached up a cobbled lane, though a lych gate designed by Edwin Lutyens in 1902. Lutyens would go on to become one of the foremost architects in Edwardian England, designing, among other highlights, the Cenotaph in Whitehall, London.

Lutyens designed quite a few cottages in Shere for the Bray family, hereditary Lords of the Manor. The walls are a fascinating jumble of materials, from re-used Roman tiles to clunch, flint, Caen stone imported from Normandy, Tudor bricks, and local stone. 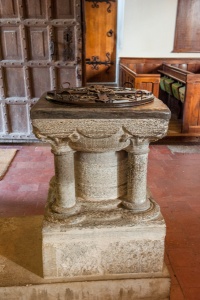 The central tower dominates the surrounding period cottages. The base of the tower is Norman and the striking spire was built between 1213 and 1300. To the Norman nave was added a south aisle and chapel in the 13th century, while the chancel is 14th century, sensitively restored in the Victorian period by S Weatherley.

A small south porch made of brick and timber protects a Norman doorway and an original 12th or 13th-century door, studded with nails. Outside the west end is an external stair leading to a gallery, added in 1748 for the parish poor.

The gallery occupies much of the west end of the nave interior and seems to float above the floor with no supporting legs. A timber west porch dated to 1547 leads to a ragged and worn west doorway of the 13th century, and the door itself to 1626.

The Anchoress of Shere

A quatrefoil opening in the north wall of the chancel once communicated with a small anchorite's cell linked to the church. The 'Anchoress of Shere' was Christine Carpenter, who was enclosed in her cell in 1329. She received gifts of food through a grate on the outside wall and could view mass at the high altar through a narrow squint and receive sacrament through the quatrefoil opening. 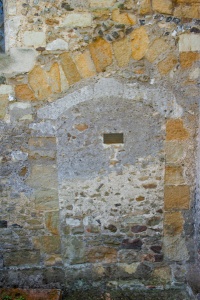 Remains of the Anchoress
of Shere's cell

The story of Christine Carpenter is fascinating and sheds light on the phenomenon of anchorites in the medieval period. Christine was the daughter of William, a carpenter of Shere who lived in Willow and Ash cottages on the banks of the Tillingbourne.

She petitioned the Bishop of Winchester to grant permission for her to be walled within a small cell attached to the church, with a small opening allowing here to view the high altar during services. A copy of the Bishop's proclamation is set on the north wall of the chancel, near the squint that once allowed Carpenter to see into the chancel.

The Bishop calls on the rector and parishioners of Shere to gather together and investigate whether Christine was clear of any encumbrance, such as a legally binding engagement to marry. The gathering was obviously positive, for on 19 July 1329 he gave permission for Christine Carpenter to be walled up in her cell.

The story does not end there, however, for after 3 years it seems the Anchoress had had enough of her life of seclusion and she decided to leave her cell. To go back on her vows must have taken enormous courage, for it was akin to an act of sacrilege. We do not know when she took that step, only that she 'had left her cell inconstantly and returned to the world'.

Yet she must have had a change of heart, for on 10 November 1332 we find the Bishop agreeing to her request to be returned to her cell. But he agreed upon certain conditions, among them that Christine serve penance in proportion to her sin (of leaving the cell), and that if she neglected to come forward to ask for her penance that she be excommunicated. And that is the end of our information on the Anchoress of Shere. 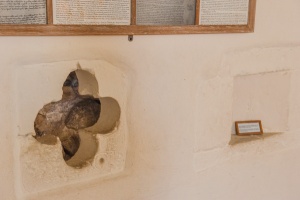 We know she appealed to be re-sealed in her cell, and can only assume that the act was carried out. But we do not know how long she was there or when she died. Even more intriguingly we do not know why she left her holy life in the first place or why she appealed to return to her cell. What lies behind the surface of her story?

You can clearly see where the anchoress's cell was attached to the church wall, and the quatrefoil and squint can be seen on both sides of the chancel wall. A fictionalised account of Christine Carpenter's life is told in the 1993 film Anchoress, starring Natalie Morse.

Though the exterior is fascinating, it is the interior of St James that really deserves attention. There is a huge oak chest dating to about 1200 AD, with three locks; one for the rector and two for churchwardens, used for storing parish documents and church plate.

It was probably made in accordance with a papal bull of Pope Innocent III demanding that alms be collected to aide poor Crusaders. Windows in the Lady Chapel and chancel contain fragments of medieval glass including arms of the Clare, Butler, and Warenne families.

Other windows show the red rose of Lancaster, placed here when the Shere estate was owned by James, the 2nd Earl of Ormond, in the 15th century. 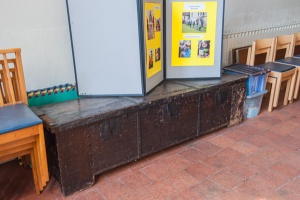 The square font made of Purbeck marble probably dates to around 1200 AD also. In the chancel are memorial brasses from the 15th and 16th centuries, including that of John Redford and his family. There are further brasses to John, Lord Audley (d. 1491) and Robert Scarcliffe, Rector of Shere, who died in 1412, and a 15th century brass to Oliver Sands is fixed to a window sill in the north transept.

Another highlight is a 2-inch high statue of the Madonna and Child dating to 1300, thought to have come from a pilgrim's staff or a Bishop's crozier. This was dug up by a dog on Juniper Hill, Coombe Bottom, in 1880 and is very similar to one in the British Museum. We do not know how it came to be lost, or what its significance is, but it is clearly a very fine piece of medieval craftsmanship.

On the east wall is a monument in neo-classical style to Thomas Duncombe (d. 1714), and a very touching memorial to 4 of Duncombe's 9 children, two who died in infancy, one at 6 years, and another, a daughter Elizabeth, who died in childbirth aged 20, in 1690. A gilded skull and crossed bones decorate this moving memorial beneath the motto 'Momento Mori', 'Remember that you will Die'.

In the south aisle is The Bray Chancel, named for the Bray family who were Lords of the Manor at Shere from 1487. Their symbol was a hemp bray, a tool used to separate fibres of hemp to make ropes. You can see the bray symbol throughout the church and on the eaves of the lych gate.

The Battle of Shere

In 1258 the Bishop of Winchester, Aymer de Valence, ordered 50 of his men to take valuables from Shere church and carry them to France. A band of local men tried to stop the theft, and one of them was killed at the 'Battle of Shere'. The inhabitants sued the Bishop, but De Valence was able to gain a pardon for all his men.

St James church was recently seen in the film Bridget Jones: The Edge of Reason.

More self catering near Shere

More bed and breakfasts near Shere