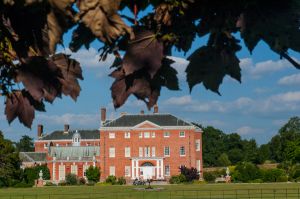 Hatchlands Park
A beautiful 18th-century mansion with interiors by Robert Adam, Hatchlands features the Cobbe Collection of rare and unusual keyboard instruments; probably the largest such collection in the world. A landscaped park designed by Humphry Repton is a backdrop for more formal gardens by Gertrude Jekyll. The house was built in 1750 by Admiral Boscawen, hero of the Battle of Louisburg.

The Hatchlands estate was mentioned in the Domesday Book of 1086, and for over 800 years it was held by the Abbey of Chertsey. After the Dissolution of the Monasteries, Hatchlands passed through the hands of several private owners until in 1749 it was purchased by Edward Boscawen, third son of Viscount Falmouth and Admiral in the Royal Navy.

Boscawen was one of the most successful British naval commanders of the 18th century, and would shortly become famous for victories over the French at Louisburg and Lagos Bay. When Boscawen and his wife Fanny bought Hatchlands, the existing house dated back to the Tudor period.

In 1756 they called in architect Stiff Leadbitter to design a new, fashionable residence, suitable for their status in society. While Leadbitter was designing the elegant Georgian house, the Boscawen's called upon a young, untried architect named Robert Adam to design the interiors.

This was one of Adam's first major commissions, and he showed the same sure touch and wonderful sense of neo-classical beauty that would make him the most sought-after and successful country house architects of all time. Adam used naval themes throughout, with decorative dolphins, anchors, sea-nymphs and nautical symbols through a range of elegant rooms. 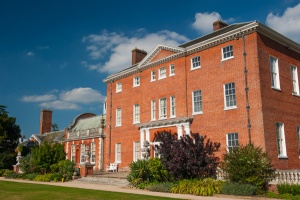 Unfortunately, Admiral Boscawen never got much of a chance to enjoy his new house, for he died in 1761. His widow Fanny sold Hatchlands to the Sumner family, who held it until 1888 when Stuart Rendel, MP for Montgomeryshire, purchased the property.

Rendel embellished much of Adam's earlier work with gilding and colouring, and called in architect Reginald Blomfield to add a Music Room to the house. Rendel's descendant, Harry Goodheart-Rendel, gave Hatchlands to the National Trust in 1945.

It was at first rented out, then in 1982 a small number of state rooms were opened to the public. The trouble was, the rooms were poorly furnished, and did not give a real sense of what it would have looked like in its Robert Adam heyday. But help was at hand, for in 1987 the house was let to Alec Cobbe, who loaned the Cobbe Collection of historic musical instruments to the Trust.

The Cobbe Collection is one of the finest single collections of keyboard instruments in the world, and the combination of the Adam interiors and the Cobbe keyboards make for a superb visiting experience.

Like many of the major rooms on show at Hatchlands, the Dining Room originally had another purpose; in this case, it was Admiral Boscawen's bedroom. The decoration by Alec Cobbe is based on Carlton House in London. The main feature in the Dining Room is a huge portrait of the famed actress Sarah Siddons by Joshua Reynolds, entitled 'Sarah Siddons as the Tragic Muse'. 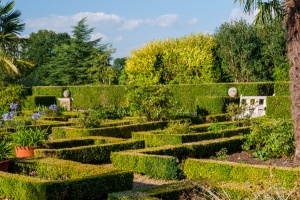 A formal parterre near the house

Robert Adam created this room to be Admiral Boscawen's dining room. The Boscawen's probably commissioned the gilt console tables supported on eagle columns, the two most important pieces of furniture in the house when it was given to the National Trust.

The focal point of the chamber is a chimneypiece carved by John Rysbrack or Michael Spang. Lord Rendel added the gilding to Adam's painted white ceiling around 1890. The walls are hung with red silk, to create a good contrast for a wonderful collection of Old Master paintings brought from Ireland by the Cobbe family.

Originally a drawing room, this chamber features a lovely Adam ceiling modelled after that of the Villa Pamphili in Rome. The Adam original was white, but as with so many of the other ceilings at Hatchlands it was coloured by Lord Rendel. 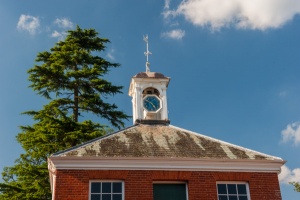 The Music Room exterior and cupola

Commissioned by Lord Rendel in 1903 and built by Sir Reginald Blomfield, this wonderful, spacious room is that of the public rooms at Hatchlands. Personally, I think they saved the best for last. It is filled with instruments from the Cobbe Collection and flooded with light from a domed ceiling high above.

The room is decorated with wonderful swag carvings by Aumonier in the manner of Grinling Gibbons, and the walls are hung with portraits of famous musicians and composers. Regular lunchtime and evening concerts are held in the Music Room, using the historic instruments that you can see on display.

Rather than a typical collection of diverse keyboards, the Cobbe family collected instruments associated with famous musicians, conductors, and composers. So among the 40-odd instruments on display are a virginal made for King Charles II and bearing the initials of Whitehall Palace. This keyboard would have been maintained by Henry Purcell after 1672.

Other highlights include a piano belonging to JC Bach (1778), a square piano owned by Marie Antoinette of France (1786), and a grand piano owned by composer Gustav Mahler (1836). Another grand piano (1847) was used by Frederick Chopin for public performances in England, and another (1794) by Joseph Haydn. There is a table piano use by Bizet for composing, and an upright piano owned by Franz Liszt (1873).

Perhaps one of the most intriguing pieces is a harpsichord made by Andreas Ruckers of Antwerp about 1636; it looks almost too delicate to touch, but it is played regularly. The earliest piece on show is a harpsichord made in 1622 by Girolamo Zenti. Zenti designed instruments for the Medici in Florence, for Louis XIV in France, and for Charles II in England. 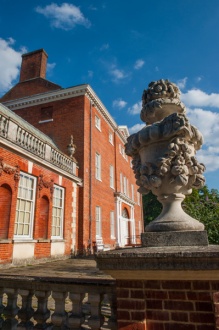 Most of the keyboards are maintained in playing order and can be heard in regular concerts at Hatchlands. Unfortunately, these instruments understandably fall under a 'look but don't touch' policy, so ordinary visitors can admire them and read about their history, but not play them. One instrument that is very much 'hands-on' is a marvellous chamber organ in the Music Room.

The organ is by the Walker company and stands in a fabulous carved case of mahogany and metal that takes up almost an entire wall of the room from floor to ceiling.

When we passed through the Music Room the guide asked if we played. I don't, but my son does, so he sat down at the organ and entertained the staff and visitors for 5 minutes. The effect was stunning; the sound seeming to swell and envelope the entire house.

You can really divide the grounds at Hatchlands into two parts. Close to the house are marvellous parterre gardens designed by Gertrude Jekyll for Lord Rendel in 1900. The south parterre was designed as a 'flower garden for June'.

As you might tell from the photographs accompanying this article, it looks pretty good in August, too! Beyond the formal parterre is a wide expanse of lawn dotted with carefully arranged trees and a few eye-catching ornaments such as a domed classical temple tucked into a green arcade of trees.

Beyond the formal lawns is the park, laid out by Humphry Repton around 1800 for William Sumner. The park covers 430 acres. One of the major elements of the parkland is Fanny Boscawen's Walk, laid out by the Boscawens themselves, and particularly good for spring flowers. There are waymarked walks through the park, which includes several water features and woodland. 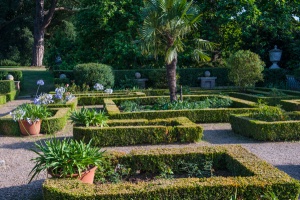 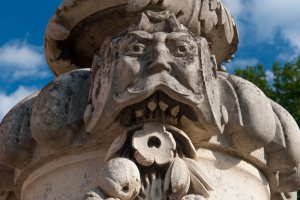 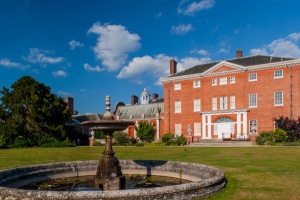 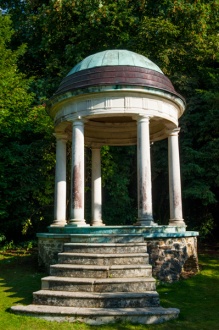 Classical temple in the garden 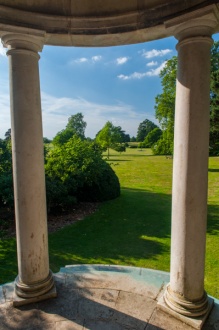 Inside the garden temple 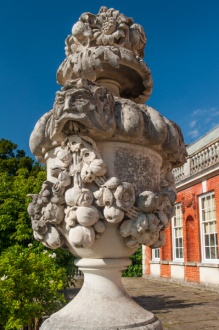 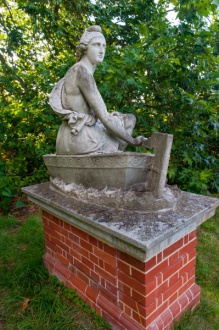 A classical statue in the grounds

More self catering near Hatchlands Park >>