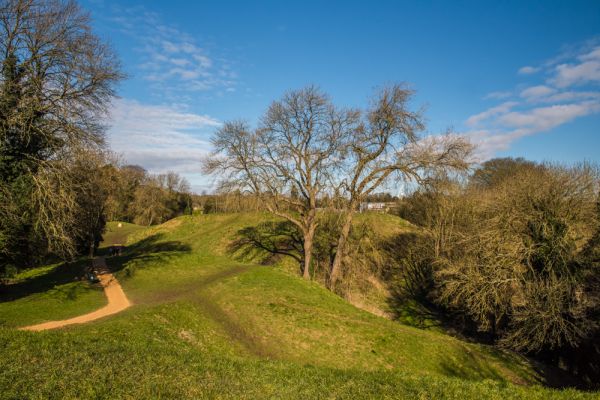 Cirencester Roman Amphitheatre from the east

One of the largest Roman amphitheatre sites in Britain, with seating for over 8000 spectators. We do not know for certain what events took place in the amphitheatre, but records from elsewhere in the Roman Empire suggest that blood sports such as bear, dog, and bull-baiting were common, as were public executions and gladiatorial contests.

The amphitheatre was constructed in the late 1st or early 2nd century, at a time when the Roman Corinium (modern Cirencester) was the second largest and most important city in Britain after London. The site chosen was just outside the Roman city walls, on the site of a quarry. 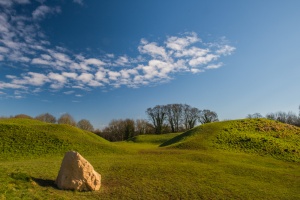 The south-west entrance to the amphitheatre

The amphitheatre is built of two curving earth banks overlooking a central performance area. The earth banks were reinforced with dry stone walls and timber planks supporting wooden seats. Beyond this was a standing area for spectators.

After the departure of the Romans, the amphitheatre was fortified against ultimately successful incursions by the Saxons. In the 18th century, the area was used for bull-baiting, which gave rise to the local name of 'The Bull Ring'.

The area is grassed over, and, despite the overall size of the site there are few obvious remains of the original amphitheatre seating arrangements beyond the shape and size of the earthen banks.

After years of neglect, the local authority has completely restored the site and added signs at each entrance, with illustrations showing the layout of the site and how it was used. You can walk along the top of the earthen banks for excellent views over the site.

I've visited the amphitheatre several times, and I'm more impressed each time I see it. The site is huge! If you stand on top of the bank and close your eyes you can imagine 8000 people crammed together to watch their rather bloody entertainment. 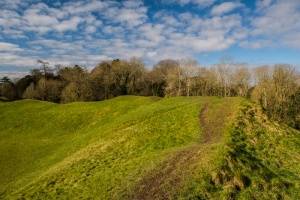 Atop the north bank of the amphitheatre

There is a signpost and wooden gate in the stone wall that fringes Cotswold Avenue. Immediately east of the entrance is a fascinating obelisk without an inscription. The obelisk is something of a mystery; no one knows when or why it was erected.

One theory is that the monument was an unwelcome birthday gift to the Earl of Bathurst, another that the Earl erected the obelisk as a folly for Cirencester Park, but decided not to use it on the advice of Alexander Pope. Another, more prosaic theory, suggests that it marked a parish boundary. A footpath links the obelisk and the amphitheatre sites.

The amphitheatre is well signposted from nearby roads, but there is no dedicated parking area. In fact, I drove past the site entrance twice before I realised where it was. The best access point is on Cotswold Avenue at grid reference SP020012, opposite the entrance to Martin Close. The nearest postcode is GL7 1XY. 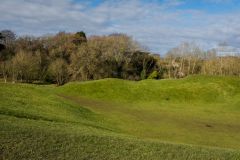 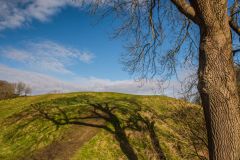 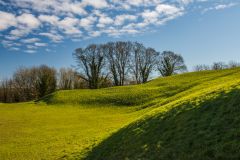 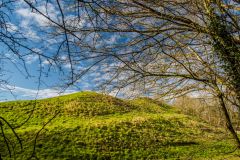 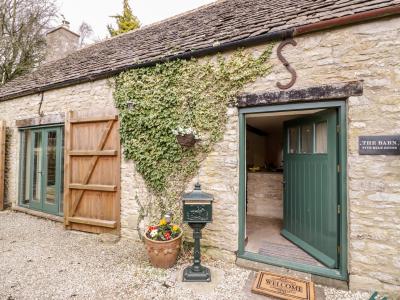 This detached cottage rests near Cirencester and can sleep six people in three bedrooms.
Sleeps 6