HERITAGE HIGHLIGHTS:   The last remnant of Cirencester Abbey above ground 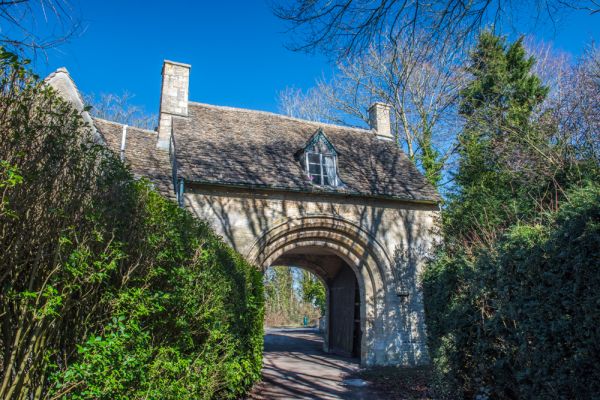 At the northern extremity of Abbey Grounds in historic Cirencester stands the last remnant of Cirencester Abbey. The Norman Arch was built in AD 1180 as a gateway to the Augustinian Abbey of St Mary and is now the oldest standing building in the town, and the only part of the abbey still standing above ground. The arch and attached gatehouse stand on the south bank of the peaceful River Churn, in a public park formed from the old abbey grounds. 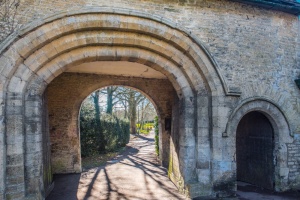 The outer face of the Arch

The abbey was founded by Henry I around AD 1117, on the site of a Saxon church which in turn stood on the site of a Roman church. The abbot became Lord of the Manor of Cirencester, and was granted the right to hold wool fairs. The abbey prospered, much to the annoyance of the townsfolk, who felt that the abbot exercised too much authority. Conflict between the townsfolk and monks continued throughout the medieval period.

The abbey survived until the Dissolution of the Monasteries under Henry VIII, and was dissolved in 1539. Henry VIII sold the abbey to Roger Bassinge, then in 1564 Dr Richard Master, physician to Elizabeth I, purchased the abbey lands, including the Norman Arch. Master is best-known for donating the Boleyn Cup to the parish church of St John the Baptist. 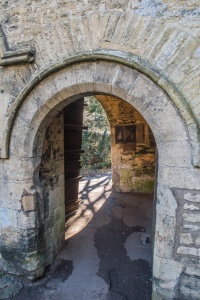 The Master family later erected a substantial house and landscaped the abbey grounds as a landscape park. The house is gone now, but the landscaped grounds are now a public park. You can still see vestiges of the medieval abbey fish ponds by the river.

The arch saw military action in 1643, when Prince Rupert captured Cirencester not once, but twice in the course of the year. The arch saw somewhat more vicarious action during WWI when it was used on a postcard sent to local soldiers in the trenches.

In 1948 the Arch was one of the first historic buildings in England to be given Grade I listed status for its historic value. In 1964 the Arch was offered to the town council by the Master family in memory of Col. Chester-Master.

In 2006 the town council decided to sell the Arch to a private owner. Concerned citizens formed a charity to fight the sale. After vigorous protests and petitions they were successful, and the council leased the property to the Vivat Trust, which preserves historic properties of unusual interest.

The gate has a large central arch, with a small pedestrian arch on the outer face. The pedestrian arch does not lead through the gateway, but instead leads into a large opening under the archway, joined to the central arch. It won't take more than a few minutes to view the arch, but it is still worth a stroll through the park to see, and a reminder of the once-powerful abbey that for centuries was at the heart of Cirencester's history.

A pleasant 10-minute walk through the Abbey Grounds leads you to the last surviving section of the original Roman wall of Cirencester.

The Norman Arch is signposted from the entrance to the Abbey Grounds, just behind the parish church of St John the Baptist. Near the entrance is the site of the abbey church, marked out in stones on the turf.