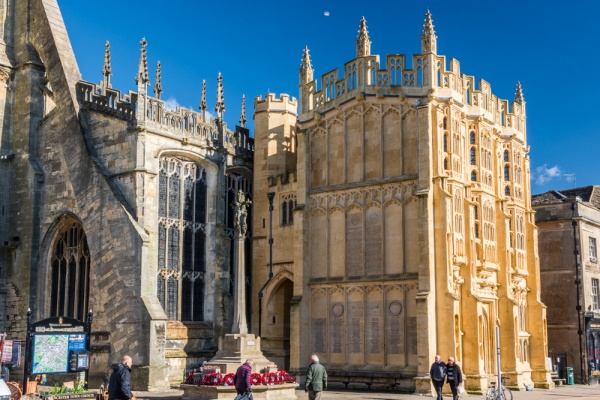 Often called the 'Cathedral of the Cotswolds', St John the Baptist, Cirencester, is one of the largest and most elegant medieval churches in the county, if not the entire country.

Cirencester was a regional capital at the time of the Roman occupation of Britain. The Romans built the first known church here, though we cannot be certain of its location. The Roman church was destroyed by the Saxons when they gained control of the area after the Battle of Dyrham in 577 AD. 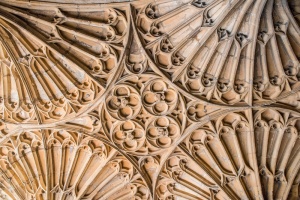 Fan vaulting in the south porch

The Saxons built a church in this location, which stood for over 400 years. Then, in 1117 AD King Henry I founded an abbey and parish church to replace the old Saxon church. The abbey is gone now, though remnants can be seen in the Abbey Grounds beside the current church building.

King Henry's church was rebuilt around 1240, and again in Perpendicular Gothic style around 1520. It is largely this church that we see today.

St John the Baptist is notable for its numerous medieval chapels. Chief among these is the Trinity Chapel, which was founded by Richard Dixton (d. 1438) and William Prelatte (d.1462), both knights under Richard, Duke of York. Here you can view quite a number of funerary brasses collected from other parts of the church by Sir George Gilbert Scott when he was commissioned to remodel the church in the late 19th century. Scott placed these brasses before the altarpiece donated by Queen Anne of Bohemia.

The Trinity Chapel is the largest, but the Lady Chapel has the most elaborate tomb, that of Humfrey Bridges (d.1598) and his wife (d.1620). The recumbent effigies, which were sculpted by local craftsman Samuel Baldwin, lie beneath a fanciful coffered canopy. 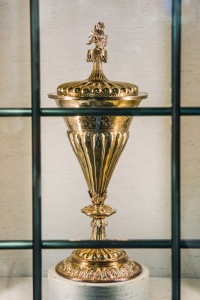 One of the most notable features of the interior - and there are quite a few - is the ornate 15th-century 'wine-glass' pulpit. Many similar pulpits were defaced or destroyed completely during the Reformation period, but not so here. It is probably that the lack of overt religious symbolism on the pulpit caused it to be spared from the Reformer's zealous destruction of icons. ,/p>

In a small recess at the east end of the south aisle is a silver goblet. This is the Anne Boleyn cup, so named because it was given by Queen Anne Boleyn to Dr Richard Masters, physician, in thanks for his care of Anne's daughter, the future Elizabeth I. It was presented by Dr Masters to the church in 1561. The cup is gilt silver.

One of the most elaborately decorated porches in an English parish church, the south porch gives access to the church from the busy market place. It was built around the year 1490 by the abbey, not as a part of the church at all. It was only joined to the church building in the 18th century, long after the abbey had disappeared. Rooms over the archway were used as a business centre for administering abbey affairs. After the abbey was dissolved in the Reformation the rooms served as the town hall. 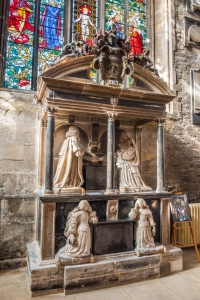 The most interesting place to view St John the Baptist from an architectural standpoint is the south-west corner, just off the market place. Here you can clearly see the line of the flying buttresses stretching in an arc from high on the tower down to the ground.

The function of the flying buttress was simply to support the great weight of the tower walls and transfer the outward thrust of the wall mass to the firm ground below. What is fascinating about this particular case is that you can see how the space between the buttress and the church wall was later filled in with new walling as the church was expanded.

In essence, the later medieval builders took the skeleton of the earlier church and fleshed it out with new walls, making for a greatly expanded interior space, and allowing plenty of light and height in the remodelled building.

The tower itself is of interest; it was built between 1400-1420 with funds donated by King Henry IV as thanks to the citizens of Cirencester for their support during the 1399 rebellion of the Earls. This explains the royal coat of arms on the west door.

A public car park is located a mere hundred yards or so from the north side of the church, making access quite simple. There are information leaflets available for visitors, and some very helpful signposting throughout the church to indicate features of especial interest. 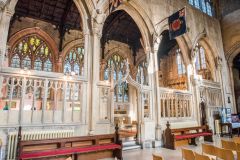 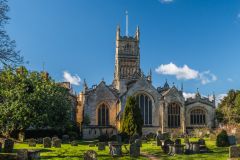 More self catering near Cirencester

More bed and breakfasts near Cirencester