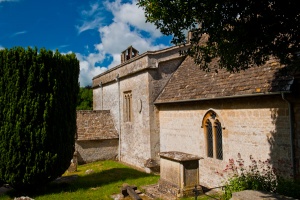 
The little Norman church of St Mary Magdalene, Baunton, houses a treasure in the form of a superb 14th century wall painting that practically dominates the north wall of the small nave.

HISTORY
The church of St Mary Magdalene was built around 1150 by the monks of Cirencester Abbey. The Abbot of Cirencester was also the lord of the manor at Baunton, and the monks cultivated land here. The abbey retained ownership of the Baunton estate until the Dissolution of the Monasteries. 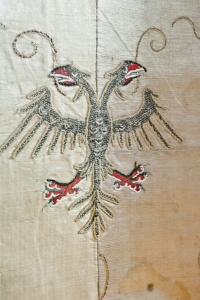 The church has undergone few changes over the centuries and retains much of its Norman character. There is a plain Norman arch leading to a simple chancel, where a 13th-century window was inserted in the north wall.

And it needs to be there, for Baunton, quite unusually, has no east window behind the altar. I'm hard-put to think of another parish church without an east window! The helpful church guide pamphlet suggests there are 5 such churches in Gloucestershire.

A much worn 12th-century piscina stands to the south of the altar. Behind the altar itself is a 15th-century reredos which was originally part of the rood screen. The pulpit dates from the Jacobean period and has several nicely carved panels. There is a plain 16-sided font bowl, dated to the early 16th century, which stands atop the original Norman font base.

MEDIEVAL ALTAR FRONTAL
In a display case on the south wall, opposite the St Christopher wall painting, is a long 15th-century altar frontal, protected in a glass case and covered by curtains to shield the sensitive cloth from the light.

The frontal cloth is complete and original, consisting of alternate panels of yellow and brown damask material. The centre of the cloth shows a Rood, with figures of St John and St Mary made with metal and silk thread.

Stitched into the design is a rebus (a medieval visual pun). This shows an eagle (the symbol of St John), an ass, and a barrel, or tun. Together these symbols represent the name of John As[h]ton, presumably the patron who paid for the creation of the frontal cloth. 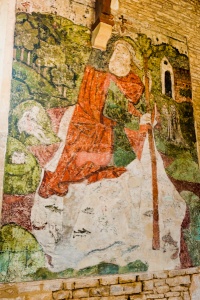 St Christopher was the patron saint of travellers in the medieval period. A figure of the saint carrying the Christ child across a river was often painted opposite the church door, where it would be seen by people entering or leaving the church. A popular belief suggested that if you saw an image of St Christopher you would not die that day.

As is typical in St Christopher figures, the saint is shown facing east, holding a long staff in both hands. He is wearing a red cloak and a tunic of dark green. The Christ child sits, without aid, on the saint's shoulder, carrying an orb.

The really fascinating part of the Baunton St Christopher - apart from its remarkable state of preservation - is the array of symbolic elements in the background. There is a hermit with a lantern, his cell shown as a church. A boy fishing is thought to represent Satan, who is 'fishing' for souls. A mermaid represents Pride, one of the Seven Deadly Sins. In the background is an indistinct windmill, representing Sloth. 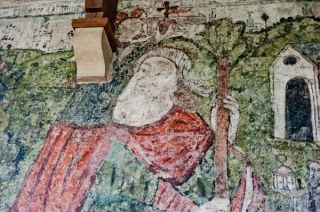 More self catering near Baunton

More bed and breakfasts near Baunton