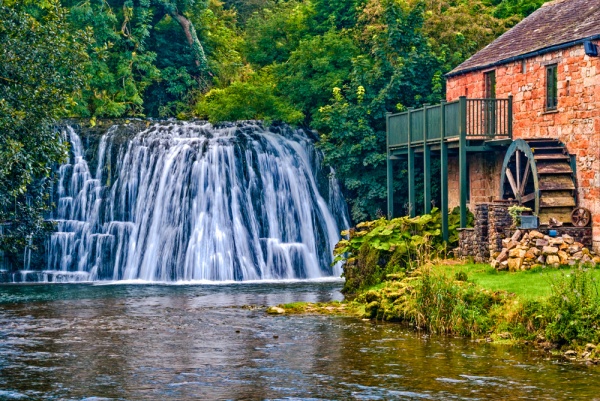 One of the most scenic (and easily accessible) of all Cumbrian waterfalls, Rutter Force is a horseshoe-shaped waterfall on Hoff Beck, near Appleby-in-Westmorland, in the beautiful Eden Valley.

Immediately beside the waterfall is an old mill with a restored waterwheel. The mill is no longer a working mill, but has been converted into holiday accommodation.

The best view of Rutter Force is from a narrow footbridge across the beck, which has been constructed a few feet upstream of a ford for automobiles. The setting is superb, and it is well worth a visit.

The earliest record of the mill at Rutter Force comes from 1579 when the waterfall was used to power the corn mill. The mill continued in operation until the repeal of the Corn Laws of 1832 made milling unprofitable. It was converted to serve as a bobbin mill, and later a sawmill. The waterwheel was taken down in 1940.

In 1991 an artist named Christine Leadbetter bought the old mill and installed a replica waterwheel.

The waterfall played a part in bringing electricity to the area. In 1928 the Great Asby Electric Light and Water Company was formed. The company raised money by offering shares at 5 pounds each. with the proceeds they installed a water turbine at Rutter Force, using the 30-foot fall of water over the falls to produce electric power.

The company installed power lines to the parish church and chapel, local houses and farms, and illuminated the solitary village street. Power from Rutter Force was carried two miles by overhead cables to a barn in Great Asby. Within the barn, the current was used to charge a group of wet acid batteries. A diesel generator was also installed to make up for any shortfall in water supply from the falls.

Electric power from the falls transformed village life, but it was not all plain sailing. The long-distance from the turbine generator to the end-users in Great Asby meant that there was a huge fall-off in power. When one local farmer used a small electric motor to grind animal feed all the lights in the village dimmed.

On the other hand, when heavy rain increased the flow over Rutter Force, there was a power surge and the very real threat that all the electric lights in the village would blow out. Rutter Force was the only source of electricity for Great Asby village until the national grid reached the area in 1952.

Getting to the falls is extremely easy. From Appleby take the B6260 south. After 1/2 mile turn left on the first minor road to the left. After another half mile, the road bears right for Rutter Mill and the waterfall.

If you prefer to arrive under your own power take the Dales High Way footpath from Appleby. The footpath runs directly down Boroughgate, turns onto Colby Lane, then runs south off Colby Lane to follow the course of Hoff Beck south to Rutter Mill. 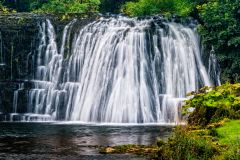 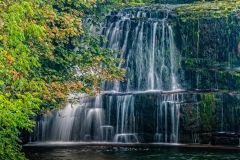 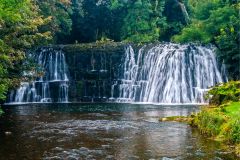 More self catering near Rutter Force >>