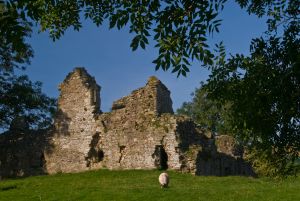 A ruined 12th-century castle standing on a rise above a bend in the River Eden, below Wild Boar Fell in the southern Eden Valley. Pendragon Castle is associated with the legends of King Arthur.

The legend goes that the castle was built by Uther Pendragon, mythical father of King Arthur. Apparently, Uther tried to divert the Eden from its course in order to create a moat around the castle perimeter. However, Uther was unsuccessful, and his efforts gave rise to a local rhyme:

Now, this is where legend and reality have some difficulty getting along: Uther Pendragon, if he ever existed, was a 5th or 6th-century British chieftain, however, Pendragon Castle shows no sign of construction before the Norman period.

As far as we know, the castle was built by Ranulph de Meschines in the early 12th century as a fortified pele, or tower house. It later passed into the ownership of Sir Hugh de Morville, one of the four knights who murdered St Thomas Becket. The 12th-century building was later remodelled with the addition of a garderobe tower in the 14th century.

Pendragon Castle was attacked by Scots on at least two occasions; in 1342 and 1541. After the later attack, the castle fell into disrepair until it passed into the ownership of Lady Anne Clifford. In 1660 Lady Clifford rebuilt the castle and added various outbuildings, including a bakehouse, brewery, and stables. Lady Anne's successors stripped the castle of anything useful and left it to moulder into a picturesque ruin.

The castle is located on private land but is accessible at any time. The location is utterly superb, with wonderful views out over the River Eden below. The walls stand to a good height on four sides, and visitors can access the interior of the keep, which is actually rather small.

The garderobe tower stands to a good height, and you can see the clean-out pits at the base of the tower. The pele tower is about 20 metres square, with walls 2.5 metres thick. It is surrounded by an earthwork ditch crossed by two causeways, much overgrown.

More self catering near Pendragon Castle >>