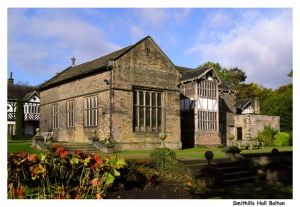 The Radcliffe line of descent died out in 1485 and Smithills passed to the Barton family, who lived here for the next 2 centuries. Then in 1659 the Hall passed through marriage to the wealthy Belasyse family. The Belasyses had numerous manors, and paid little attention to the now old-fashioned Hall at Smithills.

In 1801 the Ainsworth family of Bolton purchased the Hall and gradually rebuilt and restored it. Like so many large houses, Smithills suffered from social upheaval in the early 20th century. The house and estate was simply too large to be run profitably. In 1970 the house was sold to Bolton Council, and for a time parts were used as flats and a day car centre. The medieval part of the Hall was restored and opened as a museum in 1963, and the museum was later extended into the Victorian additions.

Highlights at Smithills include the timber-framed great hall. Beyond the hall are the bower and solar; private chambers for the Radcliffe family. There is a withdrawing room built around 1520, and a 16th century extension built for Robert Barton. Contrast these medieval and Tudor rooms with the Victorian Library, with books selected to show off the owner's education and taste.

One unusual feature at Smithills is a mark on the stone floor at the entrance to the withdrawing room. This mark is said to be the footprint of George Marsh, a local farmer from Bolton who was put to death for his Protestant beliefs in the reign of Mary I.

More self catering near Smithills Hall >>