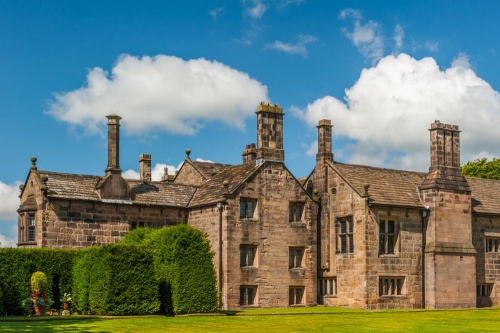 The Hoghton family has been at Hoghton since the 12th century, but the dramatic manor house that you can see today is primarily a product of the mid-Tudor period. The house is built in an elongated figure-8, encompassing two inner courtyards entered through a fiercely castellated gatehouse

The house was completed by Thomas Hoghton in 1565, but Thomas, a Catholic, stayed in it only 4 years before fleeing to the Low Countries, where he died. Thomas' nephew Richard enjoyed rather more politically correct views, and earned the favour of James I, who visited Hoghton in 1617.

Sir Richard, who was hoping to convince the king to relieve him of money-losing alum mines, laid out the red carpet for James' visit - literally. Red carpeting was laid for the entire length of the half-mile avenue leading to the house. 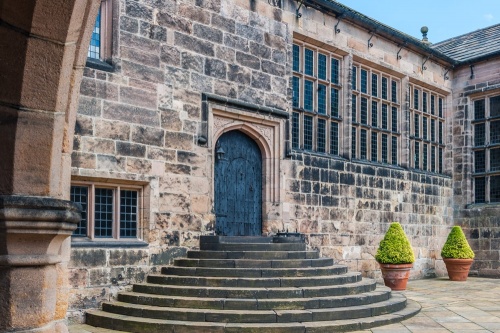 The inner courtyard at Hoghton Tower

The king must have been impressed by the lavish welcome, and the feasting which followed, for he did buy the mines. An amusing but unsubstantiated tale has it that at the feast in the banqueting hall given in James' honour the king was so moved by the excellent loin of beef he was served that he took his sword and knighted it "Sir Loin", giving us the term 'sirloin'. Richard's good fortune did not last long; only a few years later he was imprisoned in Fleet Prison for debt.

Richard's son, Gilbert, fought for Charles I in the Civil War, though Gilbert's own son (named Richard, like his grandfather), chose the Roundhead cause, and Hoghton Tower was besieged by Parliamentary troops in 1643. Eventually the defenders capitulated, but when the Roundheads entered the house the powder magazine in the tower between the two courtyards exploded with terrifying force, killing over 100 Parliamentary men. The tower was never rebuilt. 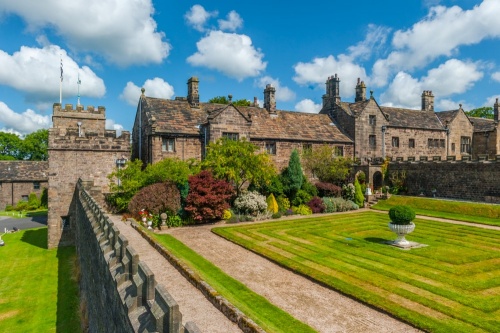 The house and formal gardens

Following in Richard Hoghton's footsteps, succeeding generations of Houghtons were fervent Presbyterian Dissenters, and the banqueting hall was often used as a Dissenting chapel (quite a change from the gaiety of entertaining the royal court).

Later generations of Hoghtons took a strong interest in parish affairs and moved away from Hoghton Tower to be closer to the political action. Without them, the house fell into disuse, and when Charles Dickens visited it in 1854 he found it in a depressing state of disrepair. The mood of the place did prompt Dickens to write a story "George Silverman's Explanation", in which the house features prominently.

Hoghton Tower was not restored until 1870, after a century of neglect. Despite the loss of many family portraits and collectables in a fire, the work was finished in 1901, and visitors today can see several attractive rooms in a guided tour that lasts about 40 minutes. Highlights include excellent Queen Anne panelling, the galleried banqueting hall, good period furniture, and a dollhouse collection. You may also delve into a Tudor well house.

More self catering near Hoghton Tower