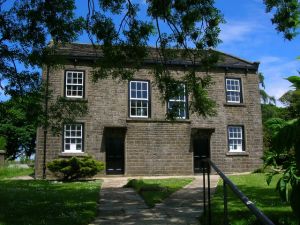 Goodshaw Chapel
A Baptist chapel dating from 1760, Goodshaw Chapel is the only Nonconformist place of worship in the care of English Heritage. It was expanded in the 19th century and restored to its original condition in 1984. It is composed of two storeys and is laid out on a three-bay plan.

Though the chapel looks quite plain on the outside, the interior has lovely cream and brown box pews and first-floor galleries.

The plain exterior was intentional; non-conformist chapels were often much plainer than traditional Anglican churches to emphasise the differences in religious worship. But there was another, more practical reason; chapels were usually built by the congregation themselves, using whatever local materials they could find.

Lancashire was a hotbed of non-conformist worship in the 18th century. We know that there was a Baptist congregation meeting at Lumb, to the east of Goodshaw, as early as 1742. The Baptist group joined with local Wesleyans and the combined congregation began to build a place of worship at Goodshaw in 1760.

They chose a location easily accessible to nearby farms, beside the main road to Burnley. In 1760 this would have been an isolated location, but now the chapel stands near a modern housing estate.

Expanding population due to the growing textile industry meant that the original chapel had to be enlarged at the turn of the 19th century.

In 1864 a new chapel was built nearby and Goodshaw Chapel was used less and less. By the middle of the 20th century, it had fallen completely out of use and was in danger of becoming derelict. It was restored by English Heritage and taken into state care from 1975.

The thing that makes Goodshaw so striking is that the interiors have been almost completely unchanged since the early 19th century. The box pews date to the early 19th century, but the side galleries are original. Look for a large pew on the south side used by the choir. The beautifully carved pulpit is early 19th-century and retains its sounding board.

It is worthwhile exploring the burial ground, which boasts some very good examples of early 19th-century gravestones.

The chapel still holds a festival service on the first Sunday in July.

More self catering near Goodshaw Chapel >>