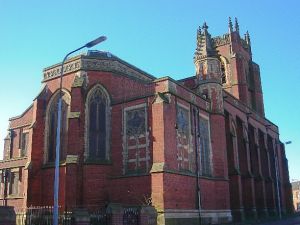 Bolton, All Souls Church
All Souls church in Bolton was begun in 1878, at a time when the population of the area was expanding at an enormous rate due to industrialization. The benefactors of the new church were local mill owners Thomas and Nathaniel Greenhaigh, who owned a highly successful cotton mill at Halliwell. The Greenhaighs held very strong evangelical beliefs and were very concerned for the spiritual welfare of their workers.

When Nathaniel died in 1877 he left his fortune to Thomas, who used the money to fund a new church and a school. Greenhaigh called in architects Edward Paley and Hubert Austin to create a Victorian Gothic church on a grand scale.

Paley and Austin designed a fantastic building of red brick, dressed with stone, composed of an aisless hall and small rounded apse, with a striking west tower that dominates the surrounding houses. The interior is original and features some very nicely carved oak fittings.

The Greenhaigh brothers wanted everyone to have a clear view of the chancel, so they could see and hear the vicar. To meet this requirement the architects had to design an interior that was one of the widest unsupported spans in the country at that time, measuring 16 metres across. They created an impressive king-post timber roof to carry the span. The patrons also required pews to be freely available for all, unlike common practice at the time.

The interior features a stone reredos, nicely carved oak choir stalls, and a large east window depicting scenes from the New Testament. On the north side of the nave is an alabaster wall tablet to Thomas Greenhaigh, commemorating the fact that when he died he left money to pay for coal and clothing for the poor of the parish, plus the insurance, and repair to the church and school. One amusing bequest was £350 to pay for hats for the children singing in an annual sermon.

All Souls has recently been the recipient of a Heritage Fund grant which aims to transform the church interior into a multi-purpose community centre. This grand Victorian church is a reminder of Bolton's industrial past. It is now in the care of the Churches Conservation Trust. For further information see the CCT website or the All Souls Crompton Community Centre website.

More self catering near Bolton, All Souls Church >>

More bed and breakfasts near Bolton, All Souls Church >> Welcome to the White Hart Inn at Lydgate a family run Inn with Rooms set within the village of Saddleworth on the edge of the moors.