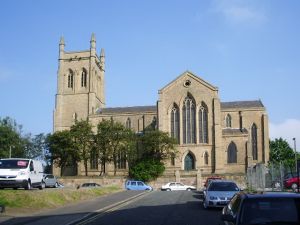 Blackburn, Holy Trinity Church
Holy Trinity is a Gothic Revival church built in 1837 in a green setting on Mount Pleasant, surrounded by nearby blocks of flats. The church has a three-stage west tower and very large transepts north and south.

Unlike many Revival churches, Holy Trinity is not lushly decorated; indeed, the interior is restrained, even spartan in style, lit by tall, narrow lancet windows. The most interesting feature is the timber roof, which is ornamented with heraldic paintings of angels.

There are 80 of these painted angels, each bearing a shield commemorating a local family who contributed money to make the church construction possible. At the crossing is a royal coat of arms to Queen Victoria. Other heraldic shields bear the arms of previous English kings and queens going back to the time of Edward the Confessor.

The church was built by public subscription and was begun in January 1836. The total cost was 5019 pounds, of which 1519 pounds was a grant from the Church Building Society. The architect was Edmund Sharpe of Lancaster, cousin of Blackburn's vicar, Revd. John Sumner, who also served as Bishop of Chester. A later vicar was Chad Vane, who founded The Samaritans charity. All Saints is considered Sharpe's best work, a tour-de-force of Gothic Revival style.

Building delays meant that the church was not completed and opened to worship until July of 1846. The tower was not finished until 1855. In fact, you could say it is still unfinished, for the building plans called for a spire, which is yet to be built.

In 1860 the interior was altered by Sharpe's architectural partner EG Paley, who rebuilt the galleries and added new stalls.

The church was declared redundant due to a falling number of worshippers in 1981 and in 1984 it passed into the care of the Churches Conservation Trust. Access is by appointment only - see the Trust website for current details. 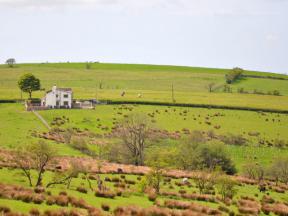 Situated within easy walking distance of the village of Mellor this delightful cottage is perfectly placed to visit some of the most well-known places in Lancashire. Mellor itself is offers …
Sleeps 4