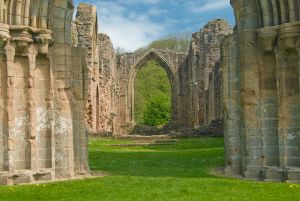 A lovely 12th-century Augustinian Abbey in a peaceful rural setting. The abbey was founded by Richard de Belmeis in 1143 at Lizard, but it moved to Donnington the following year and to Lilleshall in 1148. The main buildings were constructed in the 12th and 13th centuries. These include the abbey church, sacristy, chapter house, warming room, kitchen, and refectory.

To these were added the abbot's hall and parlour in the 14th century. Lilleshall gained great prestige, but was never terribly large or wealthy; at the time of the Dissolution, there were 11 canons in addition to the abbot.

The abbey was dissolved by Henry VIII in 1538 and sold to Sir Richard Leveson, who established his family home here by converting parts of the abbey into a residence. The residence was fortified by the Royalist Leveson family during the Civil War and had to withstand an attack by Parliamentary troops in 1645. The house was badly damaged in the attack and was never fully repaired.

The best of the abbey ruins are centred around the church, particularly the lovely Norman processional doorway, ornamented with beautiful Transitional carvings. The church is quite unusually complete; so complete, in fact, that visitors can ascend a stair to the gallery level and thus obtain wonderful views over the church and cloistral buildings.

Another notable feature is the slype, a narrow, vaulted passage which may have been used as a parlour. The slype has wonderful rib vaulting and gives access to the monk's cemetery.

More self catering near Lilleshall Abbey >>