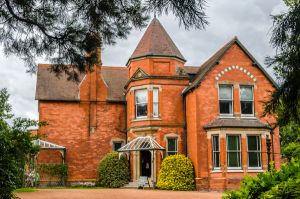 More than just a house, Sunnycroft is like a mini-estate, with a kitchen garden, pigstyes, orchards, and stables. The house is approached via a lovely avenue of lime and redwood trees. There are 5 acres of gardens, within which is a Grade II listed conservatory, dating to 1899, which houses a rockery and fernery.

There are guided tours of the house interior with National Trust volunteer guides, who will explain the history of the house and the people who lived here - among them a royal embroiderer and a brewer.

One of the families that lived at Sunnyside were the Landers, and they seem to have been packrats, never throwing anything away. One of the prize displays at Sunnyside is the Landers' medicine cabinet, originally used as a linen press. This is filled with over 300 bottles of toiletry items, medicines and odd remedies.

The first thing you notice about Sunnycroft is not the house, but the long line of tall wellingtonia trees that line the curving drive, like tall green sentinels. To one side of the drive are the kitchen gardens, and beside them, the tables. Inside the stables is a small garage with a beautifully preserved 1955 Daimler Regency Mk II automobile. Only 344 of these cars were made, and just 15 still exist. 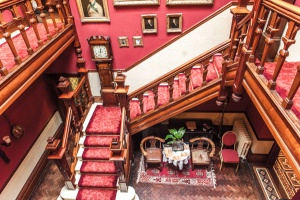 Admission to the house is by timed admission. When we visited we had to wait about 45 minutes to gain admission, but that gave us ample time to explore the gardens, conservatories, and stables.

When we were admitted to the house a guide brought us into the billiard room for a brief talk on the history of the house and a look at some of its owners, particularly the Lander family.

Then we were free to wander about the house at our own pace. There were volunteer stewards in most rooms and very good information sheets throughout.

By far the most impressive room in the house was the staircase hall, carpeted in lush red, with wonderfully carved staircase newels and bannisters rising up to a glassed cupola high above. This has got to be one of the most impressive Victorian rooms I've seen in a small English house. Other highlights include gorgeous light fittings throughout the house, some in rococo style.

The house was fitted with an early form of central heating, with extravagantly ornate radiators in most rooms. Everywhere we looked we saw luxurious fittings, from Art Deco door handles to painted friezes. The Landers spared little expense in creating an impressive and opulent home.

Yet, for all that, one gets the impression that life at Sunnycroft was not one of idleness. The information sheets had vivid recollections of the Lander children, recalling, among other things, hours spent gathering eggs for market and making preserves with produce from the kitchen garden.

Sunnycroft is not a stately home; it is a slice of late Victorian life, a look into the comfortable world of a well-to-do Midlands family, and an absolute delight to visit. 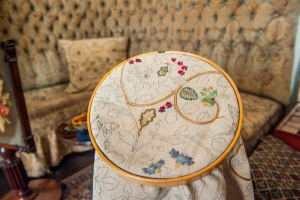 Embroidery in the withdrawing room 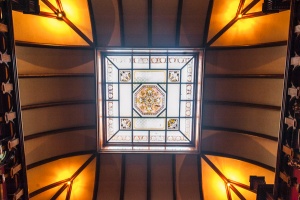 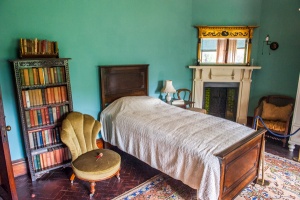 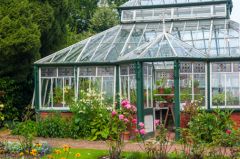 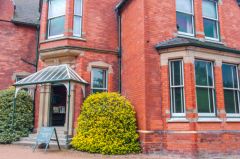 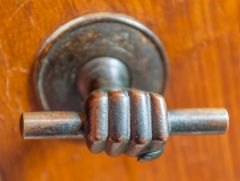 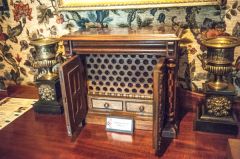 More self catering near Sunnycroft >>

More bed and breakfasts near Sunnycroft >>