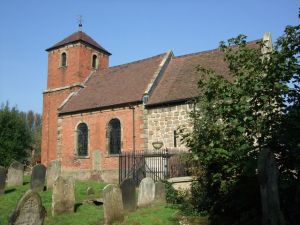 Stirchley, St James Church
It is hard to believe that this quiet little church is only a mile or so from the busy centre of Telford. St James dates to the Norman period and retains several Norman features.

The 12th-century chancel is built of stone, but the 18th-century nave and west tower are made of brick. The interior furnishings are mostly Georgian, with a range of box pews a west gallery, and a nicely carved pulpit.

Surrounding the church are the partial remains of a large polygonal churchyard, now largely buried, but the boundaries are laid out with hedges and stone walls.

St James' is no longer used for regular worship and is in the care of the Churches Conservation Trust.