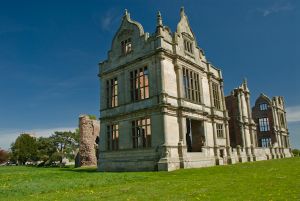 Moreton Corbet Castle encompasses the remains of a 12th-century moated castle and the exquisite shell of an Elizabethan mansion built to replace the medieval castle. The first castle was constructed as an earthwork enclosure with a moat, and a keep in the north-west of the enclosure. The castle is attributed to a nobleman by the name of Bartholomew Torret.

In the early 13th century the estate passed by marriage to the Corbet family of Wattlesborough. The Corbet's rebuilt the early Norman fortress as a part-fortified stone residence surrounded by a curtain wall which was entered by way of an impressive gatehouse. The fortifications must have been mainly for show, as they could never have withstood a serious attack.

Sometime around 1560 Sir Andrew Corbet rebuilt the castle and built a new east range with a great hall. To this was added an ornate south range designed in an L-shape by Sir Andrew's son, Robert Corbet. It is this latter addition that stands as one of the landmarks in English architectural history.

Corbet was influenced in his work by Italian design, but at that time few people travelled to Italy, so the design was accomplished solely with the aide of drawings of Italian villas. Thus, the classical Italian effect of Moreton Corbet is made up of random bits and pieces rather than a coherent whole, but it is still a lovely building, though it stands today as an empty shell.

To understand why it is a shell, we must fast-forward a few decades, and hear the story of a curse that seems to have stood the test of time. In the early years of the 17th century, Puritans were persecuted in England.

The owner of Moreton Corbet Castle, Sir Vincent Corbet, was himself not a Puritan, but he did sympathize with their plight, so he gave shelter to a Puritan neighbour named Paul Holmyard. However, Corbet became dismayed by the radical Puritan ideals (and perhaps concerned for his own welfare should his aide be discovered) so he asked Holmyard to leave.

Holmyard, in the best style of traditional folk tales, cursed the Corbet family and vowed that work on the house would never be completed. Holmyard's ghost is said to haunt the area, keeping watch to ensure that his curse is fulfiled.

Whether it was the effect of the curse or the events that followed, the Italianate mansion was indeed never completed.

In the Civil War, Sir Vincent fortified the house on behalf of the king. Corbet had a force of over 100 men at his disposal, but he was undone when a small force of only 10 Parliamentarians tricked him into opening the gates one night, and Corbet had to surrender.

The castle was burned by the Parliamentary soldiers, and though it was repaired, it was never completed, and eventually fell into decay, leaving it much as we see it today; a romantic shell of a building.

Immediately beside the castle is the parish church of St Bartholomew, which boasts wonderful memorials to members of the Corbet family. Do take the time to visit the church, as the memorials are quite beautiful and well worth a visit.