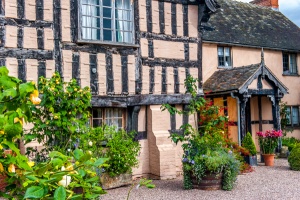 The Old Hall at Wollerton stands in a lovely rural location in a quiet village in north-eastern Shropshire, not far from Market Drayton. The Grade II-listed timber-framed hall was built in the 16th century, and is not open to the public, but it does form a lovely backdrop for these beautiful gardens.

In 1984 John and Lesley Jenkins began developing the garden around the old hall house in a style vaguely reminiscent of Arts and Crafts, with distinct garden 'rooms' and colour schemes. Lesley had grown up in the hall, but her parents sold it when she was in her teens. Years later she and her husband John purchased the house and she was able to put some of her gardening ideas into practice.

This divided the loosely rectangular garden shape into a series of distinct areas, which invited unique styles. The result is a garden described as 'controlled exuberance', based around profuse plantings of perennials. 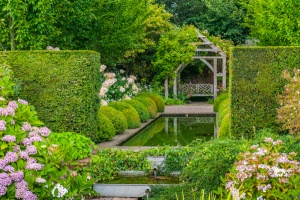 The gardens at Wollerton have been awarded the highest accolade from the Good Gardens Guide, and when you visit it is easy to see why it was rated so highly. Here are just a few of the distinct garden areas to enjoy:

Divided in two halves, lower and upper, this area features a narrow canal flanked by terracotta pots, planted with white tulips in Spring and Hydrangea the rest of the year. The result is similar to a Dutch water garden on a small scale.

Leading away from the timber-framed hall is this lovely walkway between rows of Portuguese laurel trees. Though it is called the Old Garden, it is actually the newest garden space - as the three previous gardens on this spot failed due to box disease.

Entered by rustic Arts and Crafts style gates, this lovely area is flanked by twin borders planted with phlox, delphiniums, hollyhocks and early dahlias in summer and with masses of asters in September. 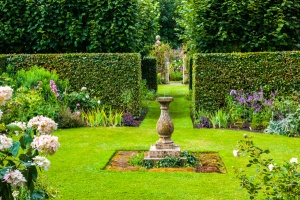 The Rose and Sundial Garden

This narrow path crosses from the top to the bottom of the garden and is bordered by box backed by yew hedges. The sides of the walk are lined with clematis, phlox, and a profusion of dahlias.

Centred around a carved limestone wellhead, with four quadrants divided into a cruciform shape by tall yews.

A quiet space, deliberately underplanted to create a sense of space, with wildflowers flanking a central area, with a medieval font acting as a focal point. The font serves to remind visitors of the ancient origins of Wollerton, even if the garden is a relatively new creation.

Created as an act of homage to the National Trust garden at Lanhydrock in Cornwall, this colourful space is a riot of 'hot' colours in summer, with reds, oranges, and yellows predominate. Its a real 'wow!' space to enter.

This is just a taster, a brief overview of what ranks as one of my favourite English gardens to visit. Perhaps it was the fact that we came on such a lovely summer's day. Perhaps it was the combination of the attractive timber-framed hall, which set off the more modern gardens so beautifully. Whatever the reason, Wollerton Old Hall ranks as one of the most enjoyable small gardens I've had the pleasure of visiting anywhere in Britain. 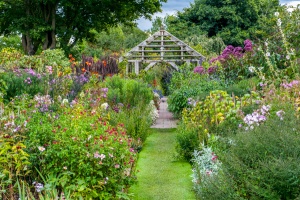 The colourful Rose and Sundial Garden 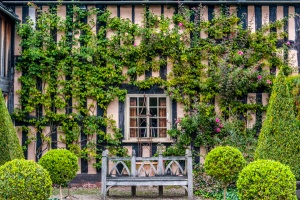 Topiary behind the 16th century hall 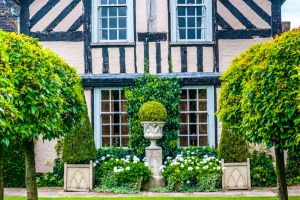 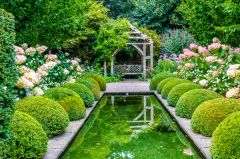 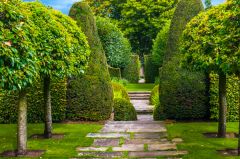