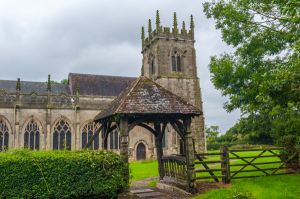 On 21 July 1403, the Battle of Shrewsbury took place in this quiet countryside setting, between forces under Henry IV and an army led by the Percy's, Earls of Northumberland, including supporters of the recently ousted king, Richard II.

An effigy of the victorious Henry IV is set into the exterior of the east wall. The arms of the knights who fought with Henry are carved upon the roof beams. St Mary's thus serves as a fascinating historical record of the battle - at least as far as the victors are concerned!

Though the church is early 15th century, much of what we see inside is from a major restoration led by S Pountney Smith in the 1860s. Smith salvaged the original layout, the tower and exterior walls, but the remainder, including the fittings, are largely Victorian. 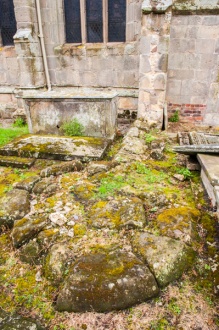 Ruins of spiral stair from
the medieval college

Perhaps the best interior feature is a 15th-century Piet, brought here from another church. The Piet (or pieta) is beautifully carved in oak and depicts a sorrowing Mary holding the body of Christ following the Crucifixion.

St Mary's is no longer used for regular worship and is in the care of the Churches Conservation Trust. The key can be borrowed from the Shrewsbury 1403 visitor centre, about a five-minute walk away. The easiest way to visit is to park at the visitor centre, where there is also a very good free exhibit about the battle.

The traditional story behind the building of Battlefield church is that it was erected by Henry IV in thanks for his victory. This story has no basis in fact. The real story is that a local rector named Roger Ive, perhaps appalled by the slaughter of the battle, asked a local landowner named Richard Hussey to obtain a royal license for a chapel.

This Hussey did, and granted two acres of land on which to build the chapel, where daily prayers could be said for the souls of those who had perished in the fight. The chapel was finished in 1409, a year before Henry IV granted a foundation charter and privileges to the chantry chaplains, ensuring an income to maintain the chapel.

The chapel and the chaplains who served it became Battlefield College. The college consisted of six small rooms for chaplains, and the church they served. Sometime later it seems that an almshouse and school were added. The west tower was added to the chapel in the late 15th century, but the chapel itself was abolished along with similar chantries in Henry VIII's Reformation.

All the college buildings except the church were pulled down, and even the church was allowed to crumble into decay. The roof collapsed, and a new wall built to enclose a much smaller space; roughly where the rood screen is today. It was not until the 1860s that Battlefield church was restored, under the patronage of Lady Brinckman, one of the Corbet family who then owned the estate.

The church became redundant in 1982 but has since been taken into care by the Churches Conservation Trust. 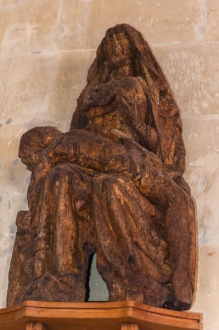 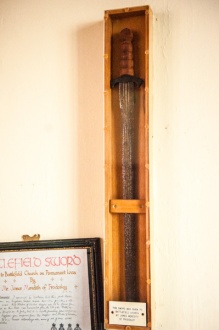 A sword from the battle site 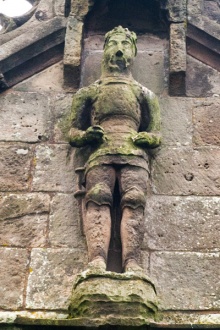 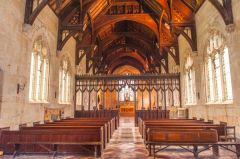 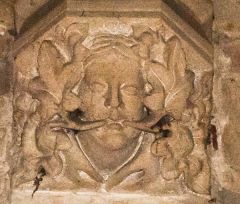