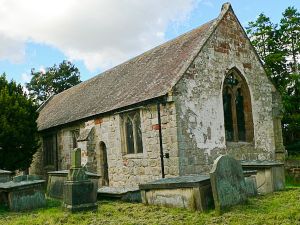 Preston Gubbals, St Martin's Church
St Martin's has had a chequered past. It was built as a chapel of ease in the 12th century but later became a full-fledged parish church. Portions of the medieval church were demolished, leaving the chancel, which became the south aisle of a new church in 1866.

In 1973 that Victorian church was pulled down, leaving the medieval aisle still standing. What remains is a very simple single-cell building, with no tower or porch. The 19th-century arcade was blocked, and now forms the north wall of the remaining building. An 18th-century bell from Preston Gubbals is now installed in St Alkmund's Church in Shrewsbury.

The church is exceptionally simple. The nave and chancel merge to form a single-celled building made of sandstone, under a tile roof. In the south wall is a 12th-century priest's door.

The interior is largely a product of the 1866 restoration, with fittings carved by Rev ED Poole. the vicar at that time. One feature that is not Victorian, however, is a 16th-century font. There is also a 17th-century parish chest. Set on the east wall are a pair of benefactor's boards detailing gifts to the church.

The best feature of St Martin's is a beautifully preserved 14th-century grave slab and effigy above a foliated cross. There is a large rose window at the west end, dating from the Victorian restoration. The foundations of the Victorian west tower still stand to a good height.

Look for the memorial to Flora Kelly (d. 1900), the missionary wife of a former rector, who died in the Boxer Rebellion in China. In the south wall is a stained glass window in memory of Lance Corporal William Williams of the Welsh Guards, who was killed in action in WWI.

In the churchyard is a sundial created during the 17th century, using the base of a medieval churchyard cross. The original medieval cross shaft has been replaced with a 17th-century baluster with a moulded top. At the base is a sundial plate made of copper and inscribed with '1638/WG'.