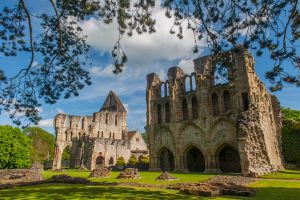 One of the most historic monastic sites in England, Wenlock Priory was founded in the year AD 680 by the King of Mercia, Merewalh, for his daughter Milburga, who served as abbess until her death in 722. It was initially a double house, with quarters for nuns and monks.

It is possible that Milburga's 7th-century church lay beneath the later monastic church, but it may alternatively have stood a few hundred yards away, where the medieval parish church of Holy Trinity now stands.

Milburga was acclaimed a saint after her death.

Her abbey was destroyed around 874 by the Danes and lay derelict until it was refounded as a Minster by Leofric, Earl of Mercia around 1050. Once again we are uncertain where Leofric's minster church stood, but it seems that part of the late Saxon building is incorporated into the fabric of Holy Trinity.

Shortly after the Norman Conquest the Minster was once again refounded, this time as a Cluniac priory, with monks drawn from La-Charite-sur-Loire in France. The founder was Earl Roger de Montgomery, one of the new Norman lords whose estates took in vast swaths of land near the Welsh border.

The new monastery was dedicated to St Milburga and in 1101 the remains of St Milburga were (conveniently) rediscovered. As a result, Wenlock Priory became a popular destination for pilgrims in the medieval period and the priory prospered.

That prosperity is perhaps best evidenced by the superb 13th-century church, which was accounted one of the finest in England before the priory was dissolved by Henry VIII in 1540. In 1102 Wenlock became a royal priory, and throughout the medieval period it hosted several monarchs.

Though the priory flourished, it was still nominally 'French', and it was not until 1376 that the first English prior was appointed. Finally in 1494 Wenlock severed ties with Cluny. This step to full independence was the initiative of Prior Richard Singer (1486-1521) who also erected the superb prior's lodging south-east of the church.

Prior Singer's lodging house, with its associated infirmary and chapel, forms part of the post_dissolution private house, which forms one side of the priory site today. The cloisters are now a lovely garden filled with topiary. 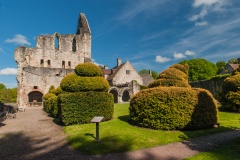 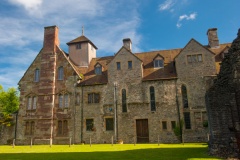 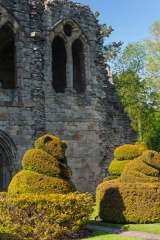 Topiary in the cloisters

The finest feature of Wenlock Priory is probably the superb chapter house, which dates to about 1140. The Anglo-Norman decoration is beautiful, with blind arcading and carved columns. 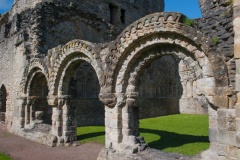 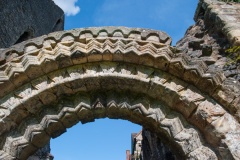 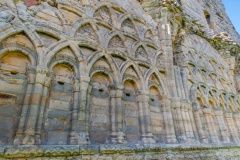 Blind arcading in the chapter house 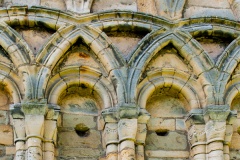 An unusual feature is the 'lavabo', or lavatorium, a sort of communal washing fountain, built in the middle of the 12th century. The lavabo stands in the cloister garth and was originally housed in an octagonal building. The ornately decorated fountain has spaces for up to 16 monks at a time to wash before proceeding to the refectory for meals. Look for the carved panels around the base of the structure. 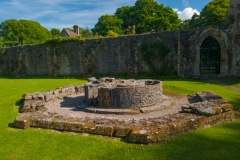 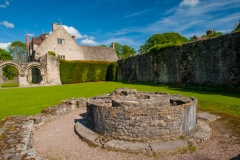 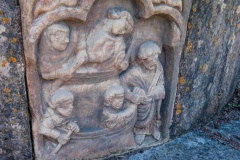 Carved panel on the lavabo base 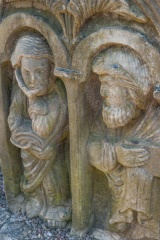 Figures of saints on the base 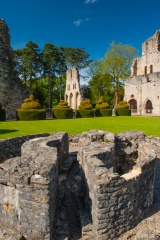 Looking towards the church

Excavations have shown that there was a Roman building on the site which was reused as the 7th century-church. This Roman/Saxon church was still standing in the 11th century.

We came to Much Wenlock late on a wonderfully sunny summer afternoon, when the warm sunlight lit the ruined walls with a golden glow, and long shadows started to creep across the ruins. It was truly magical. The walls stand to a remarkable height in places, and the carving detail is fabulous in places. The cloister area is striking, with topiary mixed in amongst the medieval ruins. After we finished exploring the ruins we took the time to explore the town itself.

If you have the time I highly recommend walking around Much Wenlock. There are a wealth of historic buildings, including the medieval Guildhall and the very interesting medieval church. We loved it! 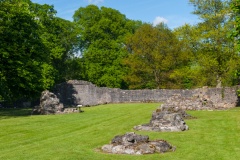 Inside the abbey church ruins 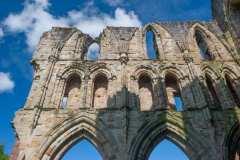 The triforium and clerestory arches 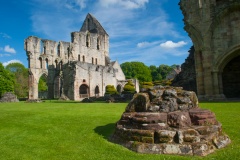 A ruined column base in the church 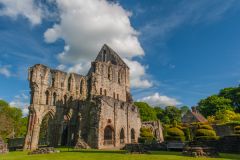 More self catering near Wenlock Priory >> 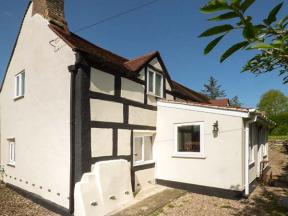 This cosy and charming cottage is located in the town of Much Wenlock in Shropshire and can sleep up to six people in three bedrooms.
Sleeps 6 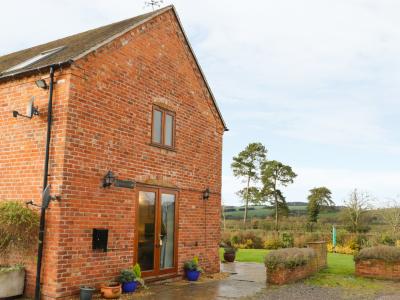 An attached barn conversion situated near the town of Much Wenlock in Shropshire, it can sleep four people in two bedrooms.
Sleeps 4