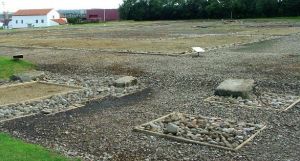 Segedunum Roman Fort (Hadrian's Wall)
The partial remains of a Roman fort established at the eastern terminus of Hadrian's Wall. Segedunum features a viewing tower which gives good views over a site which includes a reconstructed bathhouse and a section of the original Wall.

Segedunum was constructed around AD 125 and covered an area of 1.5 hectares. The original fort contained officer's quarters, a hospital, stables, barracks, and a granary.

Sometime around 180, the fort was expanded to include water tanks and a bath attached to the commander's quarters. Much later, in the 3rd century, further industrial buildings were added, and other buildings converted for housing. The fort was occupied until the end of the Roman period in Britain at the beginning of the 5th century.

In the 20th century, the east gate of Segedunum fort was carefully removed and rebuilt in Wallsend Park.