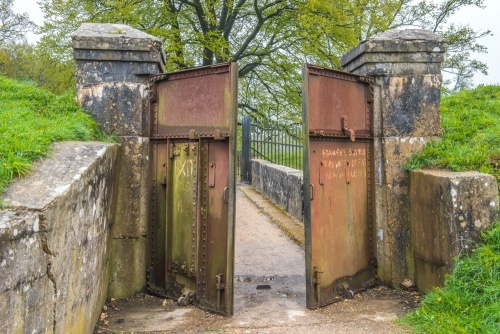 Reigate Fort is a Victorian-era fort on top of Reigate Hill. The Fort offers wonderful views over the Weald. It was built in 1898 as part of an effort to defend the approaches to London from the perceived threat of a French invasion.

Reigate Fort was intended as a 'Mobilisation Centre' to gather troops and supplies for the defence of the North Downs, rather than a regular defensive structure. It was one of 13 similar forts built as part of the London Defence Scheme, a line of forts stretching 72 miles and meant to slow a French advance on London.

Despite the very real fear of an imminent French invasion, most of the London Defence Scheme forts were manned by volunteers, with two cottages for Fort Keepers just outside the fort walls.

Among the military buildings on show are the Tool Store, where tools used in trench warfare were stored. Here you would find shovels, pickaxes, barbed wire, saws, and axes, as well as ammunition. If an invasion was launched, the garrison would have collected the tools and dug pre-planned trenches linking the 13 mobilisation centres. 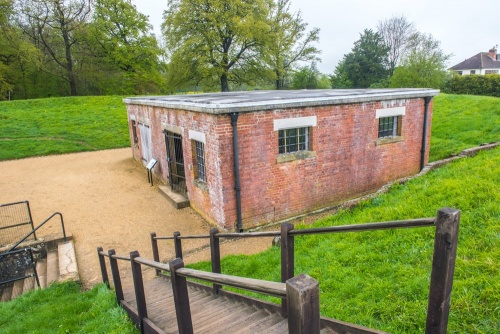 Saws and axes would have been used to clear trees from the area around the trenches to give troops an unhindered view of an enemy approaching. The military plan predicted that the trenches could be dug in an astonishing four days, using some 25,500 labourers to dig trenches designed by the Royal Engineers.

The Magazine held artillery and small arms ammunition in two chambers; a cartridge store and a shell store, linked by a single passage. It was vital to keep humidity and temperature levels stable, so the Magazine was well ventilated and ammunition was stored in wooden boxes so it could breathe.

Light was provided by candles, kept in glazed recesses to prevent sparks igniting the volatile ammunition. Workers had to change into spark-free cotton clothing before going near the ammunition storage chambers.

The final structures at Reigate Fort are a pair of underground Casemates, which also stored trench warfare tools and were probably intended for use as war rooms for coordinating defensive efforts. The casemates are built into the high earthwork ramparts that surround the fort. The earthworks offered protection from enemy fire. The casemate windows are covered with elaborate iron grills decorated with a rose pattern. Why make these windows, half-hidden underground, so elaborately decorated? 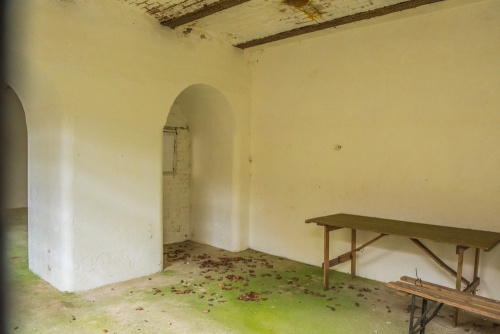 No sooner had the London Defence Scheme Forts been built than their necessity was questioned. Why build forts, went the new line of thinking, when a far better solution would be to not let the enemy land on British soil, to begin with? This 'rethink' prompted the government to put money into building up the British navy.

By 1907 the threat of an invasion from France had gone, and the fort was sold into private hands. Luckily, the Victorian defences were not destroyed, so that today's visitor can get a good idea of what the fort looked like when it was operational.

During World War Two, the South Eastern Command was based at Reigate, using a network of tunnels dug deep into Reigate Hill. The Command, which was headed by Lt General Montgomery, also occupied houses in neighbouring Underhill Park Road and Beech Road.

The Fort is usually open daily to visitors, but there are also regular guided tours show what life was like for the soldiers stationed here. 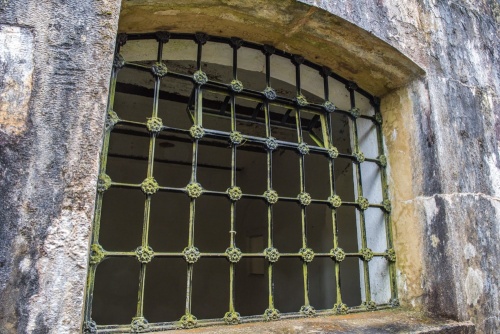 The fort is just one feature on a Military Walk, signposted from the National Trust parking area on the top of Reigate Hill. The Military Walk follows the course of the North Downs Way National Trail.

Immediately on leaving the car park, you cross a footbridge, built in 1910. According to an information panel erected by the surrey Count Council, the bridge is the earliest example of a reinforced concrete footbridge in Britain. It weighs 50 tons and has an unbroken span of 97 feet. It was restored to commemorate Queen Elizabeth's Diamond Jubilee in 2012.

Reigate Fort is the second stop on the Military Walk. Beyond it is a large clearing on the south-facing slope of the hill. This innocuous open space has a tragic history.

Tragedy struck in 1945 when a US B-17G (popularly known as the Flying Fortress) crashed on Reigate Hill, killing all nine crew members. The aircraft destroyed a stand of beech trees as it crashed, creating a large clearing that you can still see today.

The disaster is commemorated by a pair of oak sculptures, one on each side of the clearing, representing the B-17's wingtips. The two wingtip sculptures are placed exactly the distance apart that the real ones were on that fatal day.

The crew were drawn from the US Army Air Corp's 384th Bombardment Group and were flying back to their base at Grafton Underwood in Northamptonshire after a bombing mission to Plauen on the Czech/German border. The oldest member of the crew was 25, while the Waist Gunner, Thomas Hickey, had received the Distinguished Flying Cross. 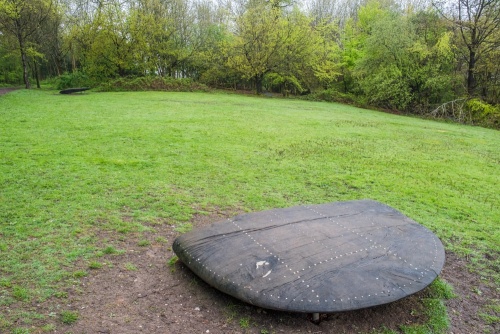 A very short distance beyond the crash site, and also on the left (south) of the path, is a peculiar structure thought to have been erected as part of the South Eastern Command's headquarters. No one knows what the low structure was used for. It has large, domestic-style windows on the south but very low entrances on the north and south.

Even military experts are baffled as to the building's original purpose. it likely played some kind of communications role, and a ceramic-lined hole in the roof may be a socket for a radio mast.

If you continue on past the WWII structure you reach Colley Hill. There you can see depressions in the ground made when the hill was used by the military for firing practice during WWII training exercises.

It is well worth extending your visit beyond the Fort to take in the rest of the Military Walk. The B-17 crash site is extremely moving. It is hard to imagine such a peaceful location having such a tragic history. 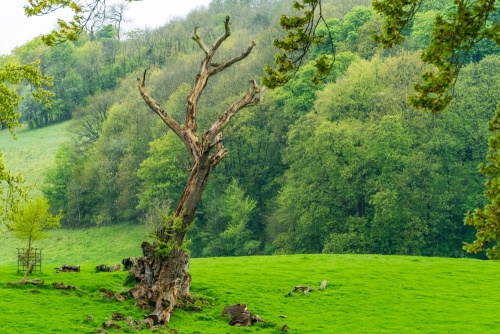 If you leave the National Trust parking area atop Reigate Hill and walk east across Wray Lane, away from the fort, you will come to the historic parkland of Gatton Park. This 18th-century parkland was laid out by Lancelot 'Capability' Brown for Sir George Colebrooke between 1762 and 1768.

Part of the estate is owned by the National Trust, and you can follow a wonderful circular walk through the parkland. There is a leaflet with a walking route, available from the National Trust information centre in the car park. We've taken the walk and it was extremely enjoyable and took us about 90 minutes.

Reigate Fort car park is on Wray Lane, at the top of Reigate Hill. The car park is almost directly beside junction 8 of the M25 and is very easy to reach. Note that there is no direct connection to Wray Lane from the Reigate direction. 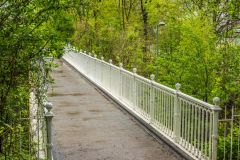 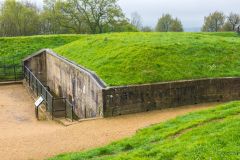 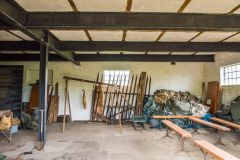 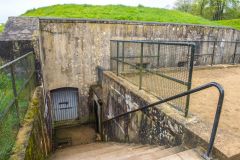 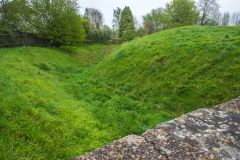 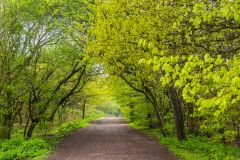 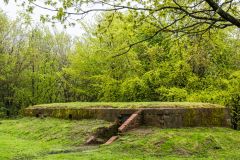 More self catering near Reigate Fort >>