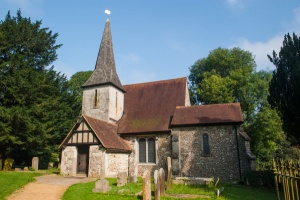 The tiny Norman church of St Peter and St Paul stands almost forgotten down a quiet country lane, looking out onto farm fields, on the western fringe of Chaldon, only a mile inside the M25 ring road.

Yet within this small building is one of the finest early medieval treasures in England, a wall painting created at the turn of the 13th century, depicting the Last Judgement and taking up almost the entire west wall of the nave. This is the earliest known wall painting in the country and probably dates to 1200AD.

The earliest church at Chaldon was recorded in a charter dated AD 727 and was associated with the Abbey of Chertsey. The timber structure may have been built as early as AD 675. The current church was built in the late 10th or early 11th century, with a simple rectangular nave and the high walls characteristic of Saxon architecture.

Of that Saxon building, the west wall is original, and the wall pierced by the chancel arch may be as well. There was certainly a church here at the time of the Domesday Book, which mentions 'Chalvedune' possessing 200 acres of land and a church. The church remained connected with Chertsey Abbey until the Dissolution of the Monasteries under Henry VIII.

In the early 13th century a south aisle was added to the Saxon structure, inserting Early English arches into the Saxon nave wall. The chancel arch was inserted at roughly the same time, with a similar north aisle added 50 years later. 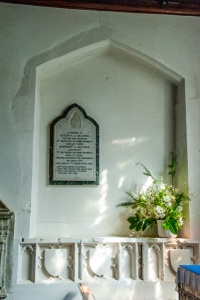 The major feature in the chancel is a large Easter Sepulchre, dating to the 15th century and taking up much of the north wall. This is decorated with blank shields and quatrefoil carvings. Near the Easter Sepulchre is a wall tablet in Renaissance style, dated 1562 and probably commemorating the Richardson family of Chaldon.

The tablet is carved with an invocation to be generous to the poor; one phrase calling on all men and women 'To be ever good to The poore and nedy[sic]'. On the south wall is a memorial to Christian Home (d. 1752) who certainly lived an eventful life; she was born in Scotland, sailed to Jamaica, where she was shipwrecked. She survived the wreck and is buried with her husband John nearby.

Off the south aisle is St Kateryn's Chapel, built in the 14th century and now acting as a Lady Chapel. A stained glass window and plaque act as a memorial to the Lambert family, while the north aisle opposite has a window to the Gardiners of Rockshaw.

The oak pulpit is in Jacobean style but actually dates from 1657, making it a rare example from the Cromwellian period. Hanging in the south aisle is a plaster cast of a medieval bell; the original, one of the oldest bells in Surrey, was stollen in 1970. The font is unusual, made of Merstham stone, with a square bowl standing on an octagonal stem. in the porch is a broken 12th-century coffin lid. 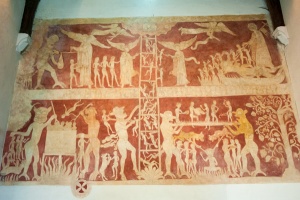 The west wall is almost covered by this superb example of medieval art. The Chaldon paintings are thought to be the work of a travelling monk well-versed in Greek art. The vividly coloured painting shows the Biblical Day of Judgement, with a central Ladder of Salvation making a cross shape with Purgatory above and Hell below.

The painting is made of yellow ochre and red ochre, and spans just over 17 feet across and is over 11 feet high. It was whitewashed during the Commonwealth period and only discovered in 1869 during restoration work. Rev Henry Shepherd, the Rector, noticed colour as the walls were being made ready for lime-washing.

Thankfully he stopped the work to investigate, but not before further paintings on the north wall arch were destroyed. The paintings were initially cleaned by the Surrey Archaeological Society, and later 'preserved' with a wax coating. Over time the wax caused discolouration, so it was removed in 1989 and the paintings restored to their original splendour.

And splendour is the right word; they truly are breathtaking to see. The scene is dotted with wicked imps and demons, designed to tell the story of humanity's day of reckoning to a largely illiterate audience. In the lower right is the Garden of Eden with the 'tree of the knowledge of good and evil' and Satan in the form of a serpent tempting Adam and Eve.

One interesting bit of social commentary is a Bridge of Spikes, which dishonest tradesmen are forced to cross. Tradesmen depicted include a blacksmith, potter, spinners, and a mason. Were these trades deemed more untrustworthy than others?

We are left in no doubt how money-lenders are regarded, for one stands beneath the bridge, swallowed by flames, money pouring from his mouth. He is flanked by figures of lust and envy, while other figures representing the Seven Deadly Sins are scattered throughout the scene.

Figures ascend and descend the ladder to salvation while demons pluck at them. A drunken pilgrim lies at the feet of a demon, while devils throw murderers into a cauldron. It is interesting that the demons have three or four toes, all save one, who has cloven feet. Satan again? 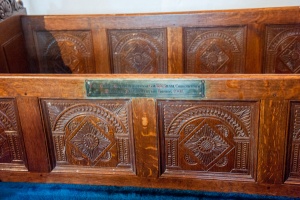 Carved chancel benches
At the lower left is Michael the Archangel weighing deeds while a devil tries to put extra weight on the evil side of the scales. Angels lead the tHree Marys to heaven, while a penitent thief is carried up by another angel. In the lower right are the Gates of Hell, represented by a demon with gaping jaws. One later addition to the painting is a consecration cross on the lower left edge. On a column by the south door is a second cross, over a 'T' monogram representing St Thomas Becket, probably left by a pilgrim.

The Chaldon paintings are easy to describe, but the description cannot do them justice. They truly are superb, a word often misused, but in this case, easily justified. They are a national treasure, and it is exciting to think that the church is usually open so that travellers or even modern pilgrims can appreciate them. 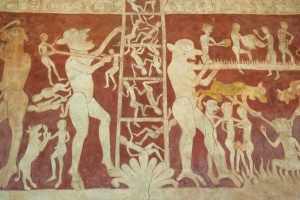 The Ladder of Salvation 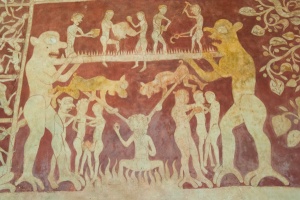 The Bridge of Spikes 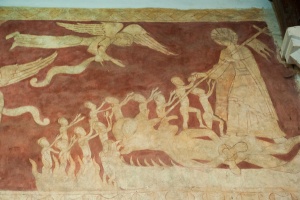 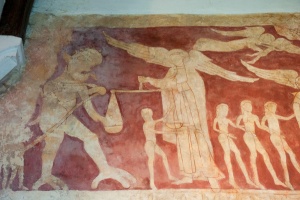 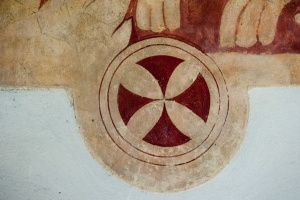 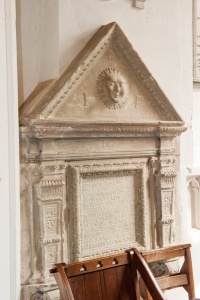 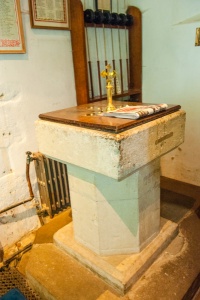 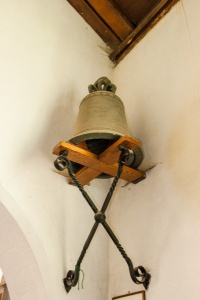 Plaster cast of the
medieval bell 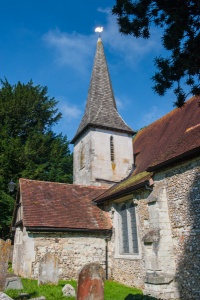 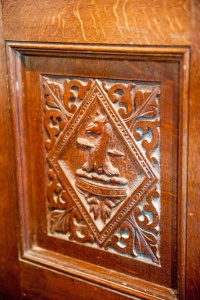 Carved panel in the chancel

More self catering near Chaldon

More bed and breakfasts near Chaldon