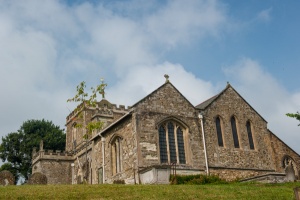 The church of St Mary the Virgin stands on a raised mound as if to dominate the surrounding cottages. The earliest part of this large and attractive building is the sturdy tower, which dates to 1090, but much of the remainder is 15th century Perpendicular Gothic. The two-storey south porch dates to 1460. Above the entrance is a chamber where the inhabitants stored their harness when the Spanish Armada threatened in 1588.

In the south wall is a lancet window and quatrefoil opening sometimes called a Hermit's Squint. This quatrefoil once connected to a hermit cell where a man named Brother Roger dwelt in the 13th century. The squint was probably not built to allow Brother Roger a view of the altar, but rather so that pilgrims could converse with the hermit and ask his advice.

Court records show that in 1233 Henry III gave one quarter of wheat (a bushel) every eight weeks to a Brother Roger of 'Blecingel', which may well have been Bletchingley. Brother Roger is thought to have been one of the first Franciscans in England. 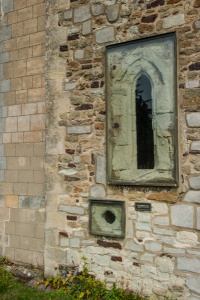 Bletchingley was recorded in the Domesday Book of 1086 when it was held by Richard de Clare, a second cousin of William the Conqueror. Under the Clares it eventually became a 'mesne' or middle borough, meaning it could send representatives to Parliament, but did not have a mayor or council.

This odd system evolved into what was known as 'rotten' boroughs, where the only electors were burgage holders, tenants of the Lord of the Manor, and voted as he wished them to. Under this rotten borough system, MPs from Bletchingley included Lord Howard of Effingham, and two men who would become Prime Ministers; Lord Melbourne, and Lord Palmerston. However, all that was in the future.

The manor of Bletchingley was held by the Clares until 1314, then by the Staffords, Dukes of Buckingham, then in 1539, the estate was given to Anne of Cleves, Henry VIII's fourth wife. Sir Thomas Cawarden managed the estate for Queen Anne but eventually became owner himself in 1547.

Cawarden, whose table tomb stands near the altar, was a fascinating character. He served as Master of the Revels under four Tudor monarchs, from Henry VIII to Elizabeth I (his full job description included 'Keeper of the Tents, Toyles, and Hales'). He became a strident Protestant under Henry and Edward VI and removed all vestments and statues from the church.

He backtracked on his religious views to stay on the good side of the Catholic Queen Mary and rediscovered his Protestant beliefs under Elizabeth. In the end, however, he fell out of favour and Elizabeth threw him in the Tower of London, where he died in 1559.

After Cawarden's death Elizabeth I granted Bletchingley to the Howards, Dukes of Norfolk, but the family fell into debt and the estate was sold to Sir Robert Clayton in 1677. The Clayton family retained Bletchingley until 1835. 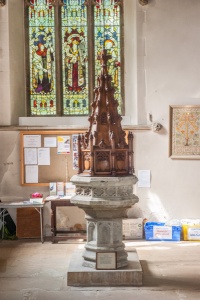 One window is worth mentioning; above the font in the west wall is a window set with Victorian stained glass by the Kemp studio; look for Kemp's traditional symbol of a wheatsheaf. The font itself is mid-15th century, with an elaborate cover carved in 1906 by Albert Maynard, whose ancestor was part of Anne of Cleves' retinue.

On the wall by the font is a very peculiar item; a small model of a boat in a glass case. This was donated by refugees from the Pacific island of Tristan de Cunha who stayed in Bletchingley in 1961-2 when the island was under threat from a volcanic eruption.

The pulpit is Jacobean, the gift of Robert Holman of Pendell, and the Pendell arms are carved on it with the date 1630. The hourglass stand and bracket are also Jacobean, one of very few left in Surrey.

Near the pulpit is a portrait of Archbishop Desmond Tutu, who served as a curate of Bletchingley from 1965-1967. The nave corbels are fascinating, carved with medieval symbols including two Green Men, and a three-faced symbol representing the Trinity. 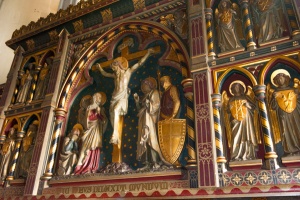 One of the highlights inside St Mary's is the Victorian reredos behind the high altar. This ornately carved piece was designed by GE Street around 1880 and unusually shows Samuel Wilberforce as Bishop of Winchester, surrounded by apostles and a scene of the Crucifixion. Samuel Wilberforce was the son of slavery reformer William Wilberforce and died after a fall from his horse in 1873 when Bletchingley was in Winchester diocese.

The East window above the reredos was rebuilt around 1870 under the direction of William Butterfield, one of the foremost Gothic Revival architects in England. In front of the reredos are four lovely freestanding Jacobean candlesticks.

Tucked away in the north aisle, out of sight, are a series of interesting memorial brasses. The oldest of these brasses dates to 1470 and shows an unmarried woman, her marital status shown by the fact that her hair is uncoiffed. A more impressive brass is that of Thomas Warde and his wife Joan, under the tower. Warde was a wealthy tanner who lived at nearby Little Pendhill and died in 1541.

By the pulpit is a brass of a priest in vestments, possibly a 15th-century rector named Hugh Hextall, chaplain to the Duke of Buckingham and rector from 1451 until his death in 1476. Hextall remodelled the church around 1460, adding the south arcade and south chapel windows. 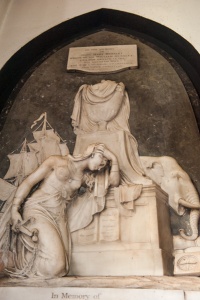 One of the most interesting memorials in the church is one of the most recent. In the north aisle is a plaque to Commander Wilfred Dunderale, a naval officer who played a leading role in capturing a German 'Enigma' machine during WWII. Author Ian Fleming used Dunderale as inspiration for his fictional secret agent James Bond. In the north aisle is a nicely crafted memorial to Thomas Northey (1685-1753), a London apothecary.

Even earlier is a tablet to Nathaniel Harris (1569-1625) who served as rector from 1609-1625. Harris was private chaplain to Lord Chancellor Ellesmere but is best remembered for his role in a controversial election in 1624. At that time Bletchingley was still a Rotten Borough, so when an election was called, 15 burgesses met and elected Sir Myles Fleetwood and John Hayward.

The following Sunday the manor bailiff announced in church that a new meeting including all the burgesses and all the rest of the village inhabitants would meet on the Monday to hold a new vote. Rector Harris added his voice to the furore by preaching on the Biblical text 'The chief priests and elders sought false witnesses'.

The next day thirty burgesses met and elected Sir Myles Fleetwood again, but this time the second MP named was Henry Lovell. Then the House of Commons stepped in; Lovell was sent to the Tower of London, and as for Harris, he was forced to ask for pardon before the Commons, and apologise to his congregation from his own pulpit. 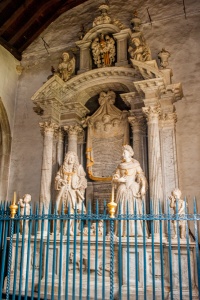 In the north aisle is a lovely wall monument to Dame Mary Bensey in classical style, a females figure kneeling at the base of an urn, while behind her is a ship, and to one side an elephant peers out. Near the south door is a memorial to General Sir William Clayton, a commander of the Royal Horse Guards who played a leading role in the Napoleonic Wars, particularly under Wellington in the Peninsular War.

But it is without a doubt another Clayton memorial that deserves special mention. Almost the entire east wall of the south transept is occupied by a huge memorial to Sir Robert Clayton, erected during his lifetime in 1705 in honour of his wife Martha.

This excellent piece of Queen Anne craftsmanship was created by Richard Crutcher and is set within wrought-iron railings the same age as the memorial. It is one of the finest early 18th century memorials in Surrey, perhaps in the whole of south-east England.

Clayton was born in Northamptonshire, the son of a carpenter, but he acquired a fortune as a Scrivener (bill discounter) in the City of London, essentially a practice of taking on debts at a discount and then either making back the money on interest or foreclosing if the debtor could not pay.

Clayton made huge amounts of money after foreclosing on Mardon, a property owned by the Evelyn family in Godstone, and the Peterborough property in Bletchingley. These and other successful deals made him the largest landowner in the area, and his monument reflects that wealth. It is a staggering, ornate affair, with life-sized statues of the couple upon a base, their costumes gilded and further gilding on a scroll listing their various virtues, beneath a large broken pediment and coat of arms.

The south transept was once the chapel of SS Margaret and Catherine, rebuilt by Hugh Hextall, and the Clayton memorial stands on the site of the original chapel altar.

To the east of the porch is a gravestone carved with crossbones. Local tradition suggests that a pirate is buried here but the crossbones was often used by Freemasons and was also a symbol of human mortality.

More self catering near Bletchingley

More bed and breakfasts near Bletchingley