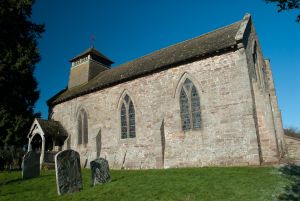 The church of St George at Brinsop was included in Simon Jenkin's popular book, 'England's Thousand Best Churches'. One of the main reasons for that inclusion is the wonderful Norman carving, thought to be the work of the Herefordshire School of craftsmen (see Kilpeck and Shobdon churches).

The church is composed of a 13th-century nave and chancel and an early 14th-century north aisle. The church was extensively restored circa 1866, at which time a bell turret, vestry, and south porch were added. There was almost certainly an earlier 12th-century building on the site, as witnessed by the numerous examples of carvings inside the church which appear to have been reused.

The highlight of the carvings at Brinsop is the tympanum, found set into the wall of the north aisle. The carving on the tympanum depicts St George on horseback, trampling a dragon-like beast. About the figure of St George are a series of nine further carvings, showing beasts, birds, foliage, angels, and human figures. Among the figures are a pair of lions fighting, a serpent, a bull, and a pair of fish.

Immediately above the south door is a much worn medieval wall painting of the Crucifixion. The painting at first glance appear to be mere discolouration in the whitewash, but on closer inspection, you can make out the figure of Christ.

Also at the west end of the church is a simple tub font, dating to the 12th century. Behind the font is a wall plaque with a collection of memorial brasses, and leaning against the wall is a late 13th-century grave slab carved with a peculiar offset orb atop a staff.

The interior features a wealth of work by Sir Ninian Comper, including carved figures, textiles, stained glass windows, and the reredos. There is a pair of marble monuments to members of the Dansey family of Brinsop Court.

The dedication to St George is a reminder of the church's location near an Iron Age hillfort which, according to local legend was the place where the real St George killed his dragon. A memorial stone is set in the field beside the church on the site of Dragon's Well, the traditional location where the dragon was slain.

Brinsop has associations with poet William Wordsworth, who visited the area on several occasions. Wordsworth first came to Brinsop in 1827 with his wife Mary, to visit her brother Thomas Hutchinson, who was leasing Brinsop Court. The poet planted a tree that still stands outside the Court.

In the Lady Chapel is a small information panel telling the story of Wordsworth's connection to Brinsop. A stained glass window memorial to Wordsworth, crafted by Comper, can be found in the south wall of the chancel. In the window splay is a section of 13th-century medieval wall painting. The east window has fragments of 14th-century glass showing St George.

The rood screen is late 14th or early 15th century and is in a wonderful state of repair, obviously helped by Victorian restoration. Atop the screen are four gilded angels by Comper. The Lady Chapel screen is only slightly later, mainly 15th century, and also in extremely good repair. The woodwork is wonderfully crafted and seems almost like lace in places.

Brinsop manor dates to before the Domesday Book. From that book, it appears that there was a church in the village before 1086, but no trace of that building survives.