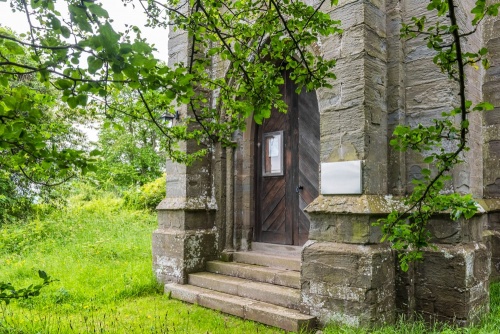 St Mary's Church in the Herefordshire village of Yazor is a Victorian building on the edge of the Wye Valley. St Mary's was built by the Price family of Foxley over the years 1843 - 1855, under the direction of architect George Moor.

The most immediately obvious feature of St Mary's is the slender spire, in very distinct Victorian Gothic style. However, the most interesting feature of Yazor church is the striking interior, which is richly decorated with colourful stained glass, painting, and furniture.

Much of this lush decoration was the work of the vicar, Rev RL Freer. The sanctuary, in particular, is richly coloured. Much of the interior furniture and monuments were salvaged from the old medieval church of St John the Baptist, which is visible across the field. Curiously, the new church was never licensed for burials, so there are no gravestones in the churchyard. Even after St Mary's was completed burials continued to be held at St John's.

Most of the furniture, including the pulpit, tester, altar and reredos, is made from oak grown on the Foxley estate. Over the west door is a cast-iron royal coat of arms to Queen Victoria, made in 1850. 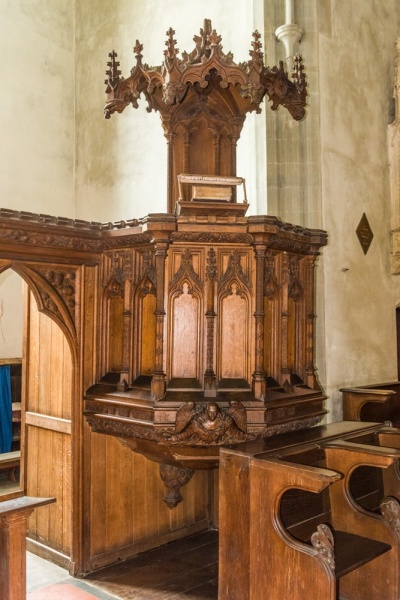 The richly carved pulpit and tester

The church offers a delightful window into the Victorian world. The most obvious Victorian feature is the large cast-iron Gurney stove near the altar. The stove burned anthracite coal, which was cheap in 19th-century England.

The stove was made to stand in a trough of water. The burning coal heated the water which evaporated and humidified the air inside the church. You can see similar Gurney stoves in Hereford and Worcester Cathedrals.

Another clever Victorian feature is drop-down benches in the north transept, used by Sunday school students.

Over the north vestry door is a memorial to Sir Robert Price (d 1857), who built the church, and his wife Lady Caroline Price. Beside it is a memorial plaque to Rev RL Freer (d 1863), who 'beautified this church and built the spire'.

The best memorials, though, are on the west wall. These include some members of the Price family and were salvaged from the old medieval church. Among these is a memorial to Bennett Allen, the son of a former rector of Yazor. Allen emigrated to America where he became a rector. He became an American loyalist, but returned to England during the American War of Independence in 1766. He died in London in 1819. 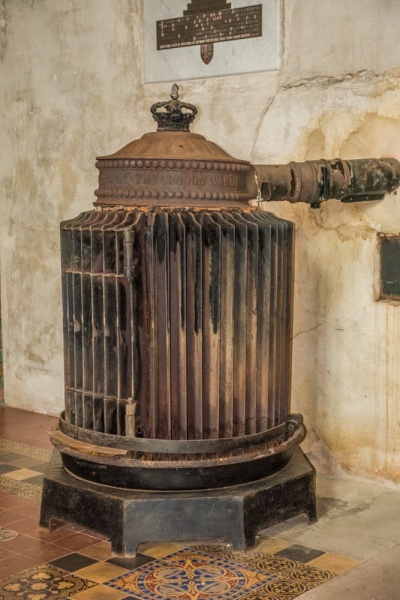 St Mary's is more a family chapel than a parish church. Uvedale and Robert Price of the Foxley estate (both of whom have monuments in the church) created St Mary's to replace the medieval parish church. Sir Uvedale Price began planning for a new church but work had not yet begun when he died in 1829.

Sir Uvedale had been an avid follower of the 'Picturesque School' of thought, which arose in opposition to the contrived landscapes of Capability Brown. Uvedale popularized the re-introduction of flowers - especially roses - into 19th-century gardens.

Sir Uvedale Price's memorial is over the Gurney stove. It depicts his original design for the church, which is different in several details from the finished design, drawn up by AW Pugin. 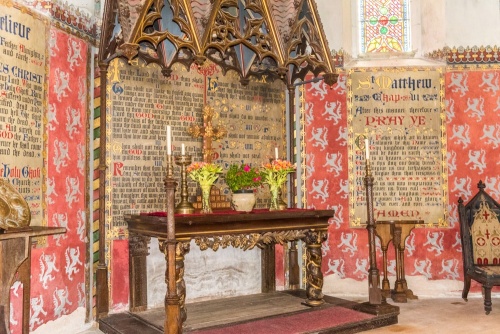 Uvedale Price may have launched the idea of a new church at Yazor but it was left to his son Robert to implement his father's ideas.

He barely had time to enjoy it, however; work finished in 1855 and the Price family sold Foxley to the Davenport family the following year. It may have been the cost of building this opulent new church that forced the Prices into debt, combined with unwise investments.

The Davenport family continued to develop the church; you can see a pair of stained glass windows in the nave installed to celebrate the marriages of both George and Charlotte Davenport in 1866.

The cost of keeping up the church eventually proved too much for the small community of Yazor and it was declared redundant in 1987. The church is no longer used for regular worship and is under the care of the Churches Conservation Trust. 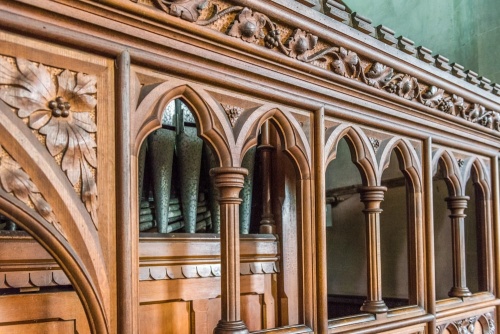 You can easily see the spire of St Mary's as you approach along the A480. Turn onto the lane beside the church, leading to Foxley and Yarsop. There is space for two cars in a layby on the right side of the lane, opposite the church. There is no obvious entrance to the church from the lane.

Don't do what we did and hop the fence into the overgrown churchyard! Instead, walk back to the road junction and you will find the churchyard entrance just around the corner on the A480. 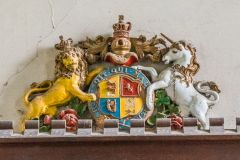 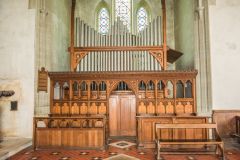 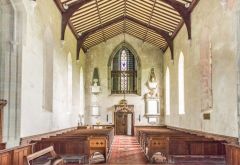 More self catering near Yazor, St Mary the Virgin Church >>

The Agent's House Bed And Breakfast - 8.5 miles
Hereford, Herefordshire
From: £70.00