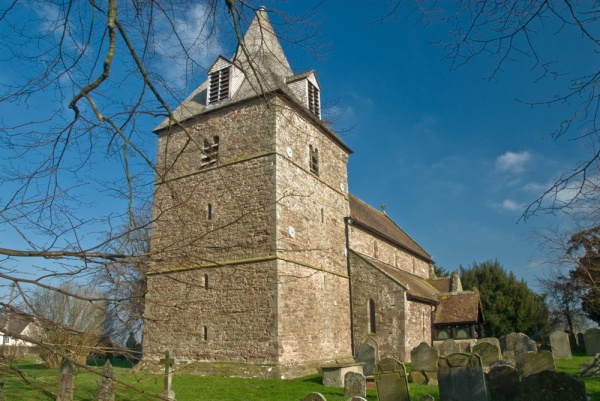 This delightful country church boasts some of the finest medieval stained glass in England (for an alternative claimant to this title see our article on Fairford, Gloucestershire). The exact date when St Michael and All Angels church was founded is not known, but it seems very likely that a stone church with a nave and chancel existed here prior to the Norman invasion in 1066. The triangular roofline of this early building can be seen clearly against the current west wall. 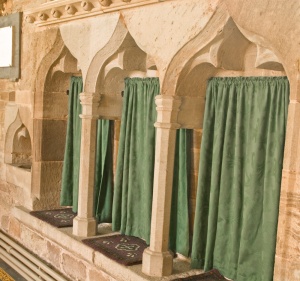 The squat, rectangular tower was added in the 12th century, possibly by the Bishop of Hereford. It is likely that an earlier tower existed, based upon the Saxon style of windows, and the shape of the tower. Sometime in the 13th century, the church was expanded, and the nave heightened and widened. One Early English capital in the nave survives from this period.

The font is 13th century, with the addition of a Victorian bowl. The pulpit is a wineglass design, boasting wonderfully carved wooden panels. In the chancel is a 14th-century sedilia composed of three bays.

And now we come to the glory of Eaton Bishop - the wonder medieval stained glass of the chancel. The east window is composed of five vertical lights, diminishing in height from the centre panel. The glass adorning the windows was created between 1320-40, and was probably made in France, but designed and assembled locally.

The leftmost (north) window is centred on a figure of a Madonna and Child. Next comes St Michael weighing souls. The centre window depicts a Bishop, thought to be Walther, Bishop of Hereford, to whom the manor of Eaton was given by William the Conqueror. An alternative interpretation is that the bishop figure represents St Barnabas. The next window shows the Archangel Gabriel, and the final (southernmost) window depicts the Head of Christ. 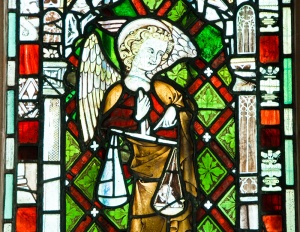 At the base of the east windows are placed 'donor panels'. These extensions of the main window scenes are intended to commemorate the person or organizations who paid for each window. One donor panel has the word 'Cantor', a reference perhaps to Adam de Monmouth, cantor at Hereford Cathedral, who may have been responsible for the window.

During the Second World War the glass was removed from the windows for safekeeping and stored in the nearby vicarage. An interpretive panel illustrates the east window and explains each figure and its meaning.

Taken as a whole, the stained glass at Eaton Bishop is an extraordinary medieval monument, and well worth a trip to see.

A more modern note is struck by a large naval ensign (flag) hung at the west end of the nave. This was flown by the HMS Alcantara during action in the south Atlantic in 1940.