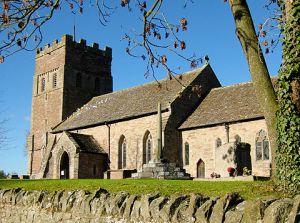 That Norman building was probably founded by the Chandos family, who held the manor of Wellington from the reign of William the Conqueror to the early 15th century. The family also provided the first recorded rector, Henry de Chandos, who served from 1270.

The church is composed of a nave, chancel, north aisle, north transept, south porch, and west tower. The base of the tower is Norman, but the upper stage was built around 1400.

The timber-framed roofs of the north aisle and the porch date to the 14th century. The north aisle roof boasts very nicely carved roof bosses, including one of a 'Green Man', a pagan symbol of fertility. There are plainly carved 12th century north and south doorways.

The font dates to the 14th century and stands under the tower. The south window of the chancel retains the only bit of original medieval stained glass in the church, including a fragment depicting a monk's head. A local tradition says that the church's medieval glass was buried for safekeeping at the Civil War and never dug up again.

The chancel is 13th century and has a beautifully carved piscina in the south wall.

Two memorials at Wellington stand out; the first is that of Benjamin Tomkins (d. 1779). Tomkins was largely responsible for developing the modern Hereford breed of cattle. His memorial can be found above the pulpit.

The second noteworthy monument is that of Sir Herbert Perrott, a 17th century noble and lord of Wellington manor, who was a generous benefactor of the church. Sir Herbert established the almshouses on the east side of the Hereford road (A49), though they have been remodelled since his day. A memorial brass to Sir Herbert is in the chancel.

There are further memorial tablets to the Graves family, and a sombre wall tablet to John Williams of Brinsop Court, who died in 1815. His wife Mary survived him by 32 years, dying in 1847 at the age of 90.

One of the finest wall tablets commemorates Ann Meats, who died in 1830. There is a beautifully inscribed and very touching tablet to the young Thomas Morvan, which reads in beautifully archaic English:

Another 18th-century tablet honours Joshua Mason (d. 1828) with an epitaph reading 'My time was short when death draw’d near, to part from wife and children dear. Little thought my glass was run, til suddenly my breath was gone.'

In the churchyard stand the remains of a 14th-century preaching cross, reaching almost 14 feet high. The top of the cross was broken by iconoclasts during the religious tumult of the Civil War.

More self catering near Wellington, St Margaret of Antioch Church >> 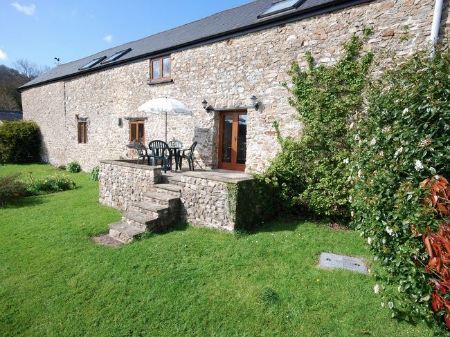 Converted from the original cider barn and approached through attractive grounds it stands alongside the owners 16th century thatched farmhouse. The cottage is bright and welcoming offering superb views from …
Sleeps 4

Situated deep within the vale of Taunton this property is just two miles from the small market town of Wellington ideal for stocking up on provisions for your stay. Further …
Sleeps 4