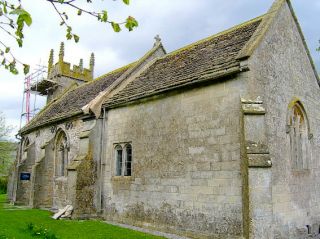 Hardington Bampfylde, St Mary's Church
A quiet country church standing in a farmyard, St Mary's church is substantially Norman, with rebuilding in the 14th and 15th centuries, and further additions in the 17th century. St Mary's boasts one of the smallest complete towers in the country.

The interior is primarily Georgian in character, with some very fine 18th century memorials, including several to the Bampfylde family, the local lords of the manor. The Bampfyle family were closely linked to the village for over 300 years, and the memorials are suitably grandiose. The box pew where members of the Bampfylde family sat for so many years stands at the front of the nave.

Among the Bampfyldes buried at Hardington is Sir Charles, the 5th Baronet. Sir Charles was killed in 1823 by an ex-servant who suspected the nobleman of an affair with his wife, who was employed by the family. Sir Charles was shot in the chest, but might have survived had not a part of his braces lodged in the wound and caused the onset of gangrene.

The interior boasts wall paintings, a carved pulpit, and the royal coat of arms of Charles I. The church fell out of use in the 20th century but was restored by the Churches Conservation Trust, who now care for the property. It is usually open, though access through the farmyard may sometimes be difficult.