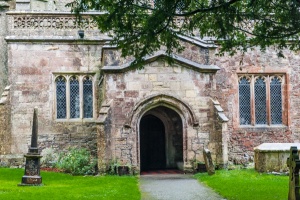 The south porch of St Giles church,
Leigh on Mendip

The church of St Giles began as a chapel of ease for Mells, a few miles distant. The chapel was built in the 13th century and was used only for Sunday mass celebrations. Parts of the south wall date to the original 13th-century church.

We don't know for certain, but tax rolls for 1291 do not mention any church at Leigh, so it was probably still being built at that time. In the 14th and 15th century the building was enlarged with beautiful Perpendicular details, a testament to the wealth of the medieval wool trade in this area.

Curiously, there is no record that St Giles was ever granted the right to hold marriage, burial, or baptism ceremonies, unlike most chapels of ease in the later medieval period.

The striking west tower was built just after 1480. It stands 30 metres high and was used as a beacon for pilgrims travelling to Glastonbury Abbey. The 18th-century tower clock has no face; it simply tolls the hours. 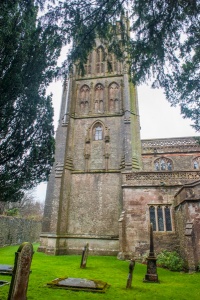 The extremely simple font is Norman, with scallop decoration and a 17th-century wooden cover. Since we know that Leigh did not have the right to perform baptisms in the medieval period it seems very likely that the font was brought to Leigh from elsewhere.

As with so many Somerset churches, the nave roof is very striking, with oak panelling supported on 30 stone figures of angels. The chancel is also beautifully panelled, with highly decorated roof trusses. In the chancel is a late 18th-century monument to the wife of Dr George Moon, a retired naval surgeon.

The pews are late 14th century, and the bench ends are rather obviously carved to match the shape of the window tracery.

There is a pair of medieval piscinas in the south aisle and an aumbry opening. On the sill of the southeast window is a 12th century stone figure of St Catherine. There is a very finely decorated memorial to Hannah Moore, who died in 1722. The memorial tablet is surrounded by beautifully carved depictions of flowers, vines, heraldic symbols, and a skull and crossed bones to symbolise mortality. 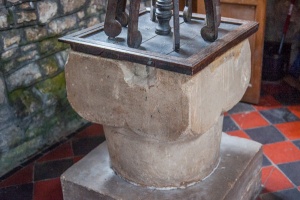 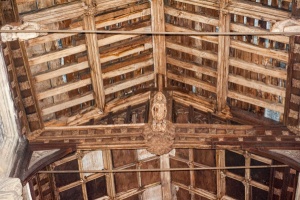 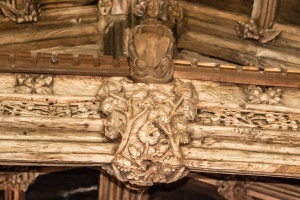 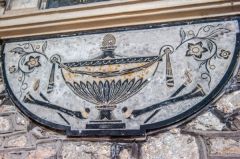 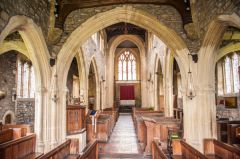 Nearest Accommodation to Leigh on Mendip:

More self catering near Leigh on Mendip

More Hotels near Leigh on Mendip

More bed and breakfasts near Leigh on Mendip