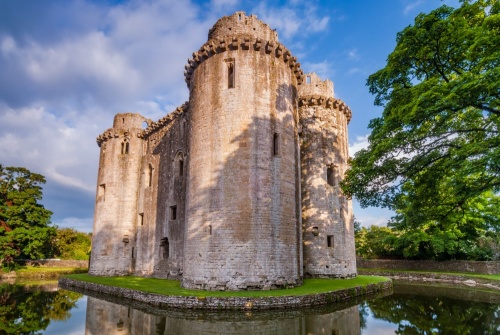 In 1373 a knight named Sir John de la Mare obtained a royal license to crenellate, or build a fortified tower house on the west bank of Nunney Brook, in the centre of Nunney village. De la Mare was a career soldier whose fortune had been made on the battlefields of the Hundred Years War with France.

Or rather, his fortune had been made 'off' the battlefield, by capturing and ransoming wealthy enemies, which was actually why most soldiers went to war in the first place. 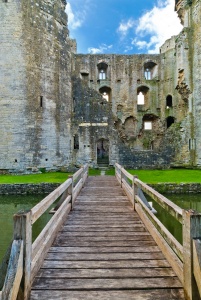 Footbridge across the moat

By the 1370s, when Sir John decided to build his castle, the war had turned in favour of the French, and many veteran soldiers in England engaged in a spate of castle-building, perhaps anticipating that the newly fortified castles would be necessary to counter a French invasion.

Such an invasion never took place, with the result that we are left with a large number of late 14th century castles in reasonable condition. Nunney is one of these. As for Sir John, he went on to become Keeper of Old Sarum (Salisbury) and Sheriff of Somerset.

At Nunney Sir John built a narrow rectangular structure with circular corner towers, surrounded by a wet moat fed from the brook. The moat was set within a larger courtyard encircled by a stone wall on three sides and protected by the brook on the fourth side. Entry was across a drawbridge on the north side. The drawbridge has been replaced now by a modern wooden footbridge.

There were probably a number of subsidiary buildings within the courtyard but none of these survives. The castle itself certainly does, and surrounded by its peaceful moat it presents an almost idyllic picture of a moated medieval castle.

Each corner tower was topped by a conical roof, and battlements project outward around the top of the tower wall. The layout is so narrow on the short side of the rectangle that the corner towers almost meet in the middle! The overall plan of Nunney is very similar to bastilles in France, which Sir John must have encountered during his military career. 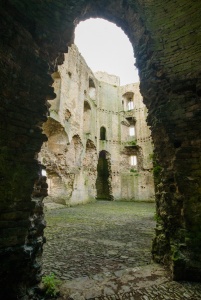 Inside the castle walls

The original castle plans included a kitchen on the ground level, with storage chambers above. Over the storerooms was a great hall and above that withdrawing chambers for the lord and his family. A small chapel opened off these private quarters. All the private accommodation chambers are set within the towers

Sometime in the late 16th century, the castle was purchased by Richard Prater, a wealthy London merchant, who proceeded to bring the medieval accommodation up to his idea of modern standards, creating a building much more geared towards comfortable living than defence.

I mentioned earlier that Sir John de la Mare may have built Nunney anticipating fighting off a French siege. Nunney was eventually subject to a siege, but it was not for 270 years after it was built, and it was not the French, but the Parliamentarian army who threatened the defenders. In 1645 the Roundhead army besieged Nunney and its Royalist garrison.

The Royalists held out for only two days before surrendering. Parliament decided to slight the castle to make it unsuitable for military use. This they did, though the walls were left almost intact, and the result is the evocative ruined shell we see today. Much of the outer shell is still intact, save the north wall, which was damaged during the Civil War siege and eventually collapsed on Christmas Day, 1910.

Though the castle is in now the care of English Heritage, it is open to visitors at any reasonable time, which essentially means whenever you fancy. I showed up before the crack of dawn because I fancied photographing the castle in the first light of morning, and I was able to stroll in and photograph to my heart's content long before any sensible person would have woken up.

A beautiful example of a moated medieval castle, set in a peaceful village. A delight to visit. Architectural historian Nikolaus Pevsner called Nunney the 'most impressive castle in Somerset'. Who am I to argue?

There are no facilities to speak of, but Nunney is still well worth seeing. Across the road is the delightful medieval parish church of All Saints, which is usually open daylight hours. 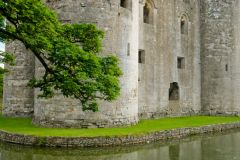 More self catering near Nunney Castle

Self Catering near Nunney