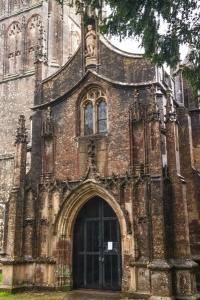 The approach to the church of St Andrews is one of the prettiest in Somerset, up a medieval street, with the tower of the church looming above the historic buildings that hem the churchyard. Beside the churchyard you can glimpse the lovely manor house, held by the Horner family and their descendants, the Asquiths since the 16th century. The most famous Asquith was Sir Herbert, who rose to become Prime Minister.

As you enter the churchyard look beside the path for a memorial to poet Siegfried Sassoon.

Most of the church dates to the late 15th century, including the striking west tower, which is beautifully decorated with Perpendicular carvings. There is a faceless clock, which strikes the quarter hours. Even more attractive to my eye is the late 15th-century porch; a lovely creation of pinnacles and extravagant Perpendicular detail. As you pass through the porch look up at the fan vaulted ceiling. 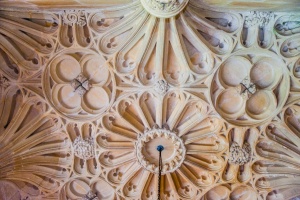 Fan vaulting of the porch ceiling

Outside the east end of the church is an area set aside for the graves of rectors, and beyond this is an area with graves of the Horner and Asquith families, as well as Lady Violet Bonham Carter.

The nave and clerestoried aisles make the interior spacious and filled with light, even on a dull day.

As you enter the church via the 1485 porch, you can't help but notice a striking equine statue at the west end of the north aisle. This statue shows Frances Horner, a lieutenant in the 18th Hussars, who was killed in action in France during WWI. The statue was sculpted by Sir Alfred Munnings, and the base was designed by Sir Edwin Lutyens. Frances, aged 28 at the time of his death, was the heir to the Horners of Mells. 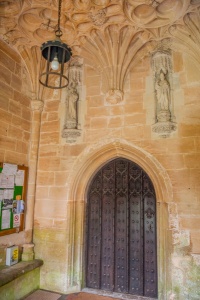 The south doorway and
porch vaulting

In fact, it is the variety of Victorian and early 20th century memorials that are one of the most fascinating features of Mells church. Under the tower is an appealing gesso memorial to Laura Lyttleton, designed by Edward Burne-Jones in 1886 and featuring a very large peacock. Laura Lyttleton was the sister of Margaret Asquith.

Opposite the Lyttleton memorial is a memorial to Raymond Asquith, the son of the Prime Minister Sir Herbert Asquith, who died in WWI. The inscription is carved over a laurel wreath designed by Lutyens. A sobering reminder of Asquith's death is a wooden cross on the wall of the Lady Chapel. The cross was brought back from France after Asquith's death while leading his men at the Battle of the Somme on 15 September 1916.

As you stand under the tower, pause to look up; the tower vaulting is simply superb, another beautiful example of late 15th century Perpendicular fan vaulting.

In the south aisle is a brass plaque to the Fussell family, dated 1826. Beside it is a rather lovely tapestry designed by Burne-Jones and stitched by Lady Frances Horner. Beside the tapestry is one of the oldest objects in the church, a mid-17th century Italian reading desk with carved Biblical figures including King David paying his harp.

Most of the benches are 19th century, though a few Jacobean benches remain. Other 17th century pieces of benches have been reused as panelling. Other features include a brass chandelier of 1721 in the chancel, a Norman tub font, and fragments of medieval stained glass in the north aisle windows. Most of the window glass was made during the 1840s when the Horwood brothers established a craft school in the rectory.

The Victorian pew ends were also made at the craft school.The marble altar was brought from India by the Horners. Nearby is a late 17th century wall monument to the three daughters of George Horner.

St Andrews is a delightful church. The setting, surrounded by the manor and medieval buildings of New Street, is picture perfect, and the combination of the 15th-century tower and porch is a thing of beauty. It is rare that I'm so fascinated by Victorian and 20th-century memorials as I was at Mells; the Horner and Asquith monuments are fascinating and give a real insight into more modern history. 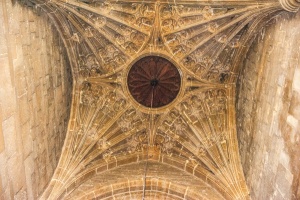 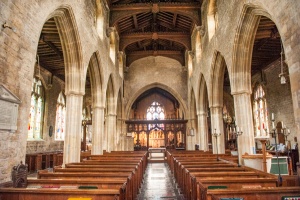 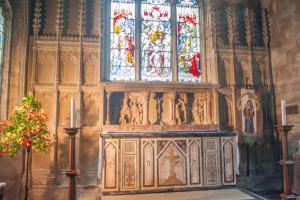 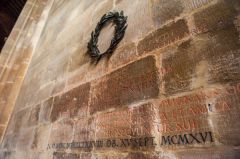 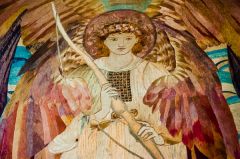 More self catering near Mells

More bed and breakfasts near Mells

Self Catering near Mells