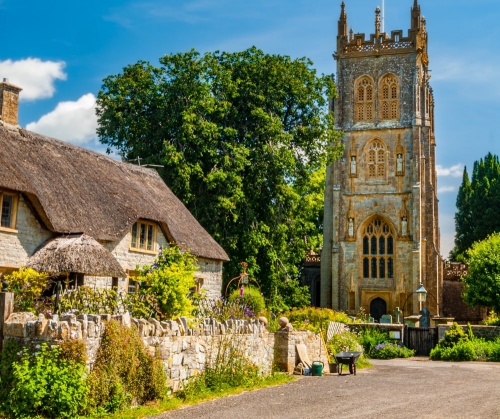 The 13th-century church of St Mary the Virgin stands in an idyllic location, surrounded by thatched cottages, in the rural Somerset village of Isle Abbotts, eight miles east of the county town of Taunton.

In common with many Somerset churches, St Mary's boasts a superb west tower, erected in the early 16th century and decorated with grotesque carved figures known locally as hunky-punks. There are eight hunky punks in addition to ten late medieval sculptures set into statue niches. 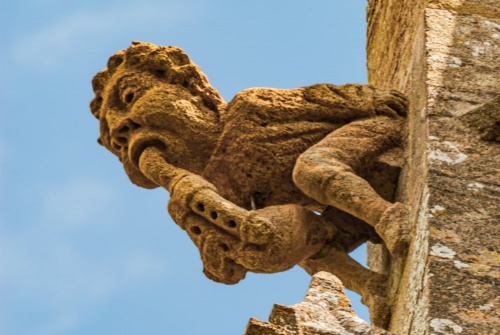 Hunky punk figure of a bagpiper

The peculiar term 'hunky-punk' is native to Somerset and derives from 'hunkers', squatting on haunches, and 'punchy', for a stocky build. Hunky punks are a common feature on medieval churches throughout Somerset, usually projecting from the top corners of towers or porch roofs. Unlike gargoyles, which act as drains to carry water away from the church walls, hunky-punks are purely decorative.

The hunky-punks adorning Isle Abbotts Church are a mix of fantasy creatures, some horned, others with bared teeth and sharp claws. one amusing figure projecting from the northwest corner of the tower portrays a man playing the bagpipes. 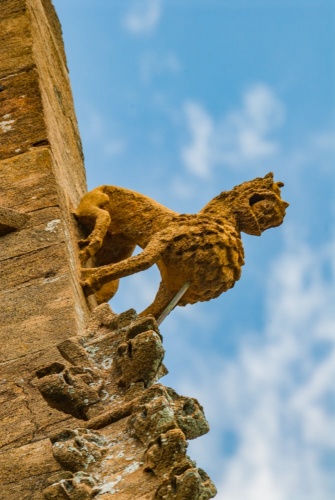 While hunky punks are not unusual in Somerset churches, the sculptures set into niches in the tower walls are rare survivors. Many Somerset churches have niches, but the statues were removed or destroyed during the Reformation, but here in Isle Abbotts ten sculptures remain. Two niches -- the lowest on the west face of the tower -- are empty.

The remaining niches on the west face are filled with statues representing St Peter, St Paul, the Virgin and Child, and the Resurrection. On the south face are statues of St George, St Margaret of Antioch, and St Catherine, to whom the church is dedicated.

The only remaining statue on the north side is the Archangel Michael, while on the east side are statues of St John the Baptist and St Clement. Note that beneath each statue niche is the figure of an angel holding a heraldic shield or a book. Each angel figure is unique. 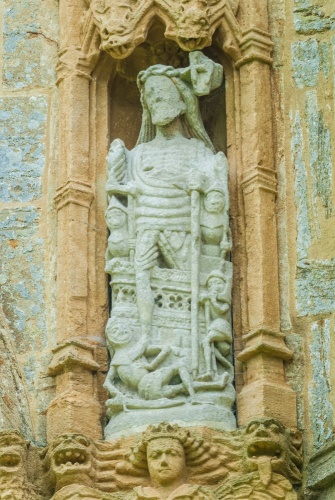 Medieval sculpture of the Resurrection

The excellent Exploring English History website suggests that St Clements, the patron saint of sailors and a figure normally associated with the sea, is carefully placed facing across the Somerset Levels in an attempt by locals to protect against flooding.

While the church tower deserves a detailed examination, don't neglect the church interior! Before you even reach the church doorway you pass through the embattled south porch, with an outstanding fan-vaulted ceiling. The church interior is composed of a wagon-roof nave with a north aisle and a chancel separated from the nave by a 15th-century timber rood screen.

The floor is made of large stone flags with embedded gravestones. A pair of 17th-century memorials are set into the chancel floor. 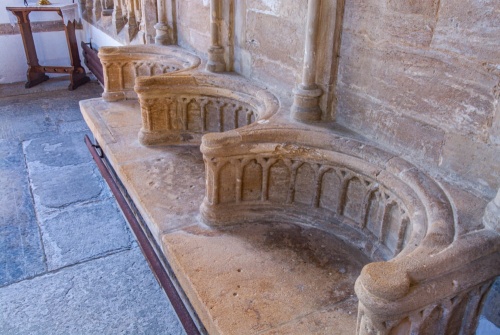 Historical highlights include a large, roughly-hewn Norman font on a large circular central stem and four smaller outer shafts. The bowl is carved with figures of a dove and several dragons. The tower is separated from the nave by a Jacobean screen. The pulpit likely dates to the late Jacobean or early Georgian period.

A medieval hagioscope, or squint, pierces the wall on the north side of the chancel arch and gives a view of the high altar to parishioners seated in the north aisle.

In the chancel is a delightful three-seat stone sedilia carved around 1300. Above the seats rises finely carved blind arcading. Immediately east of the sedilia is an ornately-carved piscina flanked by more blind arcading. 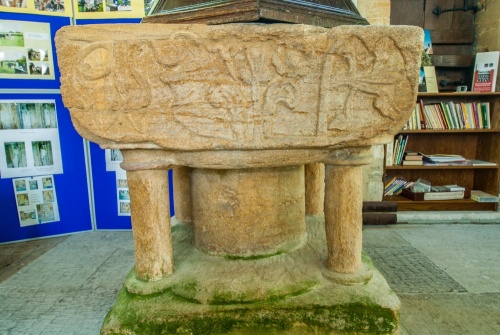 There are 15th-century pews with traceried bench ends and a medieval parish chest. Set into the chancel floor are small glazed tiles thought to have been brought here from Muchelney Abbey after the abbey was suppressed by Henry VIII. Fragments of medieval glass remain in the chancel windows.

We loved visiting Isle Abbotts' beautiful parish church. Somerset is a county blessed with a wealth of beautiful medieval churches, and this is among the very best. We highly recommend bringing a pair of binoculars or a camera with a good telephoto lens simply to be able to see the tower sculptures and hunky punks more closely.

The church stands, appropriately enough, at the eastern end of Church Street. Isle Abbotts is reached by minor roads from Fivehead, off the A378. St Mary's Church is open daylight hours for visitors and was open when we visited on a lovely summer's day. There is parking opposite the church. 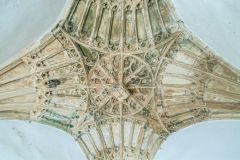 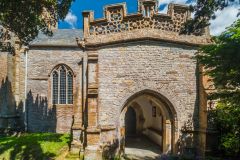 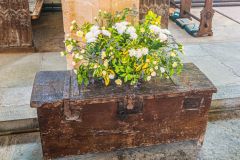 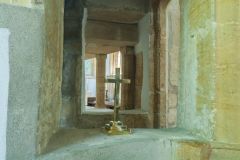 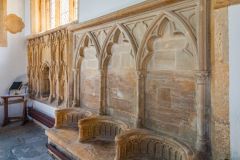 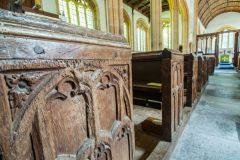