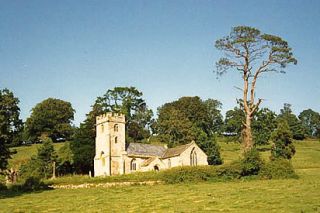 Stocklinch Ottersey, St Mary's Church
The church of St Mary's stands in an exposed position atop a hill, with excellent views over the surrounding area. The church is primarily a product of the 13th and 14th centuries.

The oldest feature in the church is the Norman font, but perhaps the most impressive part of the interior is the Decorated Gothic south transept. Though this has been the subject of some Victorian restoration, it does not detract from the wonderful medieval craftsmanship.

The transept is full of monuments to members of the local Jeffreys family. Set into the sill of the south window is a 13th-century effigy of a woman. The window itself is a delightful Decorated Gothic creation, with unusual radiating tracery. A piscina in the south wall features a carved head, as do the corbels of the chancel arches.

There is a chantry chapel erected by Ralph de Stokelinche in about 1330, with a chantry priest to say prayers for his soul. By the time chantries were suppressed at the Reformation the Stokelinche chantry bequest had been absorbed into the rector's living. In 1606 two plots of land associated with the rectory were still called Chantery Haye and Chanterey Pitt. (Thanks to the Stocklinch village website for this historical snippet).

NB. There is an amusing old story that attempts to explain why there are two churches in Stocklinch parish. According to the tale, many years ago two sisters were both in love with the vicar. Each sister built a church, in order to attract the vicar's attention.

The less romantic truth is that there were once two parishes, Stocklinch Ottersey and Stocklinch Magdalen, and that the parishes were later combined into one.

The church is no longer used for regular worship and is looked after by the Churches Conservation Trust.