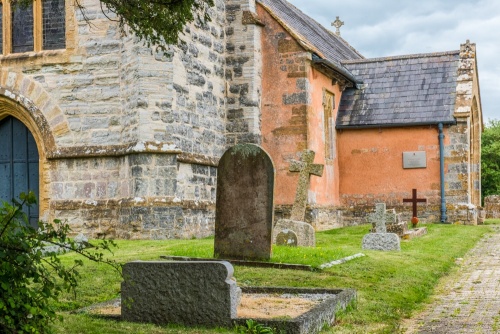 At first glance, the west tower of Thurlbear's church seems oddly out of touch with the rest of this country church. The tower is 15th century and rises in three stages to a battlemented top. It is built of pale limestone, while the low nave and chancel are built of reddish stone, giving the whole building a peculiar two-toned effect.

Another reminder of that early building is the Norman font, as is a section of a 12th-century window incorporated into a lancet in the chancel. A squint pierces the wall of the south aisle to permit a view of the main altar.

When the new west tower was added in the 15th century the aisles were narrowed, suggesting that Thurlbear had become much less prosperous as the Middle Ages went on. The bells hanging in the tower were cast around 1450 and may be the oldest in Somerset. In the churchyard stands a cross dating to the 15th century while the old manor house and tithe barn stand nearby.

In the church is a wonderful collection of local stories about the history of Thurlbear. One story tells of the clash on Whitsunday in 1607 between William Jennings, the priest, and a local man named Robert Harriss. It seems that Harriss not only avoided going to Sunday church services but was engaged in a very noisy game of bowls on the church path, shouting and swearing loudly.

The furious Jennings stormed broke off his service, out of the church, grabbed Harriss and excommunicated him on the spot. In order to get excommunication removed Harriss had to don a white sheet, walk in procession to the church carrying a candle, and apologise in front of the congregation and vow never to sin again. 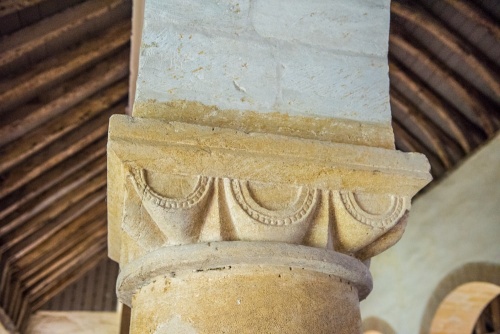 A 12th-century capital in the nave

One story that isn't immediately obvious is represented by the west window, given in memory of Henrietta Cook. Henrietta wanted to marry John Surtees, but her father was against the match. In spite of his opposition, the young couple eloped and were married. The stained glass depicts the Biblical tale of Jacob and Rachel. It is an apt choice, for Jacob and Rachel were also - temporarily - kept apart by parental opposition. It seems that Henrietta or her descendants were making a point.

In 1941 a German land mine damaged the tower and the nearby school building. The bells were restored and rehung in 1983.

St Thomas fell out of use in the late 1980s and has since been in the care of the Churches Conservation Trust. It is usually open daily to visitors and was open when we visited despite the fact that the official CCT website says that you have to get the key from a local keyholder. 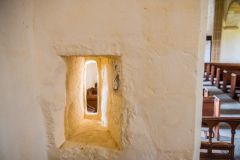