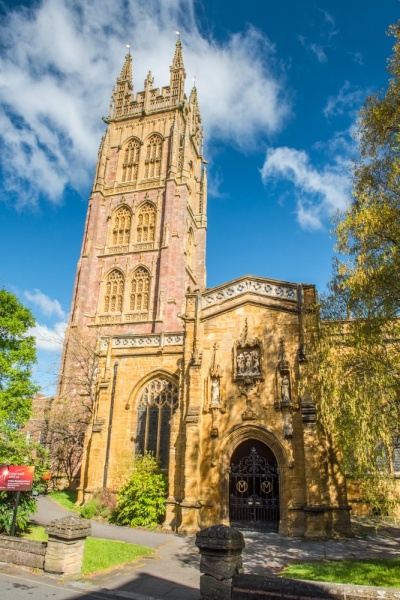 St Mary Magdalene is a beautiful medieval town church in the centre of Taunton. The church is known for its superb Perpendicular Gothic tower, the highest in Somerset at 163 feet. Simon Jenkins, the author of 'England's Thousand Best Churches', called it the most beautiful tower in Britain.

The history of St Mary Magdalene goes back to the late Saxon period when King Ine established Christianity in the Taunton area. The earliest church would have been built of timber, but this was rebuilt in stone under Henry of Blois, the powerful Bishop of Winchester, in the late 12th century. Until 1308 the church served as a chapel for Taunton Priory, but in that year Bishop Hazelshaw made it a parish church in its own right.

Most of the present church dates from the 15th century and is a superb example of Perpendicular style, with high, pointed arched windows and an ornate parapet ridge over the south porch and nave roofs. Above the porch is a parvise, a small chamber often used as a residence by the parish priest.

The tower was built between 1488 and 1514 and financed largely by wealthy wool merchants. At the top is an elaborate crown made of filigreed stone so fine that it looks like lacework from the ground level. The tower was restored in 1862 by Sir George Gilbert Scott, who recreated the medieval pattern with painstaking exactitude.

When the restoration was complete the donkey that had hauled the building stone up the tower was hoisted to the top so he could 'survey' the result of his hard work. The donkey's reaction to this dubious special treatment is not recorded. 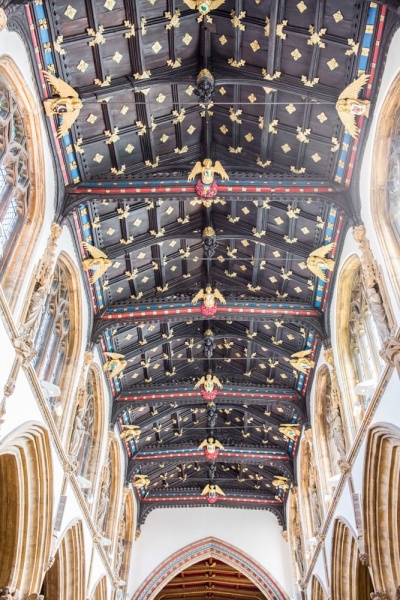 The interior is almost unique in having two pairs of aisle flanking the central nave. The aisles are supported on a forest of slender pillars, with light admitted by large clerestory windows. The effect is sumptuous, with carved angels decorating the nave capitals.

The oldest part of the church is the 13th-century arcade separating the two north aisles. Carved fragments of the chancel arch may be even earlier. There are pieces of medieval stained glass in the clerestory windows, but most of the medieval glass was destroyed by Oliver Cromwell's soldiers in 1649.

The chancel windows were made by the famous firm of Clayton and Bell to commemorate Queen Victoria's Golden Jubilee in 1887.

Most of the interior furnishings are Victorian, the result of a sweeping restoration launched by Revd Dr James Cottle, who was appointed to the living in 1840. Cottle was a popular preacher and a follower of the new ecclesiological movement. In 1842 he came to a pact with his parishioners; if they would restore the walls, floors, and roof, he would install a new east window and remove the high-backed box pews in favour of open benches.

Curiously, the church interior has relatively few memorials, far fewer than you would expect for a church of this size and importance. The lack of monuments probably stems from Taunton's reputation as 'poor, Puritan but proud'.

One monument worth noting is in the outer north aisle, where you will find a life-sized memorial to Robert Gray, a wealthy merchant and alderman. Gray established the almshouses on nearby East Street. 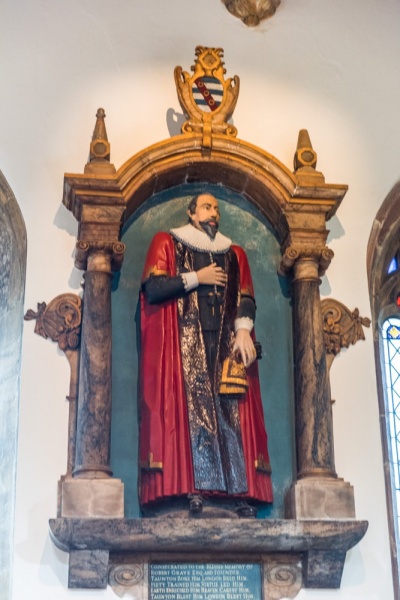 The ornate pulpit dates to 1868. It replaced a wooden pulpit that was sold to Temple Methodist Church, where it can still be seen.

Flanking the chancel arch are carved heads said to represent Henry VII and Archbishop Wareham of Canterbury. In the chancel is an outstanding 1882 organ built by Henry 'Father' Willis, one of the great organ makers in history, whose instruments grace three cathedrals and the Royal Albert Hall in London. Appropriately, the chancel ceiling is decorated with angels carrying musical instruments.

Behind the high altar is an ornate Victorian reredos depicting Christ and his disciples in the Garden of Gethsemane. If you look closely you can spot carvings of a rabbit and a lizard.

St Mary Magdalene is the regimental church of the Somerset Light Infantry. The east window in the south aisle was given by soldiers serving with the Regiment in India in 1912. Each man gave a day's pay to raise enough money for the window, which depicts people and places connected to Taunton and to the Regiment.

If you get a chance to climb the spiral stair to the top of the tower, take it! We were very fortunate because we asked one of the very helpful church guides a few questions about the church, and they asked if we would like to climb the tower and see the views. Naturally, we said yes!. We got to see the re-hung bells in the bell-chamber and then ascend to the top of the tower, The views over Taunton are stunning and well worth the effort of climbing the highest tower in Somerset!

St Mary Magdalene is very easy to reach on foot from central Taunton and is usually open daily to visitors. 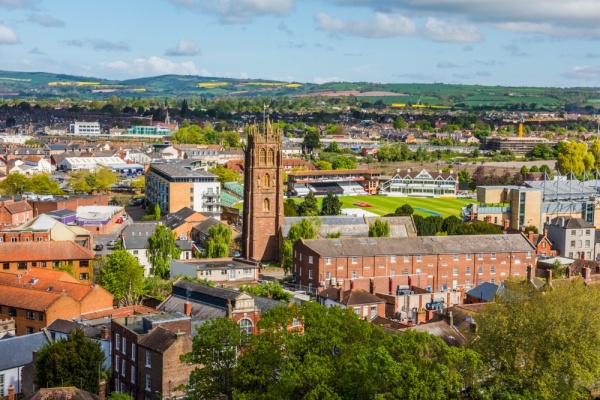 The view from the church tower 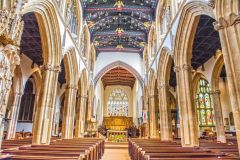 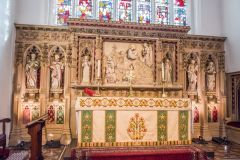 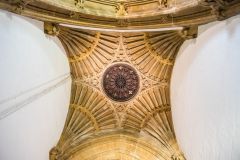 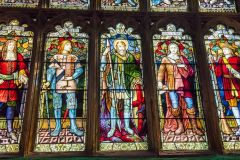