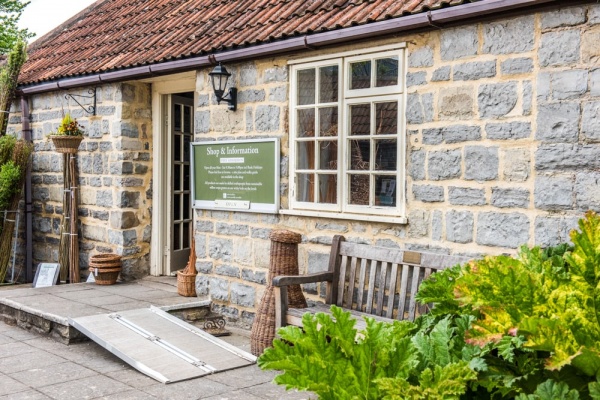 The Willows and Wetlands Centre is a combination museum, shop, and heritage centre exploring the history of using Somerset willow to make a huge variety of items from baskets to carriages, chairs to carts.

The Centre is a part of the Coates English Willow Company, one of the longest-established companies involved in growing willow and using it to create items for sale around the world. The Coate family have been growing willow on the Somerset Levels since 1810 and make a huge array of baskets, handcrafted from willow grown within 3 miles of the Coates farm.

The Willows and Wetlands Centre occupies outbuildings linked to the main Coates shop and production areas, in a setting above the River Tone. Below the Centre are managed water meadows where willow is grown using traditional methods, and there are signposted circular walks through the meadows and along the river.

What is so special about the Centre is that here you can see the entire process of this traditional craft, from withy beds where willow is grown to the finished product available for sale in the Coates shop beside the museum exhibition area. You can learn about the craft of growing willow and how the withies are used to make baskets and a huge variety of other willow products.

The sheer variety of willow items is one of the eye-opening features of a visit to the Willows and Wetlands Centre. It is staggering to see how many different products have been made with willow over time. 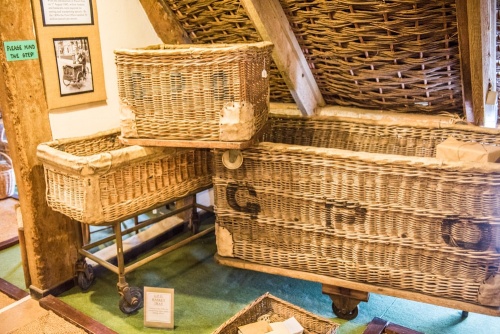 The unique wetland landscape of the Somerset Levels is a perfect environment for growing willows. The slender willows used in basket-making are known as withies. Willows grow very quickly, and in a single growing season (late May-early October) a willow rod can reach 8 feet in length.

New willow beds are planted each spring using cuttings from the previous year's crop. It can take up to 3 years for a new willow bed to become productive, but once it is established the bed can provide willow annually for up to 30 years.

Each willow plant produces roughly 30 rods and the dead leaves are allowed to decompose and provide nutrients for the soil. This means that no fertilisers are needed. The willow beds also provide a habitat for birds and animals.

Though machines are now used to cut the willow rods and strip the bark from the rods, most of the basket-making process is the same as it has been for centuries. 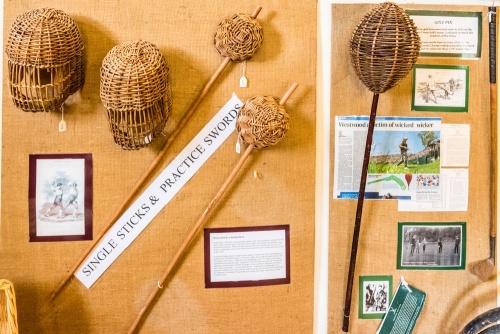 Among the most unusual items is a singlestick, a practice weapon used by the Victorian army. Singlestick fighting goes back to the Tudor period when 'backswords' were used as a form of competitive combat. In the 17th century, this evolved to a singlestick, a long, straight staff of wood. Singlestick competition was popular at country fairs, where champion fighters called gamesters took on challengers. The winner was the first to draw blood from his opponent's forehead.

In the 19th century this traditional combat died out by the concept was adopted by the army for training swordsmen. The singlestick had a wicker knuckle guard and soldier trainees wore a wickerwork helmet for protection. Use of the singlestick continued in the military until the 1930s.

Another odd willow item with a military connection are wicker frames for bearskin hats such as those still worn by the Brigade of Guards. The willow frames were introduced fore bearskin hats after the Crimean War and the first frames were made by the GW Scott & Sons company.

Willow was also used to make military chests, such as those used to carry munitions. The willow material was suitable because it carried much less risk of an accidental spark than a metal container. There are also several willow boxes used by the air ambulance service in WWI.

Another wicker item on show is an eel trap. These traps were traditionally made of willow and have been in use in different parts of the country for at least 1000 years. One eel trap was made for the filming of 'Robin Hood'.

On display is an Orkney Chair, made by Orcadian islanders from driftwood with a chair back woven from straw or willow.

One of the star items on display is a very large postal cart made with woven willow. That is just one of a huge variety of transport-related items made from willow, including children's carts, prams, push-chairs, and delivery baskets affixed to bicycles and tricycles. There are also several examples of GPO Basket Tray used until the 1930s for transporting letters within post office sorting offices. One other fascinating transport-related item is a late Victorian willow casing for a coaching horn.

In addition to the display of willow items, there is a small exhibit of tools used in the production of the items, such as a rapping iron, bodkins, clamps, cleaves, and shaves of different styles. 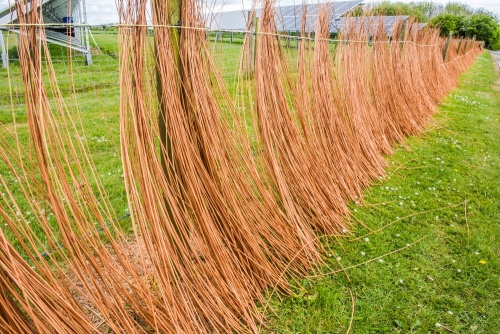 There are three signposted walks from the Centre, varying from 1km to 3.25km in length. The easiest and shortest walk is a Reduced Mobility Access trail leading down to the river and back, with an optional loop through a 3-hectare stand of native broadleaf trees including ash, oak, whitebeam, hazel, walnut, and cherry.

The second circular walk is the Cames Mead trail, which extends the first walk with a 1km loop through managed meadows along the river where you can see a windpump used to drain the marshy ground, a tilting weir, and a sluice gate also used to control water levels.

The third and longest route is the Windmill Hill Walk, which follows the same route as the first two walks to the river, where it turns and follows the river bank to Hook Bridge before climbing back up by way of Windmill Hill. There you can view a traditional pole windmill and enjoy a panoramic view over the river below and across to Hay Moor and Curry Moor.

All three walks are signposted and colour-coded and all three pass a collection of living willow structures, a modern hut used as a classroom for young people to learn about the woodlands and wetland environment, and a collection of willow sculptures scattered along the trails.

Visitors can also take guided tours of the Centre that take in all aspects of growing willow on the Somerset Levels, harvesting it, and making a variety of items.

Our family thoroughly enjoyed visiting the Willows and Wetland Centre. It provides a remarkable insight into this traditional craft and its part in the history of the Somerset Levels. The Centre is free to explore and is open during regular business hours. It is well signposted from nearby roads and there is plenty of free parking. 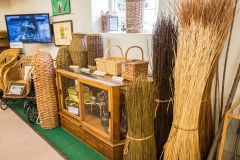 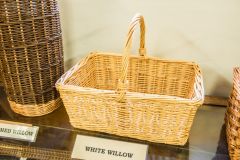 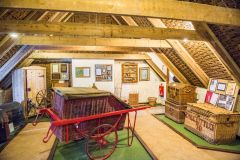 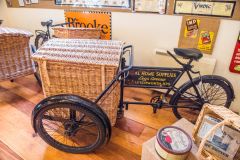 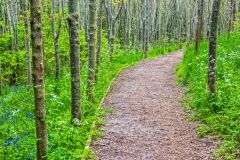 More self catering near Willows and Wetlands Centre

More bed and breakfasts near Willows and Wetlands Centre