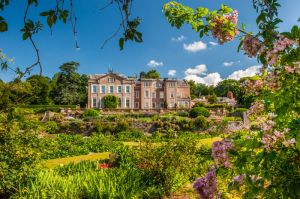 A mix of three historic gardens, Hestercombe is the happy result of a collaboration by Sir Edwin Luytens and Gertrude Jekyll who created a formal Edwardian garden in the larger landscape of a 40-acre Georgian landscape garden created by Copelstone Warre Bampfylde. Enjoy woodland walks, classical temple, waterfalls, and breathtaking views across the Vale of Taunton.

The Hestercombe estate dates to at least the 11th century when it was owned by Glastonbury Abbey. The current manor house dates to the 16th century and was built for the Warre family. The house was extended in the 18th century, then comprehensively rebuilt by Edward Portman, 1st Viscount Portman in 1875. The Victorian facade hides the earlier historic core of the building.

In the late 18th century the grounds surrounding the house was laid out as a fashionable landscape garden in typical Georgian style, with neo-classical follies, water features, and a great cascade. The designer was Coplestone Warre Bampfylde, a friend of Henry Hoare of Stourhead. 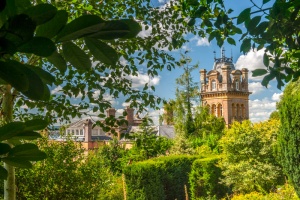 A glimpse of the house
from the Victorian Shrubbery

In the 1870s a formal parterre was laid out beside the house by Henry Hall, but the real change came in 1904 when the architect/gardener team of Sir Edwin Lutyens and Gertrude Jekyll were called in by the Hon E.W.B. Portman to create a new Edwardian garden in Arts and Crafts style.

Jekyll was one of the first gardeners to incorporate colour theory in her designs, and drew on the works of Impressionist painters as well as using texture as an essential ingredient in laying out a garden. The result at Hestercombe is a triumph and influenced a generation of gardens around Britain.

One area of the new garden was the Great Plat, combining a formal parterre with hardy herbaceous plants. The Great Plat is set between raised terraces with water channels made of brick.

Another striking feature is the Orangery, designed by Lutyens and listed Grade I for its historic value.

There is a large Dutch garden at the east end of the site, with intermingled perennials such as China Rose, fuchsia, and dwarf lavender.

The gardens stretch to 40 acres and cover three distinct areas; the formal Edwardian area near the house, the Victorian terrace and shrubbery, and the Georgian landscape garden. Exploring Hestercombe is like walking through a timeline of garden history.

The gardens have appeared on the popular BBC TV series 'Gardens Through Time '. 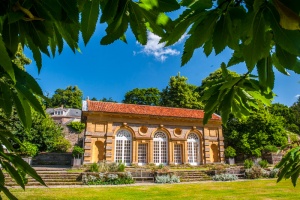 The Grade I listed Orangery

I visited Hestercombe on a sunny morning in late July, when the summer colours were at their height and the air seemed full of the scent of roses. Most of the rose aroma came from the magnificent formal garden below the house. This area is truly stunning, a beautiful example of formal terraces on two levels, centred around a fountain on the upper terrace and a geometrical lawn bounded by a colourful pergola on the lower terrace.

The Georgian pleasure grounds extend behind the house, following a low valley with a series of pools linked by a stream. On either side, the hills rise up, with paths leading through stands of beautiful old trees to a series of eye-catchers, or follies. One of these is in the style of a Gothic summerhouse, another like a Greek temple, while yet another looks like a thatched hut. Families will love the Georgian gardens; there is plenty of space for kids to run around, and the follies act like magnets for younger visitors.

Though the gardens at Hestercombe rightfully get most of the attention, it is worth mentioning that the house is gradually being turned into a gallery space, as well as serving as an event venue. When I visited there was an exhibition of garden photography, focused on historical photos by Gertrude Jekyll, many featuring the gardens at Hestercombe during their development under her direction. It was fascinating to see the gardens in old photos before they had assumed the shape we see now.

The house itself is a lovely example of a Victorian mansion, though it is largely unfurnished. The staircase hall and the staircase itself are wonderful examples of luxurious 19th-century architecture.

It is really the contrast of the gardens at Hestercombe that makes it so special; the combination of 18th-century landscape gardens with later Victorian and Edwardian formal gardens make Hestercombe a delight to explore. Now that the house is once more open to the public it is even more enjoyable to visit! 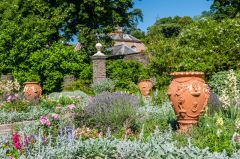 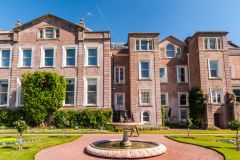 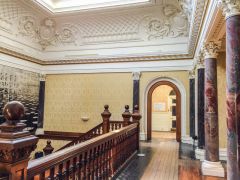 More self catering near Hestercombe Gardens >>