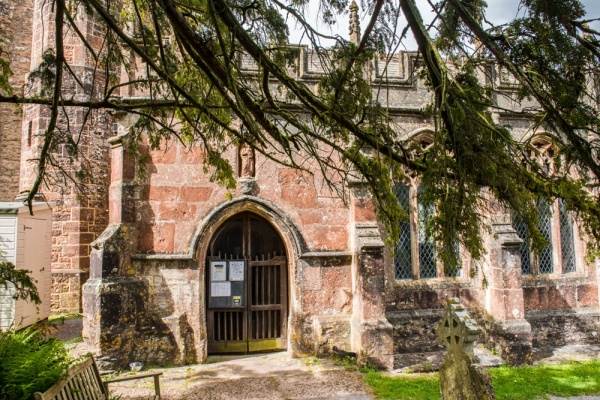 Monksilver is a small village in north-west Somerset lying between the Quantocks and the Brendon Hills. The name probably comes from Latin for 'Monk's wood'. The parish church of All Saints dates to at least the 12th century, though most of the current building is the result of a 14th-century rebuilding.

The 12th-century church may have been the work of masons from the Abbey of Bec in Normandy, which held the living of Monksilver from the time of Henry I. The church formed part of the endowment of Goldcliffe Priory in south Wales.

The monastic connection explains why there are so few memorials inside the church; none of the parishioners would have had the right to erect a memorial because the church was directly owned by the Priory (and later, by Eton College and then by the Dean and Canons of St George's Chapel, Windsor).

The present church adheres to a standard layout, with a nave and chancel, south aisle, south chapel, and west tower. The oldest part of the structure is the north wall of the chancel, which dates to the 12th century. The tower is a fairly plain 14th-century addition with a much later battlemented top from a 19th-century restoration. There is a ring of five bells, with the oldest cast in 1548.

It is well worth a walk around the church exterior to see the variety of grotesque carvings just below parapet level. These carvings are mostly strange beasts, but there is one carving of a man suffering from a toothache. It is interesting to see the carving here, in the diocese of Bath and Wells, for a former 13th-century Bishop of Bath and Wells was for many years considered the patron saint of toothache sufferers. 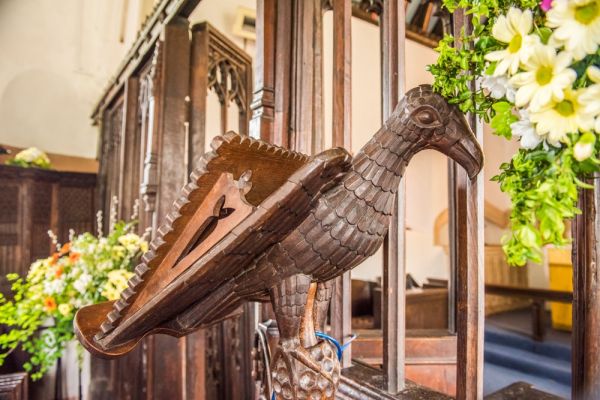 In the churchyard is a weathered cross, erected in 1845 on the site of a medieval cross.

The medieval door still survives with its original ironwork, including a sanctuary ring. Criminals fleeing justice could claim sanctuary if the reached the ring before being caught.

Just inside the door is a Poor Box dated to 1634. A relative newcomer, then, is the communion rail, installed in 1717. Nearby in the south chancel wall is a very simple trefoil-headed piscina. Opposite on the north wall is a rather peculiar tomb-like structure with an ornately carved base.

This may be an Altar of Repose or an Easter Sepulchre, and dates to the late medieval period. If so, it is a remarkable survivor, for most ceremonial Sepulchres were destroyed at the Reformation. It may have survived because it was thought to be a tomb chest by the iconoclasts.

There are just 21 wooden eagle lecterns in England, and Monksilver has one of them (though it is possible that only the body is original and the remainder has been restored). 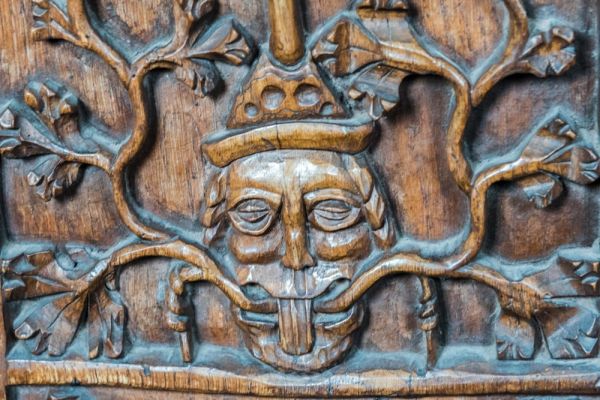 One of the best features of the church is a long, beautifully carved panel that separates the nave pews from the south aisle. It may have been the front facade of the medieval gallery moved here during the Victorian restoration. The carving is exquisite, with beautiful foliage designs, animals, and a Green Man with vines issuing from his mouth.

The south aisle is the subject of local tales. The stories say that the aisle was built by a local blacksmith who came into some money. But just how did he become wealthy? One version says that he was walking to Taunton when he chanced to rest in a sheltered grove where he discovered a hoard of coins hidden by thieves.

Another version says that he ordered a package of iron supplies from Bristol but when it arrived the bundle proved to contain gold. Whatever the origin of his wealth, he used some of it to erect the south aisle.

All Saints is a delightful church, well worth a visit for its wonderful array of carved bench ends, pulpit, and grotesque exterior carvings. The church was open when we visited. 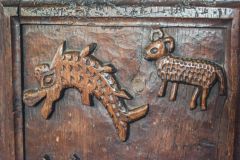 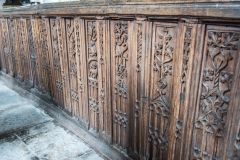 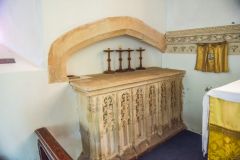 More self catering near Monksilver, All Saints Church

More bed and breakfasts near Monksilver, All Saints Church