HERITAGE HIGHLIGHTS:   The bridge may be 3000 years old 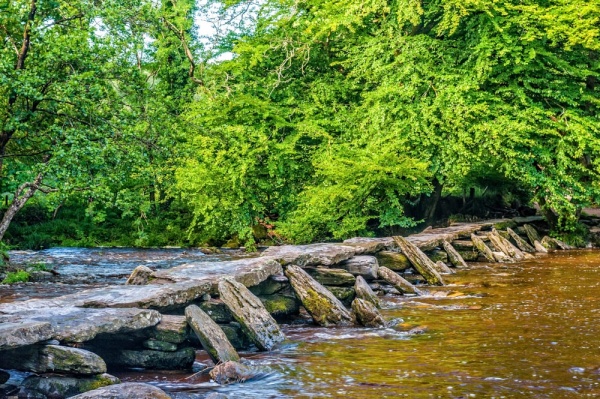 Tarr Steps is a 55m (180ft) long clapper bridge across the River Barle just west of Liscombe village, in the southern region of Exmoor National Park. The bridge is built with 17 large stone slabs laid end to end and supported on stone pilings. The pilings, in turn, are buttressed by 'raking stones' to protect against the force of the water. The bridge ends in a causeway, or raised bank.

The bridge lies very low in the water, with the clapper stones less than 1m above the water level. This means that in times of flood the water washes over the bridge, and often causes damage to the structure. Beside the clapper bridge is a shallow ford, but this is really only suitable for four-wheel-drive vehicles.

Tarr Steps is the longest clapper bridge in Britain and has been drawing visitors since at least the 19th century and is probably the most frequently photographed attraction on Exmoor. It has been listed Grade-I by Historic England for its historical interest.

The bridge stands at the heart of a National Nature Reserve woodland area owned by the Exmoor National Park Authority. The reserve takes in 33 hectares of woodland surrounding the river and the bridge itself. The reserve provides habitat for woodland creatures such as dormice and the rare barbastelle bat, and otters can be found along the river banks. The woodland also creates the perfect environment for liverwort, mosses, and lichens, and the woods are lush with bluebells in spring. The woodland was traditionally managed by coppicing to provide charcoal for the local iron smelting works. 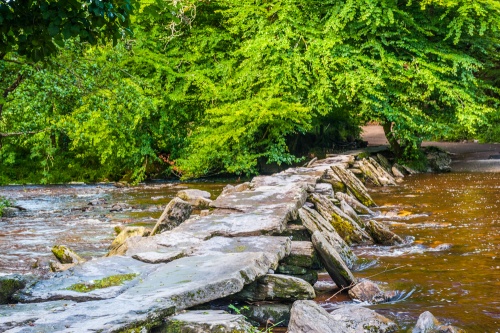 Looking west across the bridge

Can you cross the Bridge?

Yes, you can, and it is not difficult in the slightest. The clappers are wide and you can easily pass by someone coming the other way. Do be aware if there has been recent rain, for the clapper surfaces can become slippery. Even if you did somehow manage to fall in the river is so shallow that you would be perfectly safe.

How Old is the Bridge?

The simple answer is that we don't know for certain. It was certainly in existence by early medieval times, and it seems likely that it has been built and rebuilt for thousands of years before then. The most extreme estimate is that the first bridge was erected around 1000 BC, making it approximately 3000 years old. Yet another theory is that the bridge 'only' dates to about 1400.

The 'Tarr' part of the bridge name may come from the ancient Celtic word 'Tochar', meaning a causeway. If true, this would suggest that the bridge indeed has an ancient origin. On the other hand, the first written record mentioning the bridge comes from Tudor times.

What is a clapper bridge?

Clapper bridges are bridges made with large stone slabs without any form of mortar for bonding. The name comes from the Latin term 'claperius', meaning a pile of stones. An alternative explanation is that the term comes from the Saxon word 'cleaca', meaning 'bridging the stepping stones'. That would suggest that the first clapper bridges were made by simply laying flat stone slabs on existing stepping stones, making the crossing safer.

Clapper bridge construction is usually very simple and may consist of a single slab spanning a stream. More elaborate clapper bridges consist of several stones laid end to end, supported on stone pilings built up in the waterway below. Clapper bridges are common throughout the south-west of England, with some of the best examples on Dartmoor and Exmoor. According to the Exmoor National Park Authority, there are only 40 clapper bridges left in Britain, and of these Tarr Steps is easily the longest. 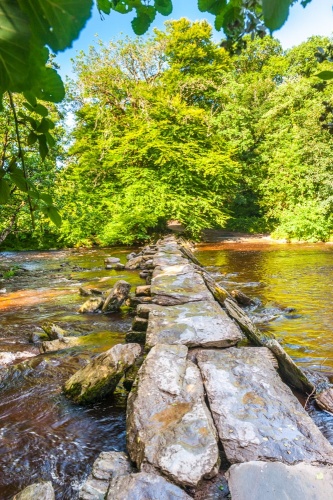 The bridge from the east bank

The Tarr Steps are said to have been built by the Devil so he had a place to sunbathe. According to legend, he would lie on the broad, flat stones to enjoy the sun, and to protect his 'sun-bed' he swore a fearful oath to crush the first person who used the stones to cross from one bank to the other. The local villagers did not dare cross themselves so they sent a cat across the bridge, and the cat promptly vanished (less politically-correct versions say it was torn to pieces).

The local parson stepped in and confronted the Devil in the middle of the bridge. The Devil swore and shouted but the parson stood firm and forced him to withdraw his threat. The Devil added one stipulation, however; no one could cross while he was sunbathing there. So, if you chance to come upon the Devil lying on the clapper stones, don't attempt the crossing!

The Tarr Steps have been damaged by floodwater several times in living memory, including twice within a few years in 2012 and 2016. The force of floodwaters carried slabs weighing 2 tonnes as much as 50m downstream. Work crews restoring the bridge carefully numbered the clapper stones so they could be more easily reassembled in future.

Tarr Steps are easy to reach. The bridge is located immediately west of Liscombe village, off the B3223. Just follow the minor road through the village until you come to a pay and display parking area at the top of the hill, where you will also find toilets. From there a signposted footpath leads downhill, past Tarr Steps Inn, to the bridge. There is a small picnic area on the eastern bank.

The Inn dates to at least the 16th century and provides a wonderful location for a meal, a drink, or to enjoy comfortable accommodation in an unforgettable location. 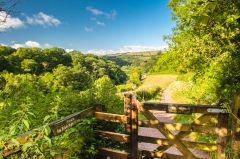 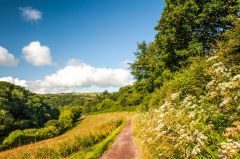 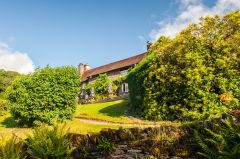 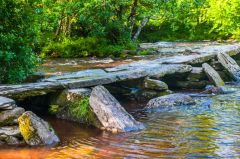 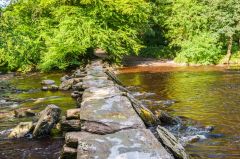 More self catering near Tarr Steps