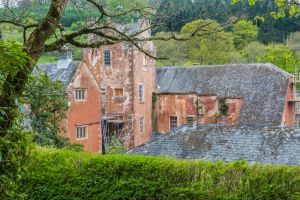 Combe Sydenham Hall
Combe Sydenham Hall is an Elizabethan manor house built in 1580 by Sir George Sydenham, located in a secluded setting in a quiet valley of the Brendon Hills near Stogumber. The house was rebuilt and slightly reduced in size in 1660.

The Combe Sydenham estate was recorded in the Domesday Book of 1086 when the manor was held by William de Moyon, owner of Dunster Castle. From the 15th century, it was home to a branch of the Sydenham family of Bridgwater.

According to legend, the house stands on the site of medieval monastic buildings associated with Cleeve Abbey. A porch was added in 1580, decorated with a coat of arms and the date. Stair turrets were added around 1600.

The manor house was attacked by Parliamentary soldiers during the Civil War. The soldiers destroyed the east bedroom wing and pulled down three of the four towers. Only the west tower was rebuilt in 1660 after the Restoration of the Monarchy.

The manor is approached through a medieval gateway, and the interior features mementoes associated with Sir Francis Drake, who married Sydenham's daughter. Drake was in his early 40s and widowed only six months. He probably married 21-year-old Elizabeth Sydenham, the only child of Sir George Sydenham, to increase his social standing.

Sir George was an immensely wealthy landowner, Sheriff of Somerset, and a Justice of the Peace. It isn't clear where the wedding took place, but it could have been at Monksilver Church, which stands less than a mile north of the Hall.

A local legend gives the story of Elizabeth Sydenham's marriage a dramatic twist. according to the tale, Drake and Elizabeth were both keen for the marriage to take place, but Sir Francis left on a long sea voyage and Sir George took advantage of his absence to persuade his daughter to marry an heir of the Wyndham family. 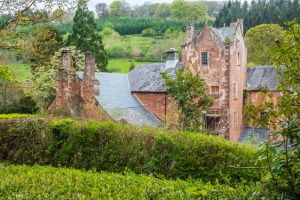 On the wedding day, the couple were approaching St Mary's Church in Stogumber for the ceremony when a meteorite hurtled from the heavens and crashed through the church roof. They took this as a sign to cancel the wedding. On that very day, Drake arrived back in Plymouth and it was not long before he and Elizabeth were married at Monksilver.

The Sydenham family kept the meteorite at Combe Sydenham Hall, where it can be seen today. It is roughly 14 inches across and has been dubbed 'Drake's Cannonball'. It has been worn smooth by being rolled along the ground for centuries.

According to local folklore, Sir George Sydenham's headless ghost rides a phantom horse in the area north of the B3188, heading towards Monksilver.

The Notleys held the estate until 1958. As of this writing, it is owned by the Theed family, who operate 130 acres of the estate as commercial woodland. They keep the woodland open to the public for recreational purposes such as mountain biking and off-roading.

The manor house is set in grounds with a 500-acre estate with a deer park and woodland walks. Closer to the house is an Elizabethan-style garden and a parterre with old roses. The park is open throughout the year, but the house is generally only open to groups of visitors by prior arrangement. 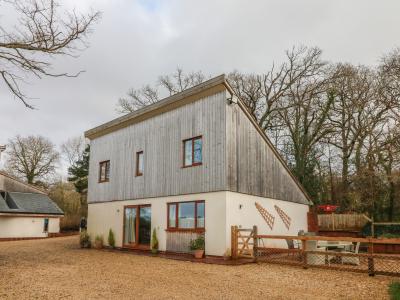 This detached cottage rests near Stogumber, Somerset and can sleep seven people in three bedrooms.
Sleeps 7