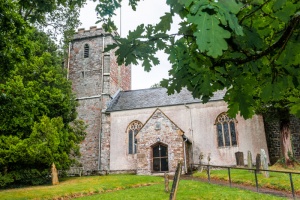 St Nicholas church stands in a small village on the southeastern fringes of Exmoor. The church is 15th century but incorporates parts of an earlier building. The oldest part of the building seems to be the south-west nave wall, which probably dates to the 13th century. The base of the tower is mid-15th century but the top was rebuilt in 1723.

The most interesting historic feature is not in the church at all; in the churchyard stands a huge oak tree, said to be one of the oldest trees in the Exmoor region. In the reign of Elizabeth I the tree was already being called 'the old oak'. The tree has been trimmed back, so it is no longer as widely spread as it used to be.

As you enter through the south porch you will see old village stocks set on the wall. a reminder to miscreants of the fate that awaits them? The studded plank door is medieval, with a late 14th-century handle and ring.

Another fascinating historic treasure is the old parish chest, possibly the oldest in England. The chest dates to the 12th century and was hollowed out of a single oak log. Nearby are two pieces of medieval timber taken from the nave roof during remodelling in 2002. It is fascinating to see how the medieval craftsmen attached the timbers together with wooden pegs. 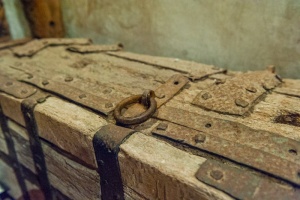 The font is made of Purbeck marble and is probably 12th century. It features a square bowl with blind arcading atop a cluster of 4 slender piers around a huge central shaft. The carving on the shaft base is exquisitely clean and crisp, and the Purbeck marble gleams with the polish of age.

In the south chancel is a piece of medieval glass depicting the Virgin Mary. It was brought here from France and given to the church in 1925 to honour the memory of Evelina, Countess of Carnarvon. Also in the chancel is a window with glass by the William Morris Company, commemorating a young child of the Luard family.

The north chapel is one of the more recent additions to the church but also one of the most interesting. The chapel was designed by architect Sir Edwin Lutyens, a friend of the Herbert family, as a memorial to The Honourable Aubrey Herbert. Herbert was a Conservative MP, diplomat, and explorer, who was famously offered the throne of Albania on 2 occasions. He was also a close friend of writer John Buchan (The 39 Steps), who based the character of his hero in the novel Greenmantle on his friend.

Herbert's effigy was designed by Cecil Howard and lies upon a chest tomb, beneath a canopy designed by Lutyens, and his regimental sword suspended above. The chapel and effigy together form a wonderful piece of early 20th-century art. Also in the chapel are several 16th/17th-century bench ends.

St Nicholas' is one of the most interesting historic buildings in the Exmoor area, and deserves a visit. 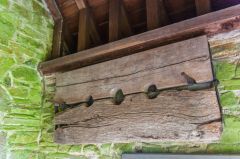 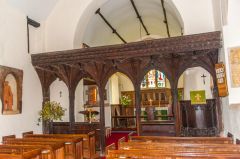 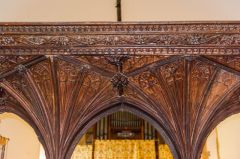 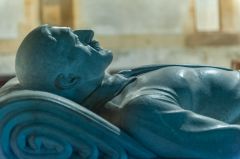